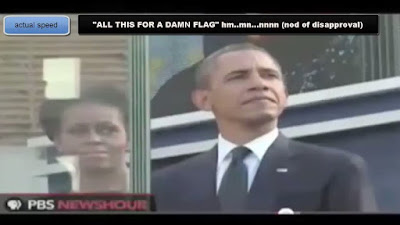 I have never quite understood how Obama could be loyal to the USA.  National loyalty is learned through childhood education and Obama took his in Indonesia while also educated as a Muslim.  He then presented in the USA as a foreign student in order to get the benefits available.   He really missed all that 'American' thing..


Here we catch an exchange that nicely confirms what his natural thinking was.  Again is is not American  Sadly it also informs that Michelle has learned to be Anti American and this is more about her learned racism.


There is much more to this whole picture that we are going to leave out.  It is enough to know their inclinations.

Remember we bring in millions of immigrants into the USA and Canada every year.  None of them will ever be naturally loyal to our countries.  Yet their children will be.  And we obviously need to restore the loyalty of our black population through our education system.

This was during a 9/11 ceremony in 2011, as a honor guard respected our American flag, Michelle turns to Hussein & says: "All this for a damn flag". Look at his expression as he nods in agreement.