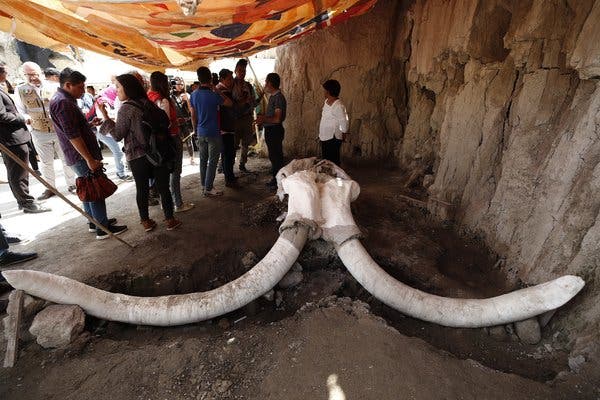 This is important as it clearly points to a working protocol to knock down a mammoth.
It is also very easy to implement.  You know your ground and you set up  a capture trench they cannot avoid.  Then you drive a target into the mouth of capture slot.
This we can assume was universal across the whole range.  Once you understand the method it is also clear that it would be the simplest possible option, short of running them over a cliff.  At the same time, most such traps would be temporary at best and that they would quickly decay simply by the edges caving in.

Thus it is highly likely that most kill sites may well be former slit traps and in fact why we have preserved sites at all.  Open exposure allows full consumption by other scavengers.

Researchers from Mexico’s National Institute of Anthropology and History say the discovery illuminates the relationship between humans and the Pleistocene animals.

Mammoth skeletons were discovered in Tultepec, Mexico.Credit...Jose Mendez/EPA, via Shutterstock

Researchers from Mexico’s National Institute of Anthropology and History say they have uncovered what could be the first human-made traps used to capture the Pleistocene animals.


The finding represents a significant turning point in researchers’ understanding of the relationship of hunter-gatherer bands with the mammoths, Pedro Francisco Sánchez Nava, the institute’s national coordinator of archaeology, said in a statement on Wednesday.


The bones of about 14 mammoths were discovered in two large pits — each about five and a half feet deep and 80 feet long, likely dug about 15,000 years ago — in the town of Tultepec, where a landfill had been planned. 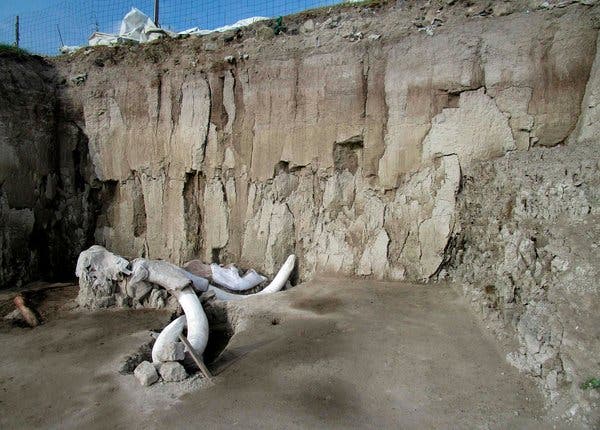 ImageMore than 800 bones were discovered while the town was building a landfill. Credit...INAH/Agence France-Presse, via Getty images

Previously, there was little evidence that hunters intentionally attacked mammoths, an archaeologist with the institute, Luis Córdoba Barradas, said to reporters on Wednesday.


“It was thought they frightened them into getting stuck in swamps and then waited for them to die,” he said, according to The Guardian.

“This is evidence of direct attacks on mammoths,” he added. “In Tultepec we can see there was the intention to hunt and make use of the mammoths.”


Mr. Córdoba said hunters may have traveled in groups of about 20 to 30, and used torches and branches to force animals into the traps. It is possible, he said, that a chain of traps had been built to increase the odds of capturing prey, and that more could be discovered.


Adam N. Rountrey, a collection manager at the University of Michigan Museum of Paleontology, said in an email that the new find was “certainly interesting.”


While there are numerous “mammoth megasites” in Eurasia and North America where humans have “processed” carcasses, he said, “there has been debate about whether the remains represent hunted animals or scavenged natural deaths.”


At this point, he added, none of those sites have been considered human-made pits.


“We are looking forward to seeing a peer-reviewed publication that presents the evidence for human construction of the traps,” Dr. Rountrey said of the site in Mexico.


Woolly mammoths, elephant-like creatures that once inhabited nearly every continent, went extinct about 4,000 years ago. Several competing theories explain their demise, but it was likely a combination of climate change, which created untenable conditions for the animals and also killed off a plant-based diet, as well as the birth of humans that sought their skin and meat.


Recently, scientists have discussed plans to revive the elephant-like animals through genetic engineering. One scientist even dreamed of creating “Pleistocene Park,” a preserve in Siberia where they could roam. So far, no births have been reported. 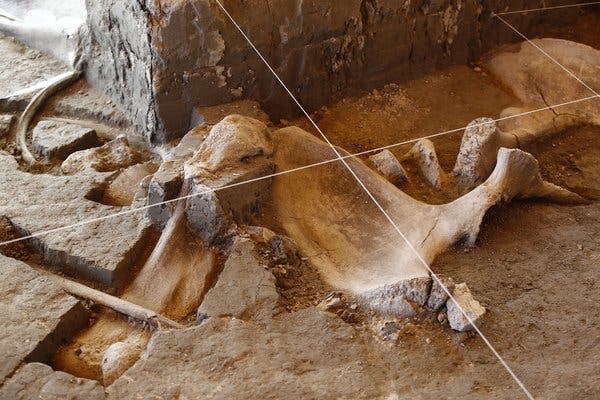 Some of the bones were arranged in a way that suggests they were part of a human ritual, according to a researcher.Credit...Jose Mendez/EPA, via Shutterstock


During the 10-month excavation in Mexico, more than 800 bones were collected, including a camel jaw and a horse molar.


Of the mammoth parts, eight skulls, five jaws, 100 vertebrae, 179 ribs, 11 scapulae and five humeri have been recovered, as well as ulnas (cubes of a long bone), pelvic bones, femurs, tibiae and other small bones, according to the institute.

The animals were likely slaughtered for food, including their organs and the tongue, which could weigh more than 26 pounds.


One of the skeletons had a spear wound suggesting that it took the animal years to die, despite the hunting efforts. The bones of that animal were specifically arranged, said Mr. Córdoba, as though they were part of a ritual honoring it.
Posted by arclein at 12:00 AM