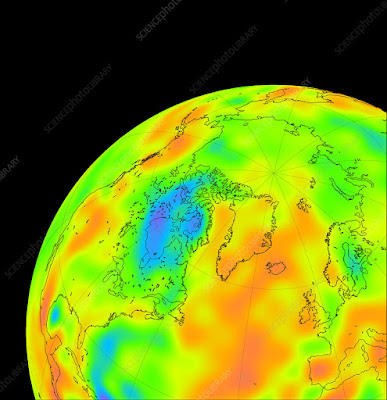 This item makes an important statement, It is that we are missing gravity from the whole region of the Hudson Bay and apparently this is unique to the whole earth. The proffered explanations are not really convincing either and are likely nonsense just to keep you happy.   The fact is that we are missing expected mass.
As I have posted extensively, this is the expected location of a crustal throat that connects our surface with the interior of  the planetary crust.  The crust itself was physically moved in 12900 BP in order to end the Ice Age.  Thus we were able to calculate the location of this throat from massive amounts of conforming external data.  I do expect to find an additional locale in Antarctica as well but i do not expect an oceanic connection there.

The Great Flood was supplied by water pouring through this throat after the crustal movement to flood all the lands massively and to accommodate their return as well.  This process necessarily left behind a sediment and mud plug within the throat augmented by the two thousand year collapse of the ice sheets.  We have statements in the cultural sources of waters coming up from the deep.  They got it right.

The gravity of the throat would also have an odd geometry as well, but what is important is that the plug must be much less dense that typical sedimentary stacks and this gives us a lower gravity signature as now discovered but predicted by my work on the Pleistocene Nonconformity.
Please understand that this was one of my targeted disproofs of the both the historic Hollow Earth conjecture and the Crustal Shift conjecture as well.  One never needed the other, but both needed really good conforming geology in Hudson Bay.  I also think that we have it in Antarctica as well but not nearly as clear as this is..
.

THE mystery surrounding a strange place on earth where gravity barely exists has finally been solved by a crack team of scientists.


For more than 40 years experts were baffled by an “anti-gravity zone” surrounding the Hudson Bay are in Canada, with some conspiracy theorists even claiming the spot might be a portal into another dimension.

Scientists conducting a global gravity field survey first noticed the strange anomaly in the 1960s but have been unable to explain why gravity is so much weaker in the Canadian region – until now.

It has been revealed that the Laurentide Ice Sheet, which covered much of present-day Canada and the northern United States, was so large that it dented the earth 10,000 years ago, literally bending gravity. 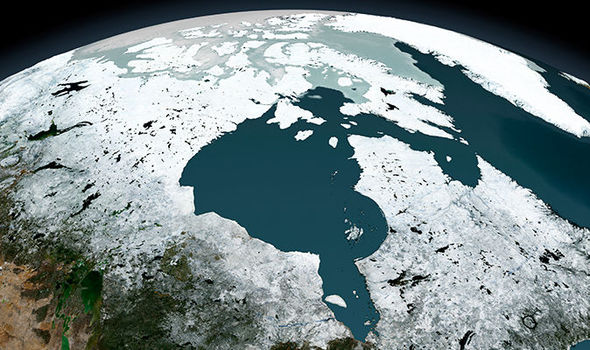 GETTYHudson Bay, Canada, has been found to have less gravity than anywhere else in the world


The earth is taking a long time to bounce back, currently it flattens by around half and inch a year, which is minuscule when compared to the amount of pressure it came under from the monumental ice sheet, which was 2.3 miles thick.

Scientists believe it will be 5,000 years before it has recovered to a normal level of gravity.

Until the deep indentation in the earth is flattened out, gravity in the region will always be less than anywhere else in the world.


Scientists believe a mssive 10,000-year-old glacier is responsible
But there is also another reason why the Hudson Bay defies the laws of physics – it is a convection current hot spot.