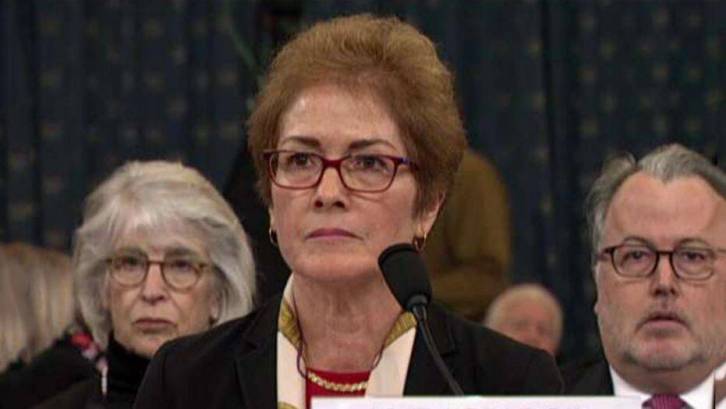 This is not amusing at all.  Quite obviously, Madame Secretary spread the lolly around the State Department to ensure lifer loyalties to her agenda.  The coin came from our one and only George Soros and that was likely sourced by a true enemy of the USA.

Now these fools are been trotted out to provide a smokescreen as much as may be possible.

In the process we have winkled out the amazing business conducted by the Bidens both here and in China.  Hilary sure had to win in 2016!!.

This exercise is disclosing massive questions regarding management at the State Department.  It is completely possible that corruption has been endemic there for decades.  That means that it will need to be reorganized top to bottom..

For now, it comes down to this: the US State Department is at war with the White House. State’s allies in the Democratic majority congress want to help overthrow the occupant of the White House because he’s interfering in the department’s foreign policy. The lifers at State are the same ones who executed a coup in 2014 against Ukraine’s government and threw out the elected president Victor Yanukovych because he tilted to join a Russian-backed regional customs union rather than NATO. State’s diplomatic lifers are old hands at coups. Now they’re at it at home, right here in the USA.

Ever since the Maidan Revolution of 2014, they have worked sedulously to exert control over Ukrainian affairs. And they especially can’t stand that the recently elected president Zelensky declared that he wants to improve his country’s relationship with next-door-neighbor (and ex-sovereign) Russia. The occupant of the White House, Mr. Trump, had often expressed a similar interest to improve the USA’s relations with Russia. State would prefer to amp up a new cold war. Mr. Trump has some nerve interfering with that!

Modest, professional, lacking any conflict of interest whatsoever, the face of your Diplomatic Corps, Marie Yovanovitch.


The lifers at State also have something to hide: their exertions to connive with Ukraine government officials they controlled to interfere in the 2016 US presidential election in favor of their former boss, Mrs. Clinton. The current impeachment spectacle is an attempt to pitch a smokescreen over that embarrassing mess, which includes the CIA’s and FBI’s efforts to blame Russia for their own illegal interventions in the 2016 election — the heart of the three-year impeachment narrative. The Joe-and-Hunter Biden affair is the left anterior descending artery in that heart.

The current testimony in the House Intel Committee raises another question. Whose back-channel diplomats are legitimate in US foreign policy: Mr. Trump’s personal lawyer, Rudolph Giuliani, or State’s own boy, billionaire freelance international political adventurer George Soros? The president dispatched Mr. Giuliani to Ukraine because he didn’t trust the State lifers to get to the bottom of the mischief emanating from Kiev during the 2016 election, in which State lifers played an active role, along with Mr. Soros and his agents — in particular an outfit called the AntiCorruption Action Center, jointly funded by Mr. Soros and State (i.e. US taxpayers).

Mr. Soros’s AntiCorruption Action Center was one entity that then US Ambassador Marie Yovanovitch submitted to Ukraine’s then General Prosecutor Yuriy Lutsenko on a “do not investigate” list, according to reporter John Solomon (story here). Solomon writes:


In other words, State was confirming its own embassy had engaged in pressure on Ukrainian prosecutors to drop certain law enforcement cases, just as Lutsenko and other Ukrainian officials had alleged…. More recently, George Kent, the embassy’s charge d’affaires in 2016 and now a deputy assistant secretary of state, confirmed in impeachment testimony that he personally signed the April 2016 letter demanding Ukraine drop the case against the Anti-Corruption Action Centre.

Translation: an activist US embassy meddled in Ukraine’s internal political affairs. That’s a breach of international law. No doubt Marie Yovanovitch will be asked about these matters starting in about 15 minutes from as I write. Mr. Soros funded a network of nonprofits operating in Ukraine going back a decade, including the International Renaissance Foundation, the Open Society Foundation, Project Syndicate, and the CIA-connected Atlantic Council, which also received millions in support from Ukrainian gas pipe oligarch Victor Pinchuk. (Guess who else is a consort of the Atlantic Council — International Man of Mystery and 2016 election meddler Joseph Mifsud.) In 2015, Pinchuk paid $150,000 to Donald Trump’s foundation for Mr. Trump to speak by video-link to a Kiev conference for strengthening Ukraine’s ties to the West. At the same time, Pinchuk had contributed $25 million to the Clinton Foundation.

As you can see, the relationship between Ukraine and the USA since 2012 has developed more rabbit holes than Watership Down. Ukraine also happens to be an economic basket-case with a GDP equal to about half the GDP of Connecticut. Poor Ukraine, a semi-failed state of our own making, used by the State Department as a launching pad for intrigues against both Russia and the President of the United States. Maybe Mr. Trump sincerely wants to clean up that mess and shut down the State Department’s rogue outside operations channel as represented by George Soros. If only they can get rid of Mr. Trump, wouldn’t that make everything just peachy again? (Though probably not so much for Ukraine.)
Posted by arclein at 12:00 AM