The Hollow Earth Science Is Real, Let's Go Through ALL The Evidence 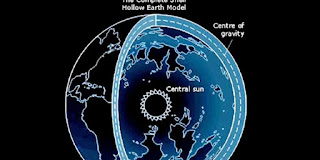 The huge take home in this presentation is quite amazing.  We discover that the missing xenon is locked up in combination with both iron and nickle to produce a terribly dense crystalline material the is also stable and extreme high temperatures.  This is all new work during the past decade.

With that it becomes plausible for the outer crust to form a cooling skim atop of our planetary core which is then left behind as the core then shrinks to form a separate heat source inside what is now a hollow earth.  The separation is likely quick in terms of geological time and the outer crust may also significantly expand as well.   The outer crust may have expanded quickly in the early stages as well when it was all elastic and hot.

This can produce a huge void.  The inner surface of the crust will experience one g of gravity toward the crust itself while the core will have its own gravity signature as well.

The bottom line is that we may have now a model that depends solely on Newtonian physics. and our knowledge of nuclear process.  After all, iron and nickle are the end points of the formation process of the nuclear process.  Thus a lot of nickle and iron is expected.  I never thought we could get here from there at all.

Better yet, those living on the inner surface will experience a heat related spectrum from the center core which may be red hot.  Yet water will serve to moderate the temperature range of this surface which will still be distant from the surface of the core.

It is also plausible that the outer crust has also been elastically expanding over geological time as well..

At least the pictures are getting better.

Arclein, through Freedom's Phoenix I usually read a post or so of yours about once a week. You have presented some great stuff and I appreciate your sharing proclivities.

Rest assured, Hollow Earth is a low point in your intellectual life.

The light elements which form t he the outer crust are there because the gravity well of the Earth has left them there by consolidating all the heavier elements beneath them.

This leaves a crystalline shell which is simply unable to span unsupported the circumference of the Earth. In fact it crumbles and we see the result as plate tectonics.

You cannot overcome this fundamental set of factors. Only by puffing on silly stuff can you imagine, briefly, a different reality.

There may indeed be some voids within the crust which are pretty large, or interlaced. But that is as far as you can take this Puffy Pie.

It is simply not that easy. I wish it were. Our own 'knowledge' is an extrapolation of Newtonian physics and assumptions regarding gravity itself. On the basis of just that, i have dismissed the whole hollow earth meme as nonsense for over fifty years.

More recently my own work on cloud cosmology provided a radically different genesis modality for planet and star formation which allows for a hollow architecture and may plausibly demand it. The actual nature of gravity itself is completely different than the Newtonian concept. Thus I was forced to confront the plausibility of a hollow earth and i will leave it at that.

That still leaves us the problem of mass and this discovery of the high temperature Xe Fe Ni complex came as a complete surprise. this produces a natural mass core with a likely separate shell of other material. Natural densities and ample time does suggest that separation is plausible and the huge amount of core material is indicative of a massive time span to produce that material.

In other words we have another Newtonian route to the Hollow Earth conjecture.

By the way, i do not ask anyone to actually believe this. What this does do is allow us to review known cultural resources which should not exist with an open mind and plenty of curiosity. My point is that i have moved on from complete rejection based on classical thinking to plausible possibility based on both classical physics and my own Cloud cosmology.

Even then it still seems impossible.