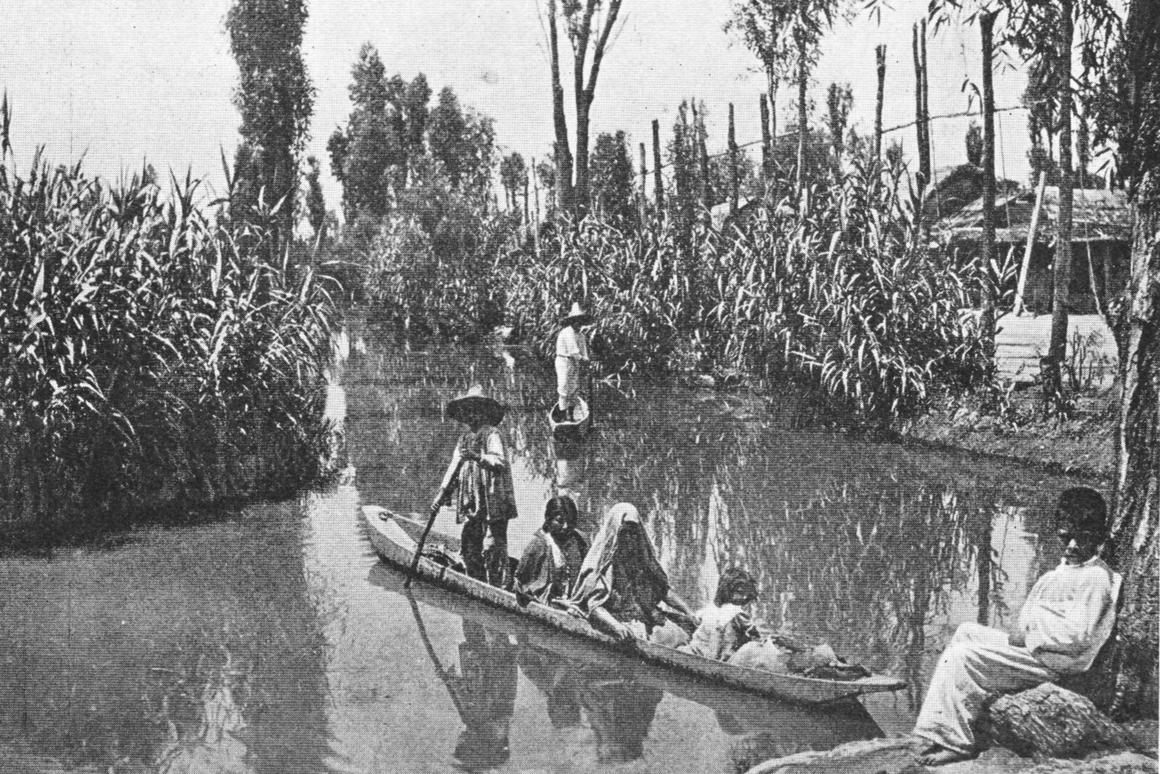 What the future is bringing is the advent of agricultural robots quite able to apply technology and repetitive labor to advanced gardening systems.  Thus converting wetlands into this type of system can become easy enough.  A lot we can do now.
The robots will eliminate the problems of mono-cropping in particular by the simple ability to address each plant..
optimizing wet land agriculture is overdue but demands technology which is simple enough.   governments will need to promote it though as the land unit is still small and family organized not unlike a family garden on any farm..


By 2050, the UN thinks there will be nearly 10 billion people on planet Earth, with 68 percent living in urban areas. Both numbers pose serious questions as to how we'll feed the growing, urbanizing population. New research explores whether traditional farming techniques could hold one answer to feeding the cities of the future: traditions that date back to the Aztec civilization.


It's all to do with chinampas. These raised fields built on artificial islands sound almost too good to be true. Often fed by a network of canals and dykes, they apparently afford "extremely high" productivity in exchange for relatively modest irrigation needs, thanks in part to the capillary action of the plant roots.

Other benefits to farming include "better drainage, soil aeration, moisture retention during the dry season, and higher and longer-term soil fertility than in conventional outdoor production," according to a press release accompanying the research. More far-reaching benefits are thought to include regulation of water levels and microclimate as well as boosts to biodiversity and carbon storage. 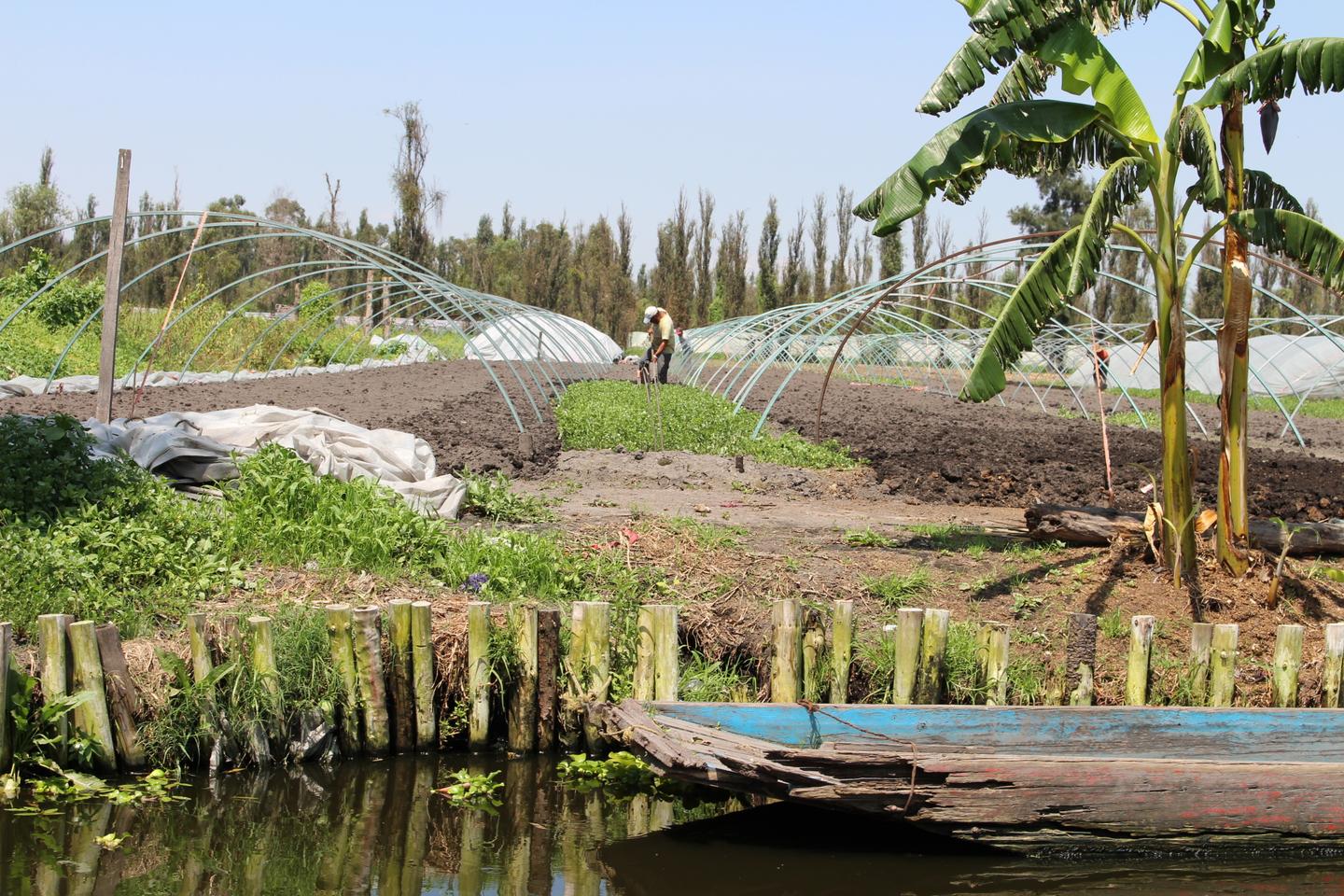 
The research, which draws on a number of existing studies, has been done by Postdoctoral Research Associate Roland Ebel who explores the fields of agroecology and horticulture at the Sustainable Food Systems Program at Montana State University. Much of the information reviewed had only previously been available in Spanish.

Ebel spent 11 years in Mexico studying Mesoamerican farming. The study is the result of a 2018 talk he gave to the American Society of Horticultural Sciences in Washington DC in 2018, where it became clear to him that chinampas weren't well known in the scientific community.

He argues that chinampas are one of the most productive intensive agricultural systems ever devised, scoring high on sustainability to boot. Their artificial canals play a significant role. Not only can the earth dug be used to build the raised islands and fields, but they also contribute to the fertility of the chinampa system. With the right crop rotations, chinampas can result in seven harvests a year.

And they're still in use today – notably in the case of Xochimilco, a suburban region in the southern valley of Mexico City. Chinampa systems in the region date back to the Aztec period between 1325 and 1521, though the land used decreased markedly in the 20th century as the population of the city exploded. Crops grown vary from ornamental flowers to legumes, tomato, pepper, lettuce and radish. 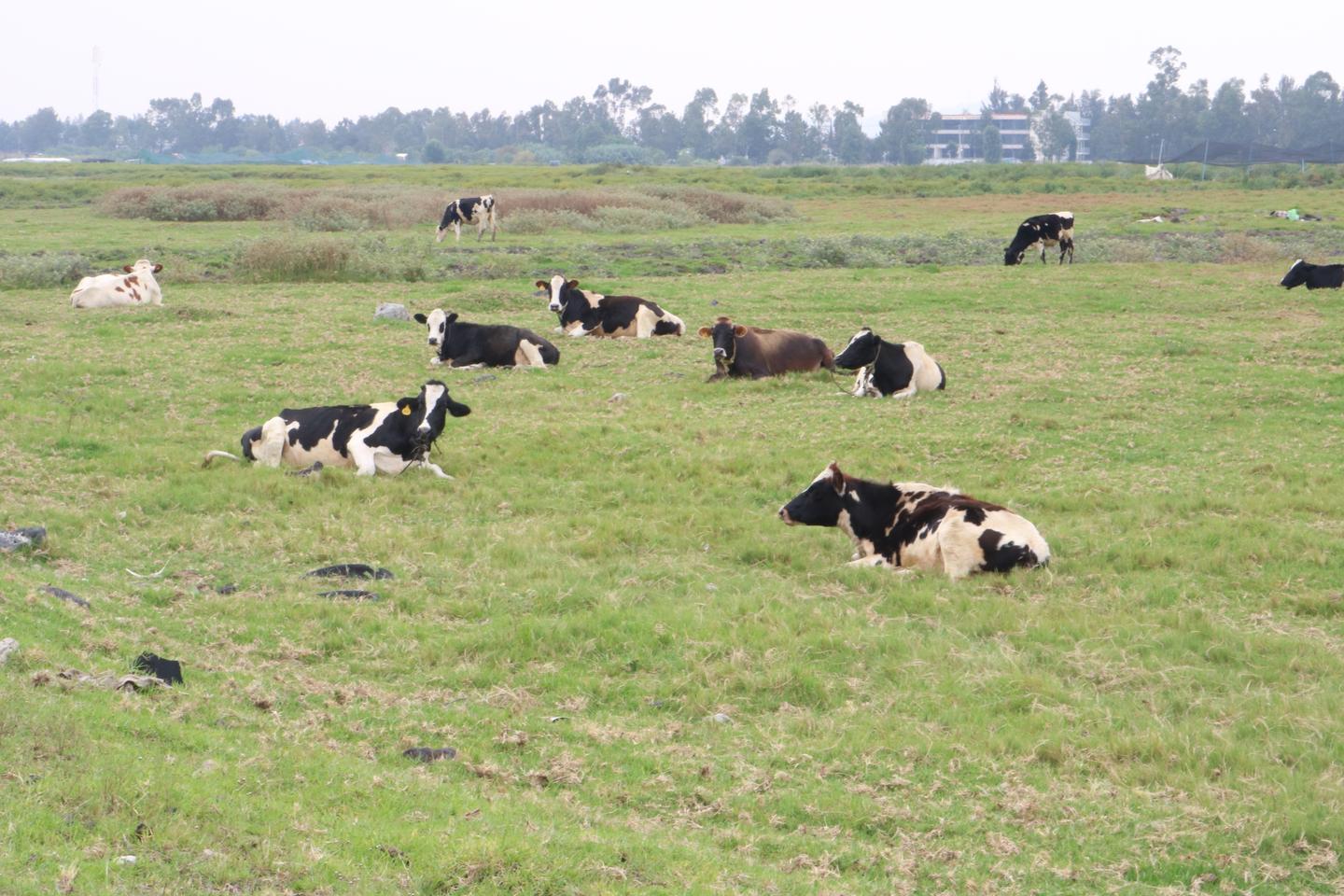 They're also used to raise animals – mainly chickens but also ducks, pigs, sheep and even cattle, which are sometimes allowed to roam free-range, or kept in enclosures between areas of cropland. But benefits go beyond agriculture, with today's examples raising more money through tourism than through food production thanks to an increasing interest in indigenous tradition. 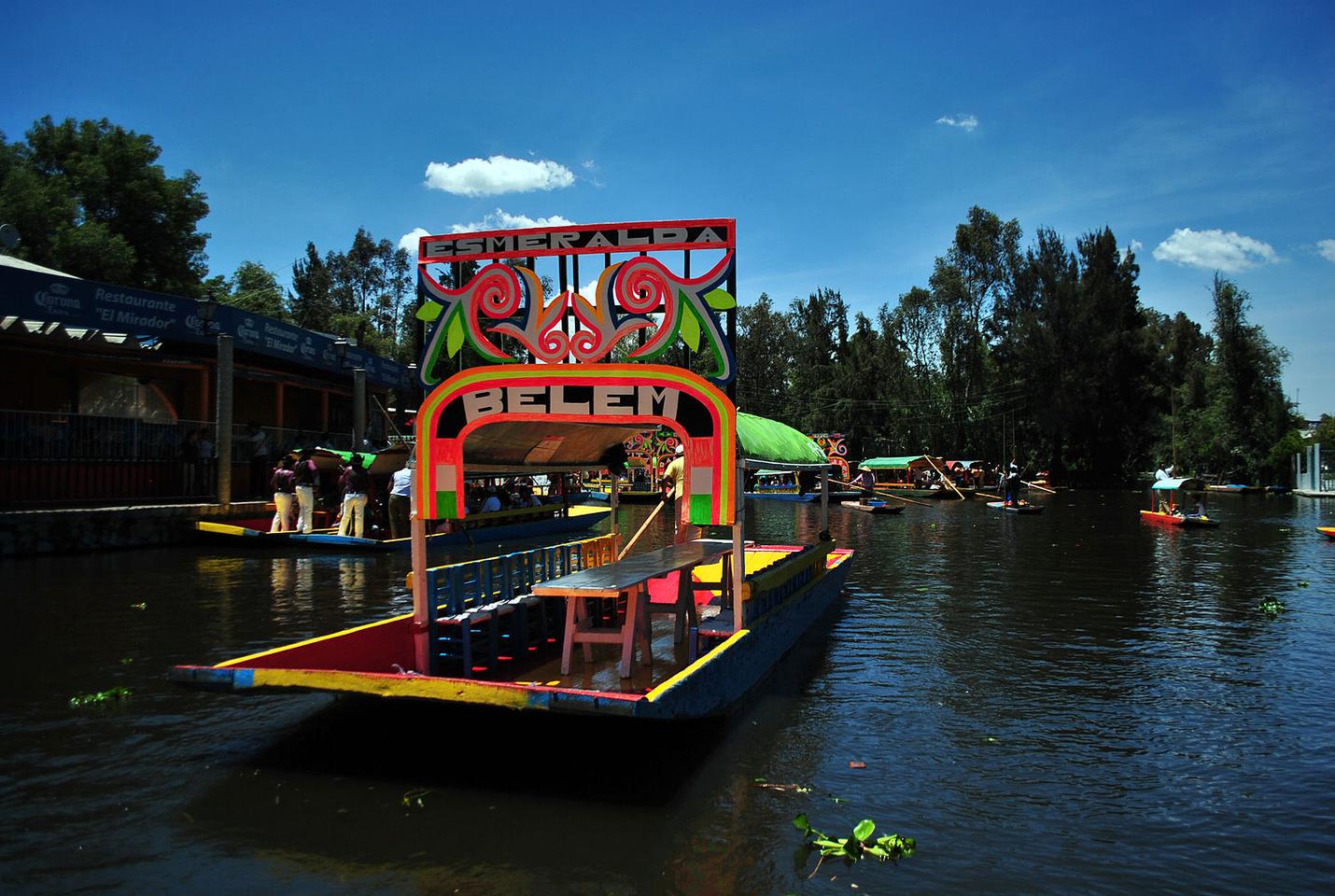 With a population of more than 21 million people, the Mexican capital is already massive. But Ebel thinks that chinampas are a viable choice for many of today's growing cities – specifically those with a nearby freshwater lake.


Today there are thought to be several examples of small farms applying chinampa systems across Latin America, while related raised field approaches are being tried as far afield as Indonesia and Bangladesh. In the latter case, it's hoped farming on artificial floating islands held afloat by second-hand plastic containers could contribute to food supply in the face of the climate crisis. Meanwhile, a number of floating garden schemes are appearing in Europe and North America, though Ebel notes these tend to be for recreation rather than horticulture or farming.

Not all attempts to implement chinampas have been successful, though. In Mexico, attempts to replicate the Xochimilco template in the states of Veracruz and Tabasco struggled, in part due to incorrect dredging which brought infertile clay to the surface. Ebel explains that the Veracruz experiment failed outright because the scheme's managers overlooked the need to involve local farmers. The efforts at Tabasco were partly salvaged by local initiatives seeking to avoid similar mistakes.

Though these examples can't be said to have failed due to failings with chinampas themselves, the outlook for these traditional techniques is bleak. The 20th century trend of housing replacing chinampas in Xochimilco looks set to continue, with most chinampas on course to disappear by 2057.

"While most strategists emphasize high-tech solutions such as complex vertical farms, I think it is worthwhile to learn from the achievements of our ancestors," Ebel argues in the release. "A restored use of chinampas would allow intensive production of fresh vegetables close to Mexico City, avoiding transport needs and avoiding negative consequences on produce quality and greenhouse gas emissions," he adds.

Whether large-scale chinampas are truly a viable or desirable option across the world is perhaps open to question. There are surely questions as to the environmental impact of such a dramatic change in land use. But Ebel maintains they're an option that should be explored. 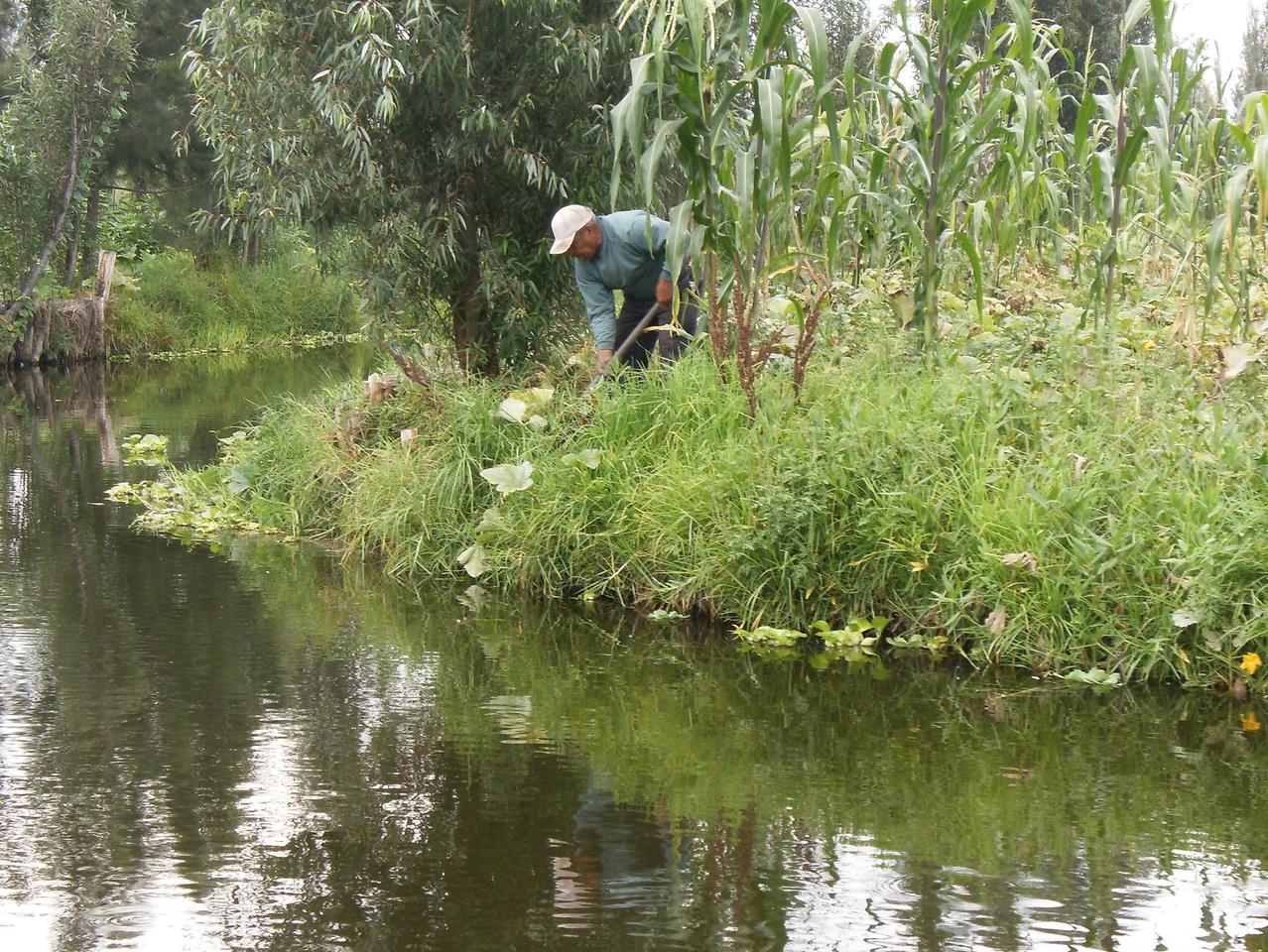 One of Xochimilco's remaining chinampas

"There are many big cities in the world which are close to freshwater reservoirs, where similar production systems could work," he tells New Atlas. "There are numerous (traditional and modern) versions of chinampas developed in different parts of the world, commonly resumed under the label 'raised fields.' Wherever they are feasible, chinampa-like systems can contribute to local, urban food production, reducing transport needs and, therefore, greenhouse gas emission."

Further, Ebel argues that there are massive environmental benefits to adopting traditional farming methods. "In high-income countries, the productivity of farms is satisfactory – but their resource-efficiency is incredibly poor," he tells New Atlas. "Ten times more freshwater evaporates on our fields than is actually absorbed by the crops. We also do not need to ship fertilizers and pesticides around the globe when most plant nutrients can be found locally and all nutrients can be recycled on-farm."

He goes on to cite direct experience of locally-sourced natural fertilizers which, used in combination with diverse crops, render pesticides next to unnecessary. "We need to understand that pests and diseases are the direct consequence of monocropping," he explains.

Chinampas and systems like it may constitute a change in land use, but Ebel argues they are much closer to natural ecosystems than industrial farms. "Together with our 21st-century science skills, traditional knowledge should be used to reduce the waste of resources on our farms," he adds. But for Ebel, our eating habits are also part of the problem. "Ultraprocessed food does not feed us, it makes us sick," he asserts.

But the loss of chinampas in Mexico would seem to be a specific cause for alarm – especially in light of the myriad benefits these traditional farming techniques have brought to the region for centuries. "It is important to conserve chinampas where they came from," Ebel responds. "This is hard enough: Chinampas depend on freshwater. They tolerate a certain organic matter content as it is common in urban areas but are sensitive to salinity and other types of contamination. Freshwater contamination has become a serious issue in the Mexico City metropolitan area. Chinampas are also threatened by an ongoing urbanization process, where housing areas expand at the expense of space for producing local food." He also argues for political change to "restore the food sovereignty of developing nations."
Posted by arclein at 12:00 AM