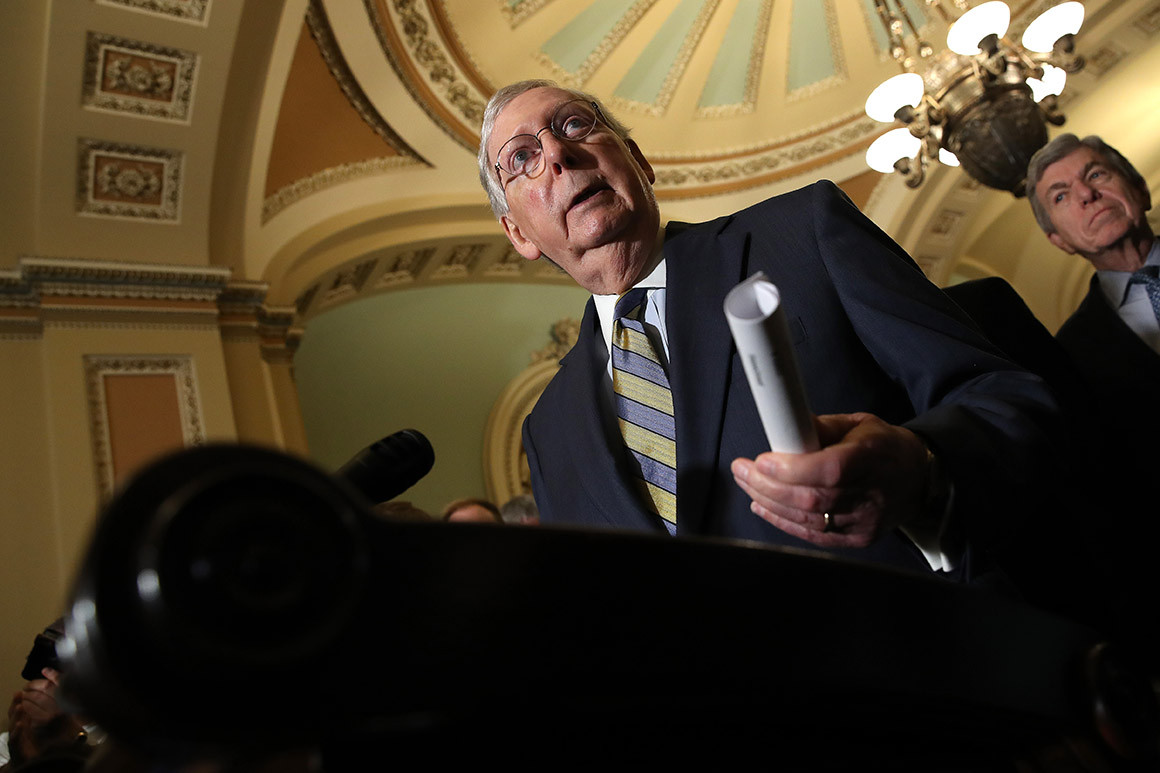 Unless the DEMs are insane, they must wiggle out of this.  They may not be able to now.

What is going to happen is that we will now get the trial that is called for.  Real witnesses will be called, and real perjury and collusion brought up and referred to the DOJ. Far Worse, Joe Biden and his son will be forced to answer questions.  It may also draw in Obama.  In the background, Durham will be arresting folks identified by the IG report.

All this can be used to fill the press during the first two months of the Primary season.  All the while Trump can drift above it all..

White House officials and Republican senators agreed the Senate should not immediately dismiss any articles of impeachment against the president.

Top White House officials and Senate Republicans on Thursday agreed that a full trial should be conducted if the House impeaches President Donald Trump, according to multiple people familiar with the matter.

Two attendees said that the White House wants the Senate to hold a trial of some length and not immediately dismiss any articles of impeachment with the GOP's majority, as some Republicans have suggested.

The White House and Trump's GOP allies decided instead “they want some kind of factual affirmative defense on the merits," said one attendee.

One attendee noted that the White House wants to show a commitment to due process, particularly since Republicans have criticized House Democrats for how they've conducted their impeachment proceedings.

Senators also informed the White House that there simply aren't the votes to approve a motion to dismiss the trial; it would take just three Republicans to block any impeachment vote on the Senate floor.

“Different people have different opinions of what to do but the main message [is] that a motion to dismiss won’t fly,” said a second attendee. “They understand it because we’re hitting the House on lack of due process. Most trials you at least hear the evidence first.”

A White House official said the meeting "wasn't so much about the details, it was about the Democrats' weak case and we want to show just how weak it is."

The move puts the White House on the same page as Senate Majority Leader Mitch McConnell (R-Ky.), who has previously expressed skepticism about a swift dismissal of the charges and warned his caucus at a GOP lunch last week against putting up motions that could divide the party.

The Republican senators who attended the meeting Thursday were Mike Lee of Utah, Lindsey Graham of South Carolina, John Kennedy of Louisiana, Ted Cruz of Texas, Tom Cotton of Arkansas and Ron Johnson of Wisconsin.

House Democrats are moving quickly in their impeachment inquiry, which centers on evidence that Trump abused the power of his office by pressuring Ukraine to investigate his political rivals.

Hogan Gidley, principal deputy press secretary for the White House, said on Fox Thursday that if the House moves forward with impeachment Trump "wants a trial in the Senate."

Democrats secured what they felt was a bombshell during this week’s public impeachment hearings, when Gordon Sondland testified that the president withheld a White House meeting — and potentially military aid — unless Ukrainian President Volodymyr Zelensky announced an investigation into his political rivals.

“Was there a quid pro quo?,” asked the ambassador to the European Union. “The answer is yes.”

But despite damning testimony from Sondland and others, Trump’s support in the GOP-controlled Senate remains strong. While some Republicans say that Trump’s request for Zelensky to investigate Joe Biden and his family was inappropriate, they argue it’s not an impeachable offense.

McConnell has repeatedly predicted that the Senate will acquit Trump in an impeachment trial.

Still, the president is keeping close tabs on Republican senators, many of whom have noted they will play the role of “juror” in any Senate trial.

Trump has hosted more than 40 Republican senators at the White House this fall, mainly for lunch. Thursday’s lunch included Republican Sens. Mitt Romney of Utah and Susan Collins of Maine, Trump’s most frequent GOP critics in the Senate.

Since the impeachment inquiry began, Trump has also taken lawmakers to the World Series in Washington, D.C., the Ultimate Fighting Championship in New York City and the Alabama-LSU football game, according to White House official.

While the House is all but certain to impeach Trump, many of the details of any Senate action — like the length of the trial or what types of amendments to trial rules or witnesses to consider — have yet to be hashed out between McConnell and Senate Minority Leader Chuck Schumer (D-N.Y.).

Senators acknowledged this week, however, that the impeachment trial will likely take place in January, a potential dilemma for the half dozen senators running for president.
Posted by arclein at 12:00 AM