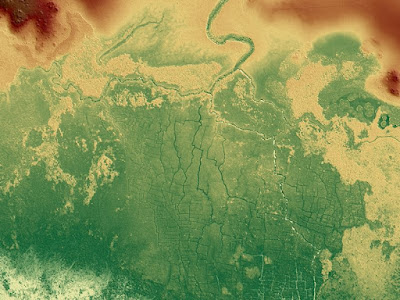 We are in the beginnings of what will be a complete revolution in understanding settlement patterns globally.  I do consider that the Key time window remains the global Bronze Age.  My reason for this is that this was well before that advent of  horse based mobility which turned civilization upside down over huge areas.

Prior to that the global Sea trade brought knowledge and trade to all districts sooner or later.  This may well have not stuck, but the possibility would be there.

We are going to find massive land use everywhere convenient throughout the Americas.  What we are lacking is any such development associated with the Earlier Bronze Age.  What we have appears to be echo civilizations that followed the trade driven Atlantean world.

Otherwise the data keeps coming and we now seeing plenty of surprises.


One agricultural network was 5 times larger than earlier estimates, and the fields may be an early source of human-caused greenhouse gas emissions. Researchers used lidar to create this digital elevation map of an agricultural network. A web of canals divides ancient farming fields fed by the Rio Bravo (top of image). Two ancient Maya settlements are just beyond the upper corners of the image. Credit: Timothy Beach, Sara Eshleman, Samantha Krause, Sheryl Luzzadder-Beach, and Colin Doyle


By Jenessa Duncombe 12 hours ago

Ancient Maya civilization thrived for thousands of years beneath the cover of tropical forest in Central America, but once their civilization disappeared, so did much of the evidence of it. For a century, researchers slogged through dense tropical brush to study Maya sites, a laborious and slow-going process.


That all changed when scientists began using lidar, a remote sensing technique that shoots lasers from low-flying planes. By measuring a laser’s travel time, scientists can determine the shape of the ground within a few centimeters and create a picture of the landscape stripped bare of vegetation. In Central America, the technique has exposed thousands of structures previously concealed by the forest canopy. The latest study used lidar to uncover a network of ancient canals and farming fields in the low-lying wetlands of northwestern Belize.

The latest study used lidar to uncover a network of ancient canals and farming fields in the low-lying wetlands of northwestern Belize. According to previous research, these fields may have held maize, arrowroot, avocado, and other crops, and new dates from the study show that the fields were heavily used between 1,800 and 900 years ago. The researchers discovered four distinct farming networks in the area, one of which was much larger than earlier estimates and another that the scientists hadn’t known existed.


The findings suggest “early and extensive human impacts on the global tropics,” according to professor Tim Beach from the University of Texas at Austin and lead author on the paper published in the Proceedings of the National Academy of Sciences of the United States of America. The researchers hypothesize that cultivating the wetlands for farming could have caused carbon dioxide and methane emissions and may be one source of early greenhouse gas emissions from humans.


Researchers had known for decades about the suspiciously straight-running channels east of two ancient Maya settlements, Akab Muclil and Gran Cacao, but couldn’t rule out natural causes. For the latest study, they flew 570 meters above the suspected sites and sent out more than 6.5 billion lidar pulses.


The most well studied area in the paper was the Birds of Paradise wetland network that stretched 5 square kilometers and had a maze of canals that ran for 71 kilometers. Beach and his colleagues had been studying the area for 2 decades but didn’t know the extent of the site was 5 times larger than they suspected.

The authors emphasized that ground truthing lidar findings is key, and the latest study used multiple lines of evidence to rule out natural processes, including excavating ancient canals, chemical analysis, and radiocarbon dating of the soil.


Digging into the field at 23 sites, researchers uncovered layers of ash that were left after the Maya burnt the fields before planting. The scientists also tested the ratio of stable carbon isotopes 12C and 13C in the soil and found that the ratio rose during Maya farming. The ratio reflects the types of plants growing in the area, and higher values indicate maize and other species associated with human activities.

“We now are beginning to understand the full human imprint of the Anthropocene in tropical forests.”The authors claim that the results show a “widely distributed agroecosystem” for the Maya living in northwest Belize and suggest that so much farming could have led to an increase of carbon dioxide and methane in the early days of human civilization.


“We now are beginning to understand the full human imprint of the Anthropocene in tropical forests,” said Beach in a press release. “These large and complex wetland networks may have changed climate long before industrialization, and these may be the answer to the long-standing question of how a great rainforest civilization fed itself.”