Yes, it is worse than the flu: busting the coronavirus myths 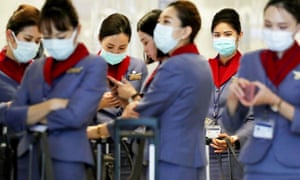 Our information is becoming more accurate.  Actual mortality is open to comment, mostly because it is likely that most will have a mild case and not report.   The mortality though is real.  This is dangerous.

The other problem is that we are in the midst of a containment effort which is likely to fail. In that case we will all be exposed during the next six weeks.  That will drive a problem of just too many victims needing real help.  A fraction will need breathing support.

Medical staff will be at risk and too much exposure is hardly helpful.

We have held it all off so far, but this cannot be counted on to remain so.

Ten percent of the NA population is 40,000,000 folks needing help if it fully spreads.  Obviously several million dead is a possibility..

So yes, we have plenty of reason to worry. It is all survivable if help is available.  that will be the problem.

I continue to be deeply concerned.  At least we are getting ample warning.

Yes, it is worse than the flu: busting the coronavirus myths


Claim: ‘It is no more dangerous than winter flu’

Many individuals who get coronavirus will experience nothing worse than seasonal flu symptoms, but the overall profile of the disease, including its mortality rate, looks more serious. At the start of an outbreak the apparent mortality rate can be an overestimate if a lot of mild cases are being missed. But this week, a WHO expert suggested that this has not been the case with Covid-19. Bruce Aylward, who led an international mission to China to learn about the virus and the country’s response, said the evidence did not suggest that we were only seeing the tip of the iceberg. If borne out by further testing, this could mean that current estimates of a roughly 1% fatality rate are accurate. This would make Covid-19 about 10 times more deadly than seasonal flu, which is estimated to kill between 290,000 and 650,000 people a year globally.

Claim: ‘It only kills the elderly, so younger people can relax’

Most people who are not elderly and do not have underlying health conditions will not become critically ill from Covid-19. But the illness still has a higher chance of leading to serious respiratory symptoms than seasonal flu and there are other at-risk groups – health workers, for instance, are more vulnerable because they are likely to have higher exposure to the virus. The actions that young, healthy people take, including reporting symptoms and following quarantine instructions, will have an important role in protecting the most vulnerable in society and in shaping the overall trajectory of the outbreak.

Wearing a face mask is not an iron clad guarantee that you won’t get sick – viruses can also transmit through the eyes and tiny viral particles, known as aerosols, can still penetrate masks. However, masks are effective at capturing droplets, which is the main transmission route of coronavirus, and some studies have estimated a roughly five-fold protection versus no barrier. If you are likely to be in close contact with someone infected, a mask cuts the chance of the disease being passed on. If you’re just walking around town and not in close contact with others, wearing a mask is unlikely to make any difference.
Claim: ‘You need to be with an infected person for 10 minutes’

For flu, some hospital guidelines define exposure as being within six feet of an infected person who sneezes or coughs for 10 minutes or longer. However, it is possible to be infected with shorter interactions or even by picking the virus up from contaminated surfaces, although this is thought to be a less common route of transmission.

Claim: ‘A vaccine could be ready within a few months’

Scientists were quick out of the gates in beginning development of a vaccine for the new coronavirus, helped by the early release of the genetic sequence by Chinese researchers. The development of a viable vaccine continues apace, with several teams now testing candidates in animal experiments. However, the incremental trials required before a commercial vaccine could be rolled out are still a lengthy undertaking – and an essential one to ensure that even rare side-effects are spotted. A commercially available vaccine within a year would be quick.

Claim: ‘If a pandemic is declared, there is nothing more we can do to stop the spread’

A pandemic is defined as worldwide spread of a new disease – but the exact threshold for declaring one is quite vague. In practice, the actions being taken would not change whether or not a pandemic is declared. Containment measures are not simply about eliminating the disease altogether. Delaying the onset of an outbreak or decreasing the peak is crucial in allowing health systems to cope with a sudden influx of patients.
Posted by arclein at 12:00 AM