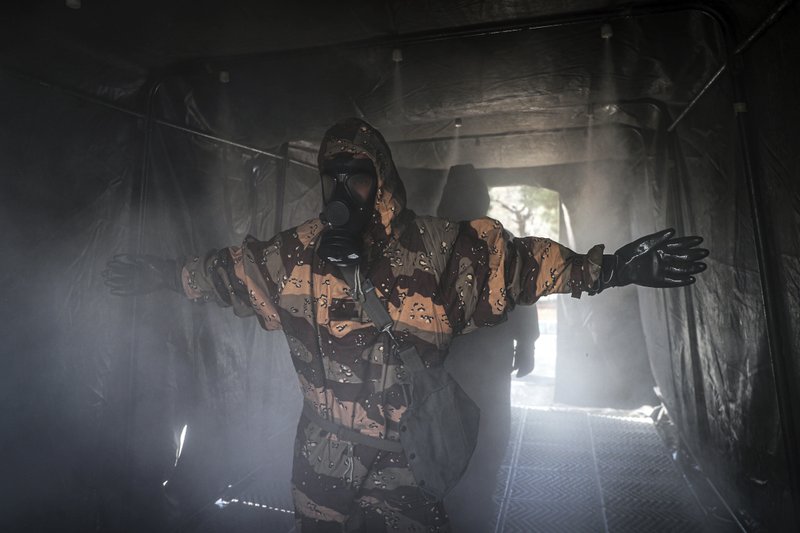 They have a long way to go to be forgiven for their past, but not so far to tackle the problem at hand.  They are also the internal boots on the ground.
The infection has obviously been spread at a high level.  That may simply be a fluke.  There is indication at least that it may well be more than that, but we will never know.
The present pattern is certainly suspicious..

In this Sunday, March 1, 2020, photo, an Iranian army member disinfects his protective gear against the new coronavirus in Tehran, Iran. Wearing gas masks and waterproof fatigues, members of Iran's Revolutionary Guard now spray down streets and hospitals with disinfectants as the Islamic Republic faces one of the world's worst outbreaks of the new coronavirus. (Mahmood Hosseini/Tasnim News Agency via AP)


DUBAI, United Arab Emirates (AP) — Wearing gas masks and waterproof fatigues, members of Iran’s Revolutionary Guard now spray down streets and hospitals with disinfectants as the Islamic Republic faces one of the world’s worst outbreaks of the new coronavirus.


Its commanders likely hope it also will wash away something else — the anger the public feels toward the powerful paramilitary force stained by its shooting down of a Ukrainian passenger jet in January. All 176 people on board — most of them Iranian citizens — were killed.


The push by the Guard comes as the new virus has infected and killed members of Iranian officialdom. Ensuring the survival of the government — as well as its own place in power — remains paramount amid one of the world’s deadliest virus outbreaks outside of China. Fear over the virus and the government’s waning credibility has become a major challenge to Iran’s leaders, who already are reeling under the weight of American sanctions.


“We have prepared all our health care facilities and specialized cadres that will expand this sacred jihad,” said Brig. Gen. Gholamreza Soleimani, who commands the Guard’s volunteer Basij force.


That the Guard is involved in the relief effort of a major catastrophe is not surprising in Iran. The Guard, whose forces include an estimated 125,000-plus troops and 600,000 mission-ready volunteers, routinely respond to the earthquakes that shake the country. Recent floods saw its troops mobilize as well.


Its forces, which include virologists, faced chemical weapons during Iran’s eight-year war against Iraq in the 1980s. It expanded into private industry after the war years to help the country rebuild. And the Guard, also known by the acronym IRGC, has conducted polio and other immunization drives in the past.


“The IRGC sees itself as the lead agency in any threat against the regime,” said Afshon Ostovar, an assistant professor at the Naval Postgraduate School in the United States who wrote book on the Guard. “Whether it’s protests, a state adversary or a virus, the IRGC will position itself publicly as Iran’s frontline defender.”


Today, the Guard controls broad parts of Iran’s economy, including its powerful construction company Khatam al-Anbiya. Exactly how much it controls is in dispute, with estimates ranging from below 10% to as much as 40%, but Iran’s government needs the Guard’s economic muscle in times of crisis, especially as it faces crushing sanctions from the U.S.


The Guard’s troops have moved into hard-hit cities like Tehran, Rasht and Qom. Using modular construction, they’ve quickly built hospitals and created a headquarters called the Coronavirus Fight Base, staffed with so-called “modern warfare units” who focus on responses to chemical, biological and cyberattacks.


Wearing gas masks and suits designed to protect during chemical weapons attacks, Guard members have been seen washing down areas to kill lingering traces of the virus that causes the COVID-19 illness. They’ve touted operations to target those hoarding desperately needed medical supplies.


“Their show of force regarding the coronavirus is as much political theater as a public health effort,” Ostovar said.


It comes as propaganda images created amid the outbreak have shown doctors and nurses in the foxhole with troops. That contrast also helps mock Iran’s civilian government, whose esteem among the public already is reeling since President Donald Trump’s decision to unilaterally withdraw the U.S. from Iran’s 2015 nuclear deal with world powers.


“Now, hospitals are Iran’s front line,” one volunteer at an Iranian hospital said her mother told her in a widely shared online video. “If you leave the front line, you’ll be deserter and I do not welcome a draft dodger in my home.”


That kind of spirit comes as a balm for Guard members, who have seen themselves widely criticized after shooting down Ukraine International Airlines Flight 752 on Jan. 8. That same day, the Guard had launched a ballistic missile attack on U.S. forces in Iraq. That attack came as a response to the U.S. drone strike in Baghdad killing Guard Gen. Qassem Soleimani, a top commander responsible for the force’s expeditionary operations across the wider Mideast.


Even before that, the Guard and security forces cracked down on protesters across the country in November, reportedly killing at least 300 people amid a nationwide internet blackout. Some bitterly note the irony of the Guard using the term “suppression” to describe their anti-virus operations in the wake of the crackdown.


“On COVID-19, it’s clear that there’s been a great deal of mismanagement and so the Guards are now trying to present themselves as the saviors,” said Ariane Tabatabai, an Iran analyst at the U.S.-based RAND Corp. “And of course, it doesn’t hurt to be able to change the conversation from the airliner episode — although, this will be a hard task to achieve given that both are examples of incompetence and mismanagement.”


The risks, however, are clear. If Iran doesn’t get a handle on the virus outbreak, it’s more than just the Guard’s reputation on the line. Already, top officials in Iran’s civilian government and its Shiite theocracy have contracted the virus, with several dying. Given that the virus is sweeping through the upper-echelons of power in Tehran and its front-line operation in hospitals, Guard members may too come down with COVID-19.


The Guard also has trafficked in baseless conspiracy theories amid the outbreak, with its leader Gen. Hossein Salami falsely suggesting the U.S. created the virus amid the wider tensions with America.


“We will win in the fight against the virus, which may be the product of the American biological invasion, which it first spread to China and then to Iran and the rest of the world,” Salami told a crowd in the Iranian city of Kerman. “The U.S. must know that if it did it, (the virus) will return to it.”


Still, the Guard’s power means it will remain front and center in any response to the virus crisis. The Guard only will grow more powerful if the outbreak remains severe into July, the global analysis firm the Eurasia Group said.


“A broader role is likely for the Revolutionary Guard in all aspects of the economic, political and public-health response,” it said in an analysis Thursday.
Posted by arclein at 12:00 AM