"The Market Is Broken" - Why Nobody Is Trading Any More 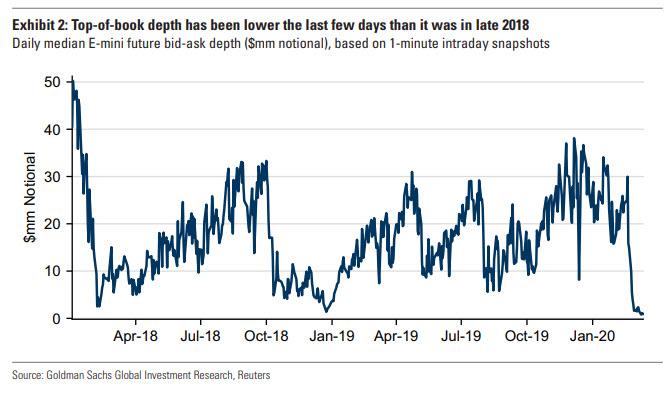 We have just seen a  liquidity blow out in the equity markets and all that.  Of course it is now impossible to trade.  Most everyone is attempting to clear obligations at the least if it happens to be possible.

Otherwise, this is tuesday and we may have found a bottom today and certainly signs of quelling going on.

Now we will find out just how much cash is already on the side lines..

"The Market Is Broken" - Why Nobody Is Trading Any More

On the first day of this week, which would soon mutate into the worst week for capital markets since the 2008 financial crisis, we warned that markets are about to go full tilt for the simple reason that "there is no liquidity", something we first highlighted at the start of the month when we pointed out "Two More Problems For The Bulls: Market Liquidity And Short Interest Are At All Time Lows."

Why our constant focus on liquidity? Because as Goldman explained on Thursday, "liquidity and volatility are interconnected, creating a self-reinforcing loop, and as a result liquidity conditions have been an important contributor to the velocity of recent S&P 500 moves." Yet while liquidity had dipped in the past on numerous stressed occasions, what we saw in recent days has been borderline biblical as top-of-book depth for SPX E-mini futures, typically the conventional metric of liquidity representing the dollar-amount of SPX E-mini futures available to trade electronically on the typically 25-cent wide market, has - as Goldman put it - "started to lose meaning as fewer and fewer market participants are quoting one-tick-wide markets for the futures at all."

The implication of this small number of contracts quoted was that very few market makers are quoting 25 cent wide markets at all. At the same time the frequency of E-mini futures showing wider-than-one tick markets has risen sharply; and according to Goldman's estimates, during Monday’s severe sell-off, E-mini futures had 50 cent wide markets more than 25% of the time, more than double the frequency seen on 24-Dec-2018. The key takeaway of diminished liquidity, however measured, is that individual trades can move markets more than they otherwise would have, leading to higher volatility. 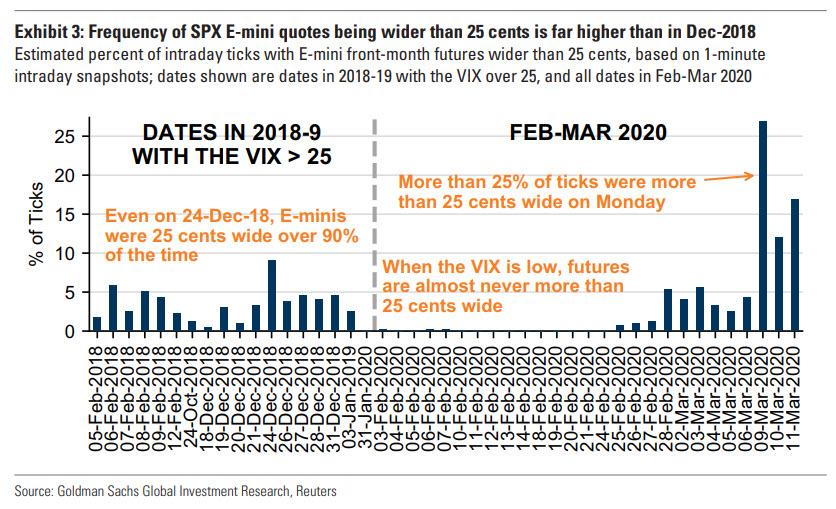 A key reason for the latest drop in liquidity has, curiously, been the concurrent drop in trading volumes: SPX future and option volumes were materially lower over the past week than they had been in the initial days of this market downturn (although they were still high relative to normal periods). 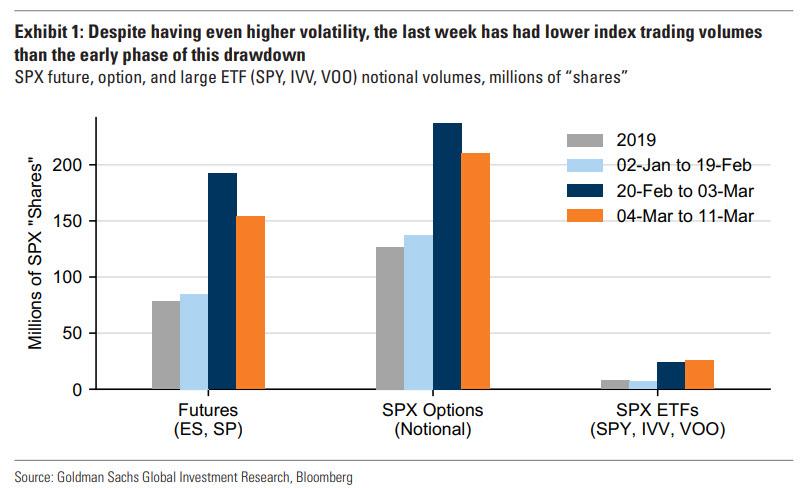 One surprising contributor to lighter-than-expected volumes over the past week has been slowing trading needs from the SPX option market, for two reasons:

1. Option volumes have slowed, particularly soon-to-expire options. As shown below, SPX option activity has been slower over the past week than it was earlier in the drawdown, resulting in less delta-hedging flow. 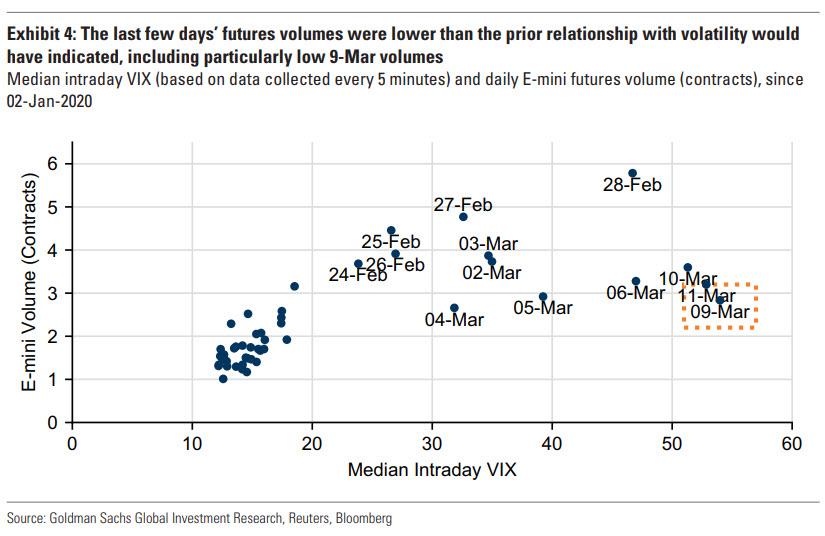 Activity in soon-to-expire SPX options with less than 24 hours to expiration has also trended downward over the past few days despite high volatility. Stated simply, Goldman sees the extreme level of option prices as a barrier to entry for many market participants. 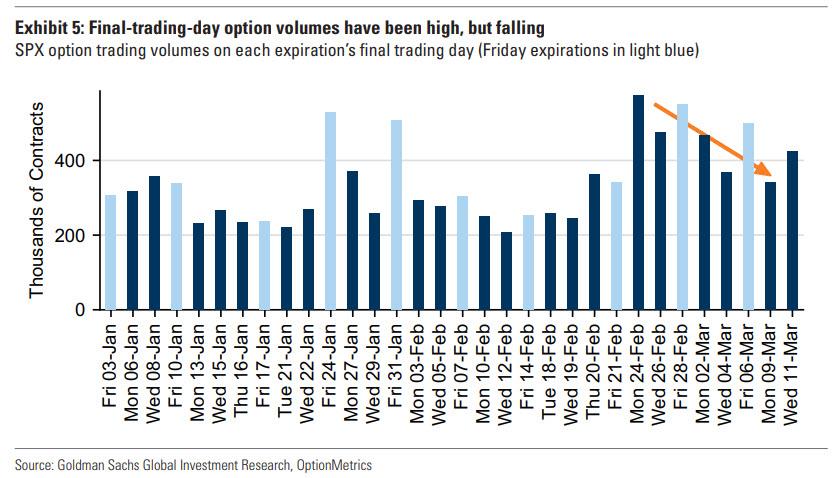 2. Most 20-Mar options have strikes much higher than current spot. Goldman goes on to note that many of its clients have mentioned the large activity in 20-Mar expiration SPX options, dating back to August, as a reason for concern about gamma impact. While the 20-Mar expiration is currently one of the largest-ever, by open interest, rivaling the always-large December expirations, most of its $1.7 trillion of open interest is at strikes well higher than the current SPX level, and was created in the last three months. 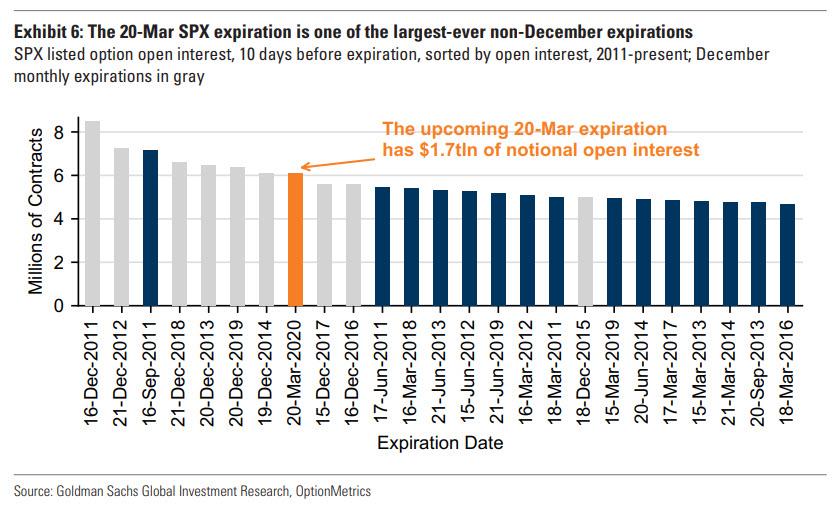 As a result, this expiration no longer has any relevant gamma profile at the current spot range. 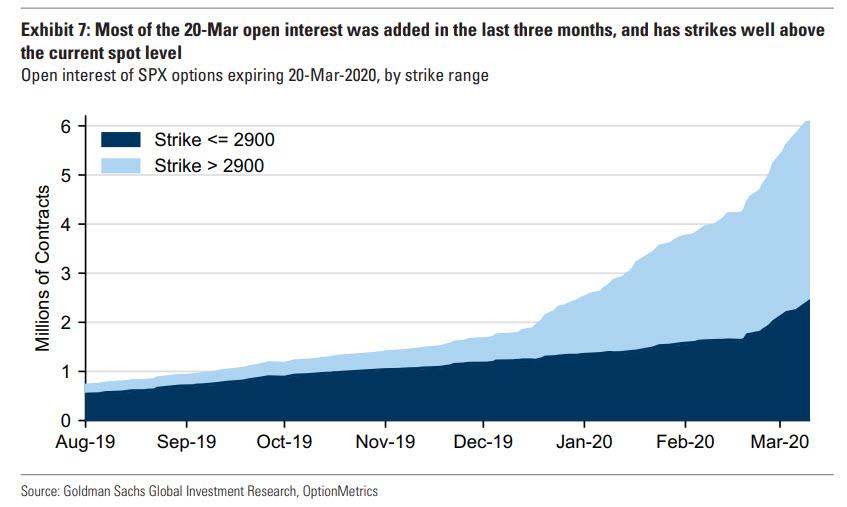 Yet while this may explain much of the collapsing equity market liquidity, an even more ominous development is the cratering liquidity across all asset classes, as we discussed on Monday, and which we attributed to the ongoing systemic shock that is rapidly draining dollar funding from the system and which the Fed, as of late Friday afternoon, has been unable to resolve despite trillions in repo and QE backstops announced over the past 48 hours. 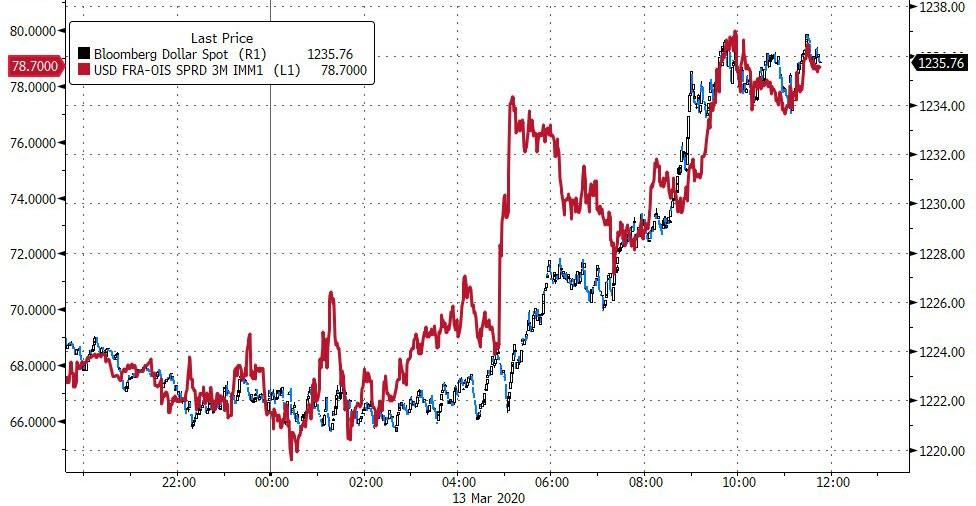 And so, after we first lamented the collapse in bond market liquidity at the start of the week, Bloomberg is there at the end of it, to confirm that not only has the situation not gotten better, it has in fact gotten worse, to wit: "The deepest bond market in the world is struggling with a lack of liquidity to a degree that veteran asset managers say they’ve never seen before."

The $17 trillion U.S. Treasury market is creaking as it feels the full force of trader panic over the coronavirus and its effect on the global economy. Thirty-year yields jumped as much as 35 basis points Friday before paring most of that increase. The Treasury’s longest maturity has moved in a double-digit range every day this week. Trading in off-the-run Treasuries, which are the older cousins of benchmark issues, has been particularly difficult.

And so, one day after we first reported that according to BofA the US Treasury market, the world's largest and most liquid, is no longer functioning properly.

Indeed, the staggering moves in the bond market itself have been the best indicator of just how illiquid it has become: on Monday, 30-year yields posted the biggest intraday decline since at least October 1998, followed by a bizarre last hour crash even as stocks continued to sell. And while a massive injection of cash from the Federal Reserve, President Donald Trump’s plan to declare a national emergency and hopes for fiscal support lifted stocks Friday, analysts and investors say the U.S. government-debt market is still not functioning properly.

"Liquidity is still atrocious," said Mark Holman, chief executive officer at TwentyFour Asset Management. Mark here laments something we said earlier: while some traders may have found trades in the insane rollercoaster market we observed in the past few days, they were unable to take put the trades on as there simply was not enough - or any - liquidity:

"We were just trying on Monday to trim a long position in the 30-year Treasury because it had moved so far in our favor, and were unable to get bids from several major dealers. We’ve never seen that before."

"I understand that dealers don’t have the risk appetite and budget they normally have," said Holman, who unlike most active "traders" today has in fact seen a bear market in his career which stretches back to 1989. "But I’ve never seen that before, the inability to trade a U.S. Treasury."

Meanwhile, confirming our Friday observations that liquidity is not only cataclysmic but getting worse, Goldman points out that a pair of block trades in Treasury futures printed well below market levels on Friday in a sign that conditions remain volatile. Traders also reported a shortage of prices on screens, while futures on U.S. ultra bonds hit circuit breakers repeatedly during Friday morning trading in Europe.

"“We heard there were some issues in off-the-run Treasuries,” Treasury Secretary Steven Mnuchin said on CNBC Friday morning. “We are working on that"... but apparently not enough, and the result was the biggest VaR shock of all time as risk parity funds launched a crushing deleveraging which has crippled conventional correlations, and left traders speechless at the bid or offerless Treasury markets. 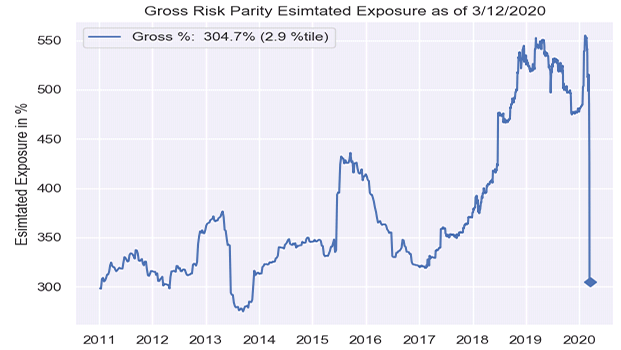 And as risk parity funds were caught in a liquidation cascade, both the equity and Treasury markets became unstable to the point of being untradeable. After starting the week off below 1%, 30-year yields soared to 1.79% amid the margin call liquidation rout, with bid-offer spreads surging to the highest level in years. 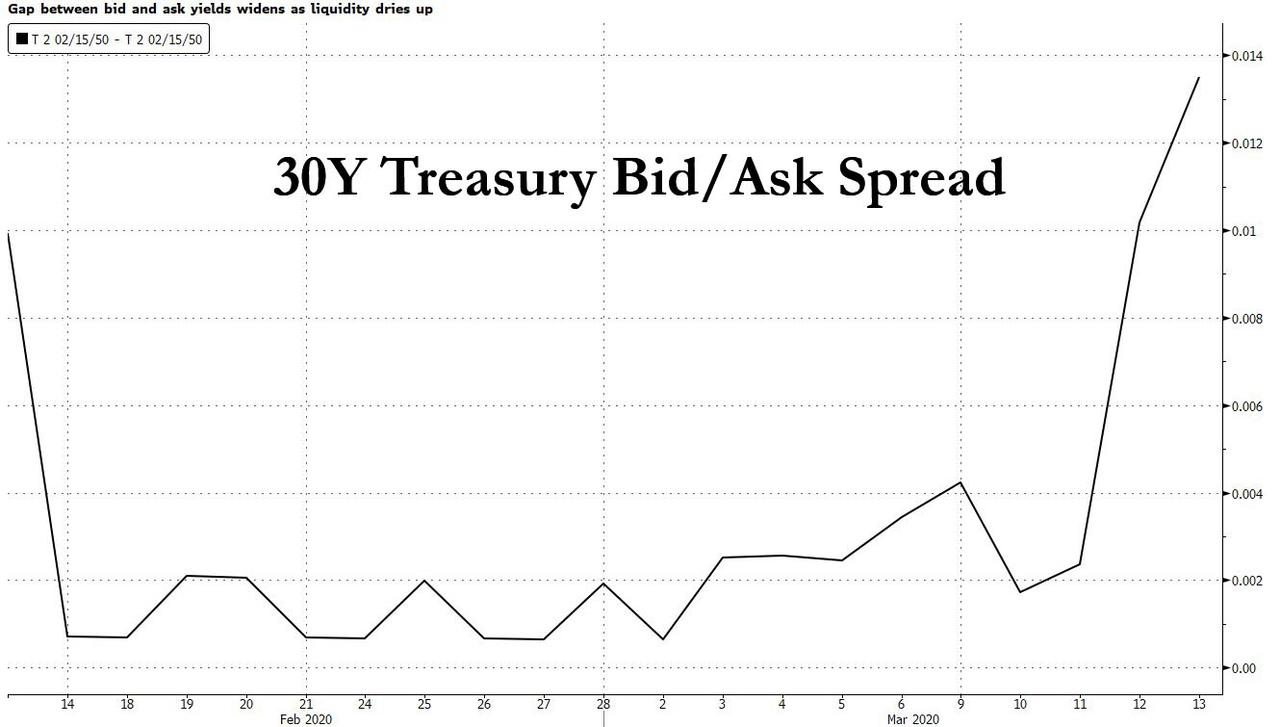 It wasn't just the US: German Bunds also saw yields surge after Germany finally caved and said the country would spend billions to cushion the economy.

The forced selling by certain funds meant that dealers were flying blind, and as a result many refused to make orderly markets, only adding to the market paralysis. "Very few dealers are willing to commit to firm prices on screens, said Zoeb Sachee, head of European government-bond trading at Citigroup Inc.

"There has been an abrupt deterioration in liquidity in the last week or so and it seems to get worse by the day."

Just as we warned two weeks ago.

Finally, adding insult to injury, volatility - both for stocks and bonds - continues to surge. The Bank of America Merrill Lynch MOVE Index, which measures price swings in Treasuries, and the VIX both jumped to the highest levels since the financial crisis. 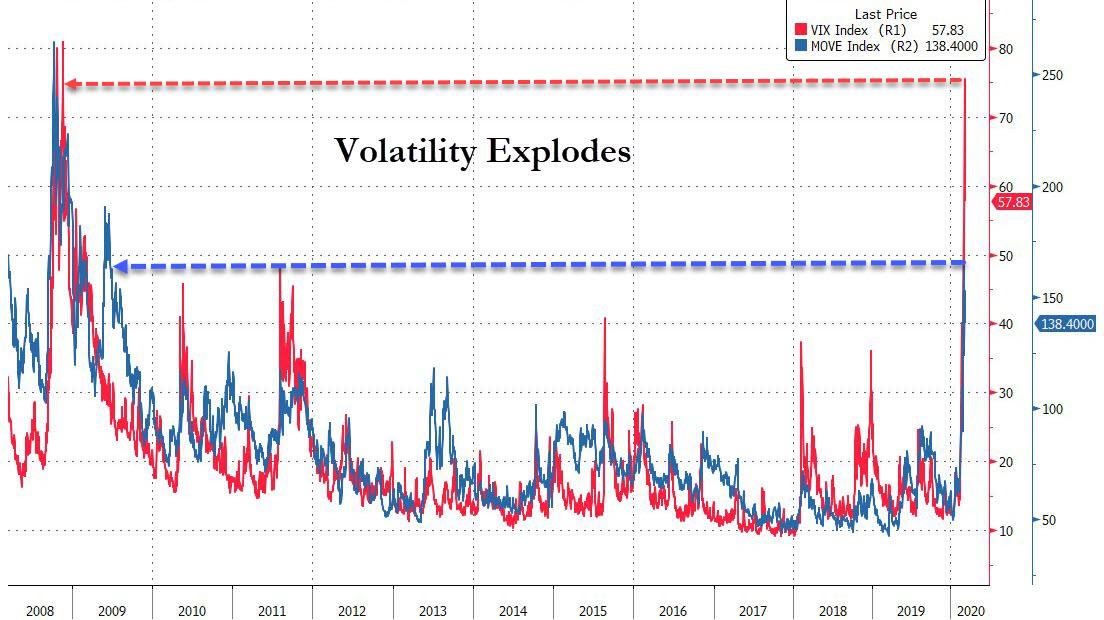 "We have seen such aggressive moves in the market that everyone is having to rebalance, address losses, or de-risk," Richard Kelly, head of global strategy at TD Bank, although he was clearly ignoring the shorts for whom the current market shock has been the gift they had all been waiting for for the past decade.

"We are at the stage where central banks need to provide exceptional liquidity into the market to make sure that basic markets can function."

But the real question is whether central banks can even do that: after a catastrophic ECB press conference which led to the biggest European market crash in history, and two days of unprecedented Fed interventions, stocks barely noticed, and it wasn't until Trump made some vague promises on Friday afternoon that risk finally found a bid. This backdrop means that Fed policy makers when they meet next week have to not only cut rates but take additional action to shore up liquidity in the financial system, said Alex Li, head of U.S. rates strategy at Credit Agricole. That could include a special liquidity program, such as efforts undertaken during the financial crisis, he said, echoing Credit Suisse's Zoltan Pozsar who now expects the Fed effectively launch every liquidity bailout operation possible, save for purchasing stocks outrght.

“The Fed just cutting rates again at this stage is really not the right medicine,” Li said."'The Treasury market is broken -- with it being very illiquid. There’s very wide spreads between on- and off-the-run spreads," and other signs of dislocation.

Let's just hope Jerome Powell, who first diagnosed the real problem with the US capital markets back in 2012, knows how to fix them.
Posted by arclein at 12:00 AM