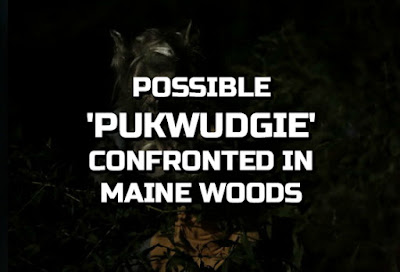 A solid black humanoid able to likely disappear as well.  It is not over large as well or we would have comment.

The fact is that upright humanoids whose stature is chuman or less will be invisible to us simply because the natural assumption of human will forclose speculation.
.

Creatures have been seen in clear daylight mking error impossible, sufficient to anticipate several populations out there.  Their spor would never help ius..

The witness encounters a small black entity in the dark Maine woods. Was this a Pukwudgie or another unknown being?

"Hello Lon, I read a post on Facebook and you were asking about stories of humanoids. Well I've got a story for you, a very true one at that! I was living in Fairfield, Maine on Cottage Street. Up the street from mine were some woods. I used to take my dog Morbid up there to burn some of that ACD energy off. Her most favorite time to go up in the woods was when we'd just gotten a good snowstorm.

Well, one time after a storm Morbid came and woke me up. She always did this after a storm. It was around 2 or 3am. So I got up and got dressed to take her up into the woods. My daughter had a friend staying with us and she happened to be up and came along with us. We got up there and were walking on the trail to get to the tree line. As we were walking towards the trees on both sides of the small trail is a swamp. I saw some moose prints that were really fresh so I asked Victoria to hold my dog's leash because I wanted to check out the prints. Well I took 3 steps on to the swamp ice and fell through waist deep. Vic was laughing hysterically as I was struggling to get out of the muck at the bottom of the swamp water! Anyways, I finally got myself out of it and continued on to the tree line.

Now once you get into the woods there a little side trail. I happened to see a gnarly looking tree down the little side trail that looked really cool with all that snow on it. I told Vic to stay there and is be right back. Well I took my dog Morbid with me and as we approached the gnarly tree my dog dead dogged me and I HATED THAT! So I turned to scold her when I saw that she was staring at this birch tree. Suddenly this thing stepped out from behind the tree and it looked towards us and I could feel it was just as surprised to see us as we were to see it. Now, it was completely black, had an oversized head, a swollen belly but it had no fingers or eyes. It was way too wide to fit behind that skinny little birch tree but it did. It was like it was communicating telepathically. Like when it turned towards us it had no eyes yet I KNEW that it was just as surprised as Morbid and I were. It was also like it was two dimensional or something, because it looked like a cardboard cutout or something. After it disappeared behind that tree suddenly the wind started to pick up and a snownado began to chase us back to the main trail. It stopped the second both of us had all of our feet on the main trail. I tested this 2 more times and each time I was chased back by a snownado. I immediately went home and drew what I saw step out from behind that tree as well as took pics of the tree it stepped out from. CC"
The first picture is of the side trail. The second is the drawing I made of 'it' when we got back home. The third picture is of the 3 trees. The middle tree, the small little one in the middle is the tree 'it' stepped out from behind and then stepped back behind it. 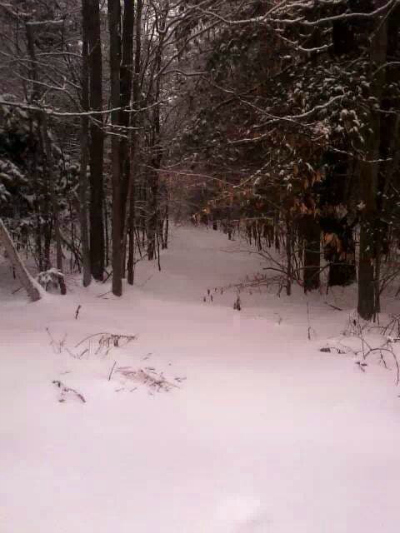 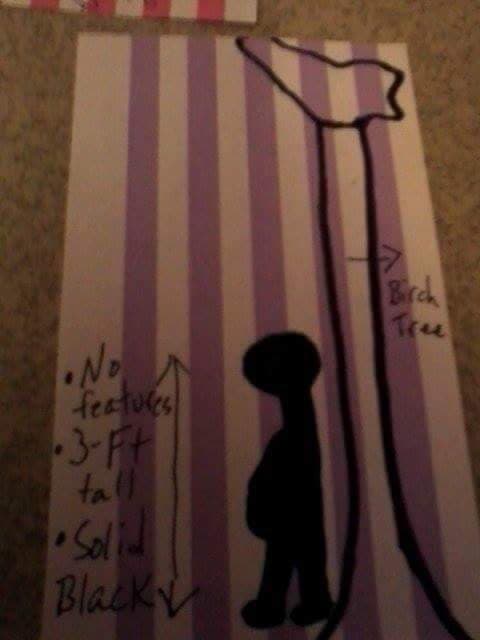 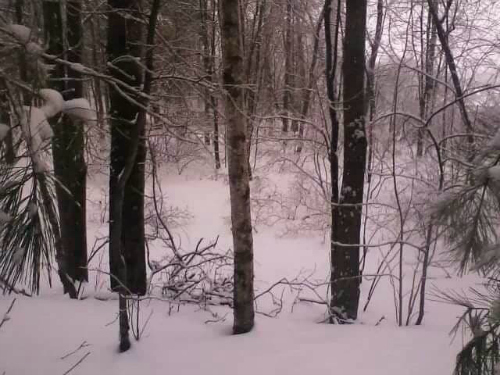 "I'm still freaked out by it. Still not sure what the hell my dog and I saw that night but it still haunts me to this day. Some folks suggested it was a pukwudgie, a hide-behind or worse an ALIEN! Some said pukwudgie because I was led away from my friend Victoria twice! One to walk on the swamp ice to check out those moose prints and then led away again to go take the pic of that gnarled tree. And because it seemed to use the weather as a weapon like chasing us off the side trail with snownadoes several times only to stop when we were on the main trail. I've had paranormal experiences since I was a child and I STILL don't know what I saw that night. Unfortunately Victoria moved back to Oklahoma and my dog Morbid died a day after her 7th bday from cancer. Not too long after that experience actually." CC
Posted by arclein at 12:00 AM