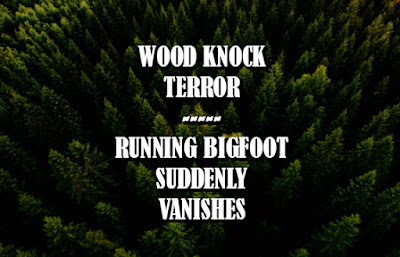 2 strange reports of possible encounters with a Bigfoot. One involves wood knocking, the other is a running hairy hominid that suddenly vanishes.  The first is actually a common occurance with Bigfoot.  In this case it actually made a point to signal its approach.  The observer failed to actually see the animal. experience tells me this was a Bigfoot though.

The second one is a hairy hominid and it is bot identified as a Bigfoot from this first impression.  That is likely because it was a Gaint Sloth.  We also already know that the Giant Sloth can make  the human observer  not see it.  This is now beautifully  demonstrated.


I also think that the  Big Foot is able to also make you not see it, but commonly does not, not least becasuse it is never stalking us unless it is looking to adopt a child.   There we have seen just this happen..

This happened a couple years ago during the late winter. I was way up in Vermont, close to the Canadian border at Smugglers Notch Ski Resort. Just for a tiny bit of background, I've been going up there twice a year - any time between January and March for about the last 5 or 6 years. The resort is pretty big for those who have never been.

Anyhow, this one time I'm there, I'm staying in one of the buildings that's far away from all the resort hoopla. When I first got there, first thing I did was check out the 'deck' (this is the one and only time I was on the ground floor) as I'm a smoker (bud and butts at the time) and wanted to see my view. I walk outside to see that the deck wasn't fully enclosed - there was a wide open space where you could just walk straight off the deck, right into the woods behind the building. Literally not even 10 steps from the edge of the deck to the tree line.

So, that night I go outside on the deck and I spark my bowl. It's around midnight. I'm smoking when all of a sudden, I hear what sounds like a single knock from the woods way off in the distance. I thought to myself "that was weird" but it was only one, and far away so I didn't think much of it. Then I heard it again, only now it was closer. The knocks keep happening, (one single knock each time) and keep getting closer and closer with every one. At some point, I get this overwhelming feeling that someone/thing is watching me, I can feel my chest tighten and I start to really panic. I wanted to run inside because I got so scared with how close some of the knocks had become, but I couldn't actually bring myself to do it. Eventually, the knocks sounded like they were moving away from me. I stayed out there until I couldn't hear them anymore. And then, finally my heart started returning back to beating normal.

That was the first night. I went out every night after, and never heard it again and never felt the fear I felt that first night. I have no idea what it was, but whatever it was, I felt like it either smelled me, or my smoke, and decided to come in for a closer look. And then once it saw me, moved off when I wasn't that entertaining. WW

At the time I was 12-14 and loved the woods and marshy area I lived in. That was until I was utterly confused at what I saw happen.

My house borders a old Indian/ historical reservation (no more Indians). My brother and I, being kids, loved to explore and imagine building forts and playing war in the woods. Stuff like that was always fun. While in the middle of moving large branches to build a makeshift fort, he and I are distracted by some movement about 40 feet away. He points and says 'look.' What I see is not what confuses me but how it plays out. I see a brown hairy figure roughly 8 feet tall moving pretty fast, though like casual jog. I was stuck in my tracks and I couldn't move. But as I watched it move away, suddenly it looped around a tree and just vanished! After that we ran over to the tree looking up and around. There was no area it could have possibly gone. To date family and friends doesn't believe me. Is this common or have other had the same experience? SL