At least he is not going to allow dithering.  He will have to order the economy back to work ASAP.   A lock down is not sustainable and never was.  It was necessary to jolt everyone into action.  It alaso educates us all on the art of social distancing as we all get the system back up to work.

Remember that Italy is still climbing and the whole medical system is now overwelmed which means that folks are dying because they cannot be treated.

We will reach that point in New York and LA in the next two weeks.

On the other hand we are all now aware.  Service industry workers do need to wear masks.  that will be good enough as it protects the server from fingers to face.  Customers do need to consume and can be more relaxed.

My point is that simple distancing will turn out to be a waste and it is not convincing that it accomplishes much when the numbers keep climbing.  .


Trump tweeted hours after New York went into lockdown, saying: 'the cure cannot be worse than the problem'


All non-essential businesses were shuttered across the state, leaving just grocery stores, pharmacies and other essential operations open


The disaster declaration will provide federal assistance for both emergency protective measures and crisis counseling in Washington, the White House said


Trump told reporters Sunday: 'The federal government will be funding 100% of the cost of deploying national guard units to carry out approved missions'


President Donald Trump has said the US will make a decision at the end of a 15-day period on 'which way we want to go' to fight coronavirus, implying that the country could re-open - just hours after New York City went into lockdown at 8pm on Sunday.


'We cannot let the cure be worse than the problem itself,' he said on Twitter.


Trump appeared to send mixed messages as he wrote the tweet after taking aggressive steps to stem the spread of the deadly virus.


New York City's streets were pictured deserted ahead of the shutdown after the order by Gov. Andrew Cuomo was made on Friday.


The president issued new guidelines on March 16 aimed at slowing the spread of the disease over 15 days.


Earlier on Sunday pledged to send the national guard into Washington, California and New York, as the hardest hit states were declared disaster zones.


The disaster declaration will provide federal assistance for both emergency protective measures and crisis counseling in Washington, the White House said.


Trump said Sunday: 'And through (Federal Emergency Management Agency), the federal government will be funding 100 per cent of the cost of deploying national guard units to carry out approved missions to stop the virus while those governors remain in command.


'We'll be following them and we hope they can do the job and I think they will. I spoke with all three of the governors today, just a little while ago and they're very happy with what we're going to be doing.'


He added: 'We're sort of a backup for states.'


In a statement Inslee said 'today's declaration does not unlock many forms of federal assistance we have requested to help workers and families who are badly hurting.


'We will continue working with our federal partners to deliver the full suite of disaster assistance that is sorely needed in our state, such as expanded unemployment benefits for workers who lose their paychecks as a result of the COVID-19 crisis.'


California gov. Gavin Newsom has earlier written to Trump asking that the state be declared a 'major disaster'.


He said: 'Unfortunately, California has been disproportionately impacted by COVID-19. 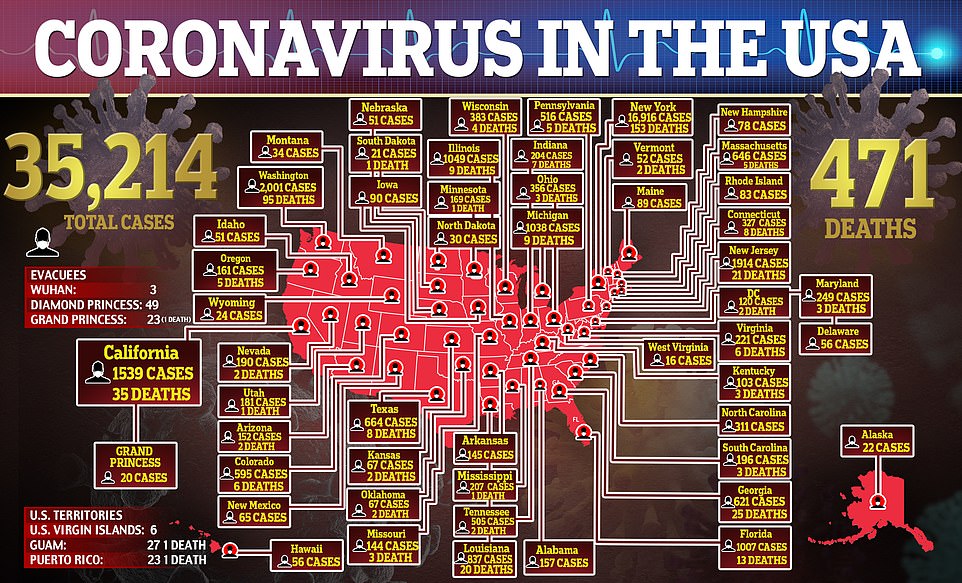 
On Sunday, New York passed Washington state, the initial epicenter of the U.S. outbreak, in the number of fatal cases.


New York Gov. Andrew Cuomo had said earlier: 'I think the federal government should order factories to manufacture masks, gowns, ventilators, the essential medical equipment that is going to make the difference between life and death.'


Cuomo has told hospitals to figure out ways to increase their current beds by at least 50% because predictions from health officials are that COVID-19 cases needing advanced medical care will top 100,000 in New York state in the next month or so. Such a deluge could overwhelm hospitals in a city that has about 53,000 beds.


Health care workers said they were being asked to reuse and ration disposable masks and gloves.

For most people, the coronavirus causes only mild or moderate symptoms, such as fever and cough.


For some, especially older adults and people with existing health problems, it can cause more severe illness, including pneumonia, or death. The vast majority of people recover.


Washington also announced that all state campgrounds would be closed until April 30.


Ohio and Louisiana have joined nine other states in ordering residents to stay at home to help curb the spread of the coronavirus.


The orders affect some 16 million residents across both states and exempt those who work in essential services such as healthcare and the food industry.


'The bottom line is we are in a race against time when it comes to this coronavirus and it's rapid spread in Louisiana,' Edwards said, as the number of cases in his state surpassed 830, including 20 deaths.


The Louisiana order will go into effect at 5pm Monday and continue at least until April 12.


In Ohio, where 351 cases have been reported and three people have died, the order will go into effect at midnight on Monday and remain at least until April 6.


'Every piece of evidence that I can lay my hands on indicates that we're at an absolutely crucial time in this war and what we do now will make all the difference in the world,' DeWine said.


DeWine said that the order does permit a few exceptions - but only for essential tasks.


'There is really nothing in that order, that we have not already been talking about,' the governor said.


'There's nothing in that order, that I have not been asking you to do for the last week or so.'


Ohio Department of Health Director Dr Amy Acton also spoke at the press conference and said the currently available testing data doesn't give a full picture of the state's coronavirus crisis as many cases have likely gone unreported.


She estimated that 60 percent of the Ohio population will contract the disease at some point.


'There is no time left,' Acton said.


'Listen to what Italy is telling us. Today is the day. We must do everything we can in our power to protect the people on the frontlines - the first responders and healthcare workers.'


In announcing the New Jersey measures on Saturday, Governor Phil Murphy said: 'My job is to make sure we get through this emergency so that you can safely gather with family and friends later.'


Murphy's announcement came after the state's top public health official said she believes 'we all' are going to eventually be infected by coronavirus.


'I'm definitely going to get it. We all are. I'm just waiting,' New Jersey Health Commissioner Judith Persichilli, 71, told a reporter for NJ.com in an interview published on Saturday.


Persichilli said she based her prediction on algorithms that predict the spread of the virus, and that she would most likely suffer a mild case that lasted a few days, as the majority who contract the virus do.


She added that she may not get the virus this month or this year, but that she fears it is coming for everyone.


The Garden State now has 890 confirmed cases and 11 deaths, making it one of several rapidly growing hotspots across the count


The strict lockdowns now have millions of Americans ordered to stay home, and mandated the closing of all non-essential business, decimating jobs.


An estimated three million Americans will file unemployment claims next week, marking the highest number of new jobless claims ever seen in US history.


Bars, restaurants, stores and casinos lie boarded up across the US as the nation's once heaving cities have turned into ghost towns after state-wide mandates have ordered one in five Americans to stay at home.


Fears are ramping up around how many Americans will find themselves on the breadline, struggling to survive and feed their families, as President Donald Trump warned that the pandemic is escalating to a level that he may throw the entire nation into lockdown for two weeks.

In the last 48 hours, eleven states issued the most extreme measures to date, ordering 100 percent of their non-essential workforces not to go to work.


The long-term implications are even more concerning, with escalating fears that the US is headed for a recession.


'Get out, get out while you can before they shutter the whole darn United States. A stunning reversal of fortune for the best economy in history to the worst economy in history in not even two months. The fastest recession in history. With no one spending a dime, it will stay that way a long, long time,' Chris Rupkey, chief financial economist for MUFG told The Hour.


'We are looking at something quite grave,' added economist Janet Yellen, the former Federal Reserve chair.


'If businesses suffer such serious losses and are forced to fire workers and have their firms go into bankruptcy, it may not be easy to pull out of that.'


This grave warnings fly in the face of Donald Trump's continued optimism over the crisis.


The president made the bold claim that the economy would be 'come back really fast' like a 'rocket ship' in a press conference on Thursday.


The Labor Department reported Thursday that applications for benefits, a good proxy for layoffs, had already surged by 70,000 to 281,000 claims last week.
Posted by arclein at 12:00 AM