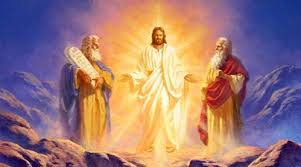 Let us talk about this. It was an eye witness account. Now also understand that the practice of meditation will allow the observation of the Inner Sun through the third eye.  Myself and other witnesses have confirmed this phenomena.  This is physically impossible.  Yet it is real.


Flooding your spirit body using the Inner Sun will power up one's personal spirit body to form a radiant body.  This is what is reported here.  Likely at full power he can dissolve away his corporal existence here or even recreate it.  We have again  reports saying as much in the case of angels materializing to assist folks in trouble.

I am impressed that Moses as spirit appeared and also Elijah.  We obviously need to pay much more attention to them and their utterances as both are meant to be central.

Again all this is physically real and physically possible once you understand that we are all Dark Matter Spirits operating third tier matter bodies as part of our maturation.

It is also obvious that accessing the Inner Sun will allow one to reach out and heal a sick person through powering up his spirit.  This explains the nature of the miracles of Jesus.  Mastering this may be why we are meditating and may well be its whole purpose.  It also clarifies the pantheon of Greek Gods as human beings who successfully engaged the inner sun. .

After six days Jesus took with him Peter, James and John the brother of James, and led them up a high mountain by themselves. 2 There he was transfigured before them. His face shone like the sun, and his clothes became as white as the light. 3 Just then there appeared before them Moses and Elijah, talking with Jesus.

4 Peter said to Jesus, “Lord, it is good for us to be here. If you wish, I will put up three shelters—one for you, one for Moses and one for Elijah.”

5 While he was still speaking, a bright cloud covered them, and a voice from the cloud said, “This is my Son, whom I love; with him I am well pleased. Listen to him!”

• 6 When the disciples heard this, they fell facedown to the ground, terrified. 7 But Jesus came and touched them. “Get up,” he said. “Don’t be afraid.” 8 When they looked up, they saw no one except Jesus. Matthew 17 1-9

“And then the sign of the Son of Man will appear in the sky, and then all the tribes of the earth will mourn, and they will see the SON OF MAN COMING ON THE CLOUDS OF THE SKY with power and great glory. Matthew 24:30

Editor’s Note: In one of the most important events in the Bible that is described eight times God or his messengers were in a flying vehicle 2000 years ago Moses and Elijah who had died were also brought to the mountain likely in the cloud…the word cloud means anything that flies except birds and insects. People cannot be lifted up in a cloud. So assuming the Bible is correct a flying vehicle likely a UFO brought God, Moses and Elijah to witness the transformation of Jesus who will also be coming in the clouds. His body took on a different appearance and Moses and Elijah who had died appeared. .Moses was the great lawgiver God’s great prophets in Israelite history, and Elijah was a great prophet too.

Then there was the heavenly voice speaking the same words that were heard at Jesus’ baptism (Matt. 3:17). The voice from heaven singled out Jesus as the new and sole source of authority.

First, it was a lesson for the disciples about who Jesus was. It showed Peter, James, and John that Jesus was no ordinary man nor even a great prophet, but that he was indeed no less than the Son of God, the Messiah of Israel. God was confirming the disciples’ confession. Second this scene demanded that men hear Jesus as one who had authority to speak to them and had been blessed and changed giving Jesus authority over men.