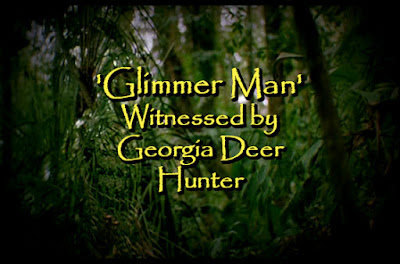 This is an excellent report. We now understand exactly how the Giant sloth is able to hide in plain view.  In fact this observer was able to drill down and follow the luminous blob as it moved away.  It is clear that his stand was right close by and when he did not go on, the creature then slowly left.

It is actually an astonishing phenomena because it is not camouflage.  i already knew that it could make itself part of a tree limb, but this is beyond even that.  Not moving means it disappears.  It is really quite incredible.


Again, movement conforms fully with the Giant Sloth.  We need to rethink our sensing tech and what we are doing in the forest.  A buddy system is critical as it is opportunistic and we do not stand a chance..

A Georgia deer hunter encounters, what is now referred to as, 'The Glimmer Man.' This phenomenon continues to be reported in a variety of situations, usually leaving the witness frightened and confused. What is it?

"This is a strange encounter I had years ago in Georgia. Mind you I’ve only told my brother and wife about this encounter and it took place 41 years ago! So here it is.

It was the fall of 1978, deer season in particular. I lived near a very small town called Suches, Georgia. It only has a population at that time of around 1,000 people. It’s in the southeast end of the Chattahoochee National Forest. I’m an avid hunter and I was hunting on public land in the National Forest just up the road from Suches in an area called Coopers Creek. I had scouted out the area during the summer, so late July early August. I knew where all of the game trails were, I knew where water was located which happens to be a small creek known as Bryant Creek. And I knew where all of the ridges and gaps were. I’ve hunted in and around this area for years and was very familiar with the area. Well when I finally located a good spot or at least a spot I thought would give me a good chance at a large buck, I set up my lock on tree stand in a tree about 12 feet off of the ground. I trimmed the branches to give me some shooting lanes and basically was all set for deer season. Oh, I was hunting with a 12 gauge shotgun. Rifle hunting is not allowed in the area.

So fast forward to early November. I had been hunting out of my tree stand about 6 times by the time this particular hunt happened. It was late afternoon, around 4:15pm. I wanted to get there earlier but work held me up. We had hired this new kid named Ryan and he was slowing me down all week. Anyway, this was a Friday, I finished up at work, jumped in my truck and headed out to my hunting spot. Now this was my normal routine for a Friday afternoon during deer season and my wife knew that I would not be home until around 8:30 pm and even later if I bagged something. I parked my truck at the trailhead and started hiking into the woods to find my treestand. The walk would take about 15-20 minutes. You want to walk pretty quickly but not run, you don’t want to make too much noise moving through the woods, you don’t want to spook any of the wildlife.

As I was walking to my stand the first thing I noticed was how quiet it was. I mean it was very quiet! I didn’t hear any of the normal chirping or singing birds, no insects, nothing and only a slight breeze. I thought it was a bit strange but continued on to my deer stand. I finally arrived and climbed up and settled in. Once I was comfortable, I jacked a round into the chamber, put the safety on my shotgun and began surveying the surroundings. Looking for anything out of place. Sometimes deer bed down during the day and you can spot their antlers above the tall grass and underbrush.

As I was doing this, I began to have this ominous feeling that someone was watching me. I don’t really know how to explain it, other than I had this deep feeling, deep within me, in my core, in my gut, something wasn’t right. Well, I tried to ignore it for a while, telling myself to stop being such a coward! There’s nothing out here but you, some deer hopefully, some squirrels, skunks and other little critters. As time passed the feeling only intensified, I kept looking at my watch wondering how much time I had left until dusk. “Should I leave early?” I thought to myself. “Of course not, a huge deer was probably only moments away.”

As I was sitting there arguing with myself, I caught movement to my right side in the trees. I slowly turned my head and began looking through the tree canopy and that’s when I saw IT! This is the part that still gives me chills, even writing this now freaks me out because I honestly don’t know what I saw! As I was staring into the trees I saw what looked like a large body builder but complete blurry moving through the trees. I could clearly see the outlive of the figure but the rest was blurry, Like I couldn't focus on it. It looked like a clear gelatinous blob but in the shape of a human, a large human. And whenever it would stop I completely lost sight of it. It blended into its background perfectly. I just watched it for what seemed like an eternity but in actuality it was more like 15 minutes. It moved through the trees effortlessly like a monkey or squirrel. It never really looked at me while I was watching it, maybe it was before and that’s why I got the feeling someone was watching me, I don’t know. It slowly moved off and I was scared about my walk back to my truck.

So, I waited for another 30 minutes, it was getting dark now and I slowly climbed out of my stand. Once I hit solid ground, I wasted no time. I sprinted all the way back to my truck. I jumped into the cab of my trusty Ford pickup truck and my lungs were on fire. That was the farthest and fastest I’ve run since basic training back in 1967! I just sat there in my truck and tried to regain my breath. I drove home and said nothing to my wife or anyone else for a few weeks.

As time passed I tried to convince myself that I imagined it all, that I dozed off in the stand and had some sort of dream. But I couldn't get the idea of that thing out of my head so I broke down and told my wife over dinner one night. She just listened and said it was probably my imagination. I later told my brother who said something similar, along the same lines. I never told anyone else and I never hunted in those same woods again. I never even went back for the tree stand. It was only like $300 and I didn’t want to go back there again, not for a measly $300 bucks. I took a break from hunting for about 10 years and then started up again but never in that area. I still wonder what I saw that day? I have no rational explanation.

Later in 1988 or so I saw the Arnold Schwarzenegger movie 'The Predator.' I couldn’t believe it, when I saw it. I jumped up and yelled at my wife “That’s what I saw”. That looks just like it! I don’t know if the writer had a similar experience as mine and that's what inspired him to make the predator cloak the way it did in the movie or perhaps he heard some other eyewitness account, but that’s almost exactly what I saw in the woods in northern Georgia in the fall of 1978. Mind you, not the reptilian looking beast with lasers, but the cloaked part. Like I stated previously, I thought I was alone until you did the episode on The Glimmer Man and now realize that others have seen it too. I don’t know if that makes me feel