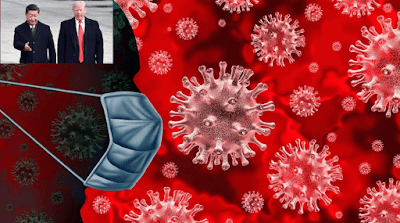 Why are we no longer hearing about vaping deaths?  what is happening there/  why does COV19 produces flooded lungs at all folks?  Or even vaping devices so suddenly after years of use already?

Something serious is going on and from all we know so far, our only friend is massive does of vitamin C and colloidal silver.  Or are we all been totally smoked?  There at least we have a secret motive.

Right now, provided the COV19 virus is a legitimate threat we have a narrative of causation that is pure spy versus spies and those vaping deaths folds into the overall foreign assault narrative if that is the ultimate plan of disclosure.

Remember that as of this moment in time the actual deaths  are not statistically significant when thrown in with flu deaths.  Thus asking if the narrative is true is an obvious step to take.

How real is the decline in China?

I have already gone over this here, but stuff slides off the page quick so in case you missed it


All the links were in the original report, and they were all MSM links, this DID HAPPEN.


In June/July, Ft Detrick Maryland got audited. It was determined that due to "procedural errors" viruses were escaping their biolevel 4 facility "through the sanitary system" and on August 4 they got shut down and remain shut down until today (and probably forever).


Now, one does not shut down ANY facility just because of "procedural errors, " no, those can be fixed quickly. When questioned about the closure, the excuse was then given that "the sanitary system was old and needed to be completely replaced". More patent bullsh*t. Take care of whatever and proceed as usual one would think, but not in this case


Reading through the meta talk, it is fairly easy to plausibly argue that the "procedural errors" were in fact by an unknown mole who smuggled coronavirus out of that facility, and released it in the United States first.


Then, in late August, we got our First vaping death which low and behold matched the symptoms of Coronavirus PERFECTLY. That was probably patient zero, and it was all scammed under the radar as E-cigarrette mayhem.


Even if there was no mole, and the viruses did indeed escape through a "dilapidated disposal system" run by a multiple trillion dollar military industrial complex in their most sensitive bio lab, the story still works - FIVE types of this virus got out one way or another and ALL OF THEM showed up together in the United States, while China has one strain, and other nations have some, but not all strains, with the U.S. being the only place to have ALL OF them. Obviously, the disease originated in the U.S.

The E-cigarrette took the rap.

And those who want America wiped out kept it all hidden. Due to population density differences, it spread a lot more slowly in the U.S. than it did when someone went to China for war games, (Gee, FT DETRICK tie in here) and likely was the source of what got started there, knowingly possibly, possibly not.


China is now stating the United States gave them the virus, and that the United States must therefore know who patient zero is. Due to subversion, the U.S. power structure is incapable of admitting it, but I'll place a solid bet: THE FIRST "VAPING" DEATH.


Consider this: Morgellons is obviously real, and the U.S. authorities do nothing but ridicule anyone who has it as having "delusional parasitosis" - these same people claim that E-cigarrettes (sic) can, while micro dosing "unknown crap" suddenly fill peoples lungs with five liters of gunk and ambush them in a single day. No hard and set warning signs, just a slowly progressing sickness (just like Coronavirus) and suddenly your lungs are plugged. How much would you really have to vape to do that, even if the materials were designed to deposit and plug your lungs? In those small amounts you'd at least get a few months warning something was amiss and that is not what happened . . . . . . it is obviously hokum . . . . . . Ft Detrick?
E-Cigarette symptoms, from NYT:


"Patients typically experienced coughing, chest pain or shortness of breath before their health deteriorated to the point that they needed to be hospitalized, according to the CDC. Other reported symptoms include nausea, vomiting, diarrhea, fatigue, fever and weight loss."

Question: Does that sound like "coronavirus" OR WHAT? How the * would an experienced vaper get nausea, fever and diarrhea from it? FEVER? Come on now, fever is triggered by a pathogen and diahhrea (sic) is quite questionable absent the same. And by the way, there's lots of "coronavirus" in people's poop, remember that?