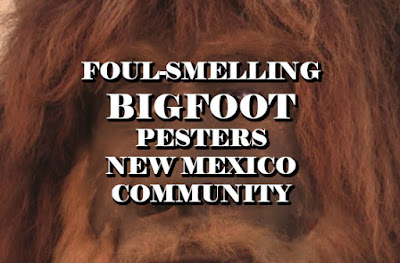 This is really interesting.  The creature has become habituated to a human community like a wild cat or dog. Notice the information we get regarding odor.  That last is possibly a giant sloth passing through as well.  Another Bigfoot would trigger a conflict.

There is nothing like a lot of eyeballs to settle questions.

The increasing number of sightings and hte vincrewase in human contact this implies that this creature is likely to move binto our managed niches.  This has already happened with raccoons and coyotes.

Now if we could find a way to bathe and even groom them.  They would likely resond well and communication may open up.

The following account came from a reader in south central New Mexico:

Something has been knocking on my door around 11:30 to about 2AM - maybe once in a week. Oh, I thought about your BEK posts, and give it enough credence not to go outside. I’ve had to start keeping the glass door locked because something kept opening it. The night before I started locking it, the door opened, and this huge hand covered my peep hole.

So, I started locking the door. The next morning I discovered where someone had urinated on the glass door. We clean the door. Something comes back and urinates on it, again. I’ve left it, this time. Whatever is doing it must stand at least 4.5 feet off ground - which is where it starts.

My neighbor and I have this same problem. We started comparing notes and we have a hairy person (Bigfoot we refer to as 'Harry') problem. He doesn’t come around much in the winter, which is interesting. Our Harry smells like a wet skunk, with just a whiff of dirty wet dog. We’ve learned that when Harry comes around, we pick up the skunk odor, which does not linger. When a skunk comes around, the odor lingers. Around last Easter something came around that was absolutely putrid. Evidently it was a different hairy person. This one had the classic stomach turning odor. It’s been around here, twice.

The knocking is annoying. The dogs lunge at it. There are evenings when it will knock twice, I swear, just for the pure entertainment value. My neighbor and I decided to experiment on the knocking. I was telling her about it. At the time, my front door was closed. I knocked on the glass. The little dogs, exhausted from barking all day Friday, ignored it. I knocked on the wooden frame and they started yapping, but there was no lunging. It was more like, a 'I-heard-your-knocking-now-quit.' I’m beginning to think he knocks, just to drive them crazy. If he were up to something truly frightening, it would be very simple to knock in a window and create disaster. He snoops around the windows, but never touches them. But, he knocks at the front door. If it were just me, I would say I’m losing my mind. He does the same thing to my neighbor. Like she said, it’s as though he’s trying to antagonize the little dogs, just for the heck of it.

I’ve been collecting things for a garage sale, and figured it would come around to look. On Friday morning, we put out my mother’s Christmas wreaths to sell. They had been wrapped in big garbage bags. That night, Harry came around, knocked on the door. He prowled around a little. My neighbor and I messaged back and forth. She smelled him, then I smelled him. He prowled around for a good hour. We even know where he might be hiding, which is freaky.

Yesterday morning, when I went out to put things back out for the garage sale, I went to put the wreaths up on a hanging basket bracket. One or two of them had traces of Harry odor. He had been snooping through the carport, touching a few things. If it had been skunked, everything would be noxious. The things he touched were well off the ground. There was his lingering odor on one or two things, and on the door to a closet. Because the items were in different locations it tells me he was snooping a little. He was touching several of the wreaths. You could trace the lingering odor on them, but only one or two, and not all of them. The odor was only on certain parts of the 2 wreaths and there were 24 wreaths!

Evidently he was feeling the texture of the artificial greenery, touching it. That absolutely amazes me. He felt it, to see if it was real, touching it. That reeks of intellect, and an ability to explore something new. My neighbor was excited about it. I was freaked. My 85-year-old mother thinks it is exciting. She told me it proved they were intelligent beings and not animals.

I thought I caught a glimpse of his shadow a couple of times when I would look outside the door. In other words, when something is new, in the carports, it looks around to check it out. Just like it’s part of the neighborhood. Like a nosy neighbor. I talked to a guy the other day, who was telling me he knows more people right around here who have the same experience. It’s like he just bops around the neighborhood, at night, looking at stuff.

He was telling me one of his co-workers, who lives near here, constantly sees one. Everyone in her family has seen it - and recently. S
Posted by arclein at 12:00 AM