Grizzly Bears Might Return to California. Is the State Ready? 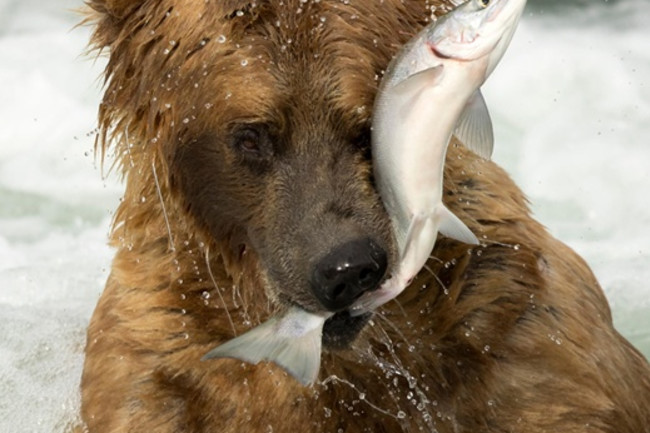 We are not yet technically ready for Grizzly bear husbandry.  However i do think that we will get there, even during most of our lifetimes.

It does demand husbandman mind control and planned game harvesting.  Of course we need to also restore a healthy biome as well but that is advancing also.

All things then become possible and even desirable.

We have the millions acre Great Bear Rain forest.  It is a bit uncomfortable to live too close there at times.
.

Grizzly Bears Might Return to California. Is the State Ready?

Researchers say grizzly bears could be reintroduced to the West Coast — if the region can bear it.

By Brent CraneMarch 11, 2019 5:00 PM
https://www.discovermagazine.com/planet-earth/grizzly-bears-might-return-to-california-is-the-state-ready?
A bear catches a meal in Alaska’s Katmai National Park and Preserve. Research is underway to see what grizzly bears might eat if they were reintroduced to California. (Credit: Nature Picture Library/Alamy Stock Photo)

Although the state flag suggests otherwise, nearly a century has passed since grizzlies roamed California.

The last resident bear, reportedly spotted in 1924, was also the last of its subspecies: Ursus arctos californicus. These California grizzlies had reached an estimated population of 10,000 before Europeans arrived and triggered their steady demise.

Peter Alagona, an associate professor of history and environmental studies at the University of California, Santa Barbara, is convinced that one day grizzlies can return to California. “Reintroduction is possible,” he says. “Absolutely possible.”

In 2016, Alagona formed the California Grizzly Research Network, a multidisciplinary initiative made up of more than two dozen academics ranging from geneticists to historians, to respond, in part, to the public’s growing interest in grizzlies. The group started by asking some practical questions that would need answers before any reintroduction: Where would the grizzlies come from? What would they eat? Where would they live? How might they affect the modern environment? How would they be received by locals?

Many of the answers lie in the past, in archival materials that mention the now-extinct California bears, as well as in paleontological clues uncovered in the field. By combining these details with modern-day conservation law and ethics, the scientists aim to paint a clearer picture of what a successful reintroduction would look like.

The Right Bear for the Job

All grizzlies are subspecies of the brown bear, Ursus arctos, which lives across the Northern Hemisphere. Not far from California, subspecies Ursus arctos horribilis, the mainland grizzly, is still hanging on, but mass urbanization, population growth and shrunken wilderness areas in the U.S. have restricted the bears — fewer than 1,700 live in the lower 48 states — to Montana’s Northern Continental Divide region and the Greater Yellowstone area
. 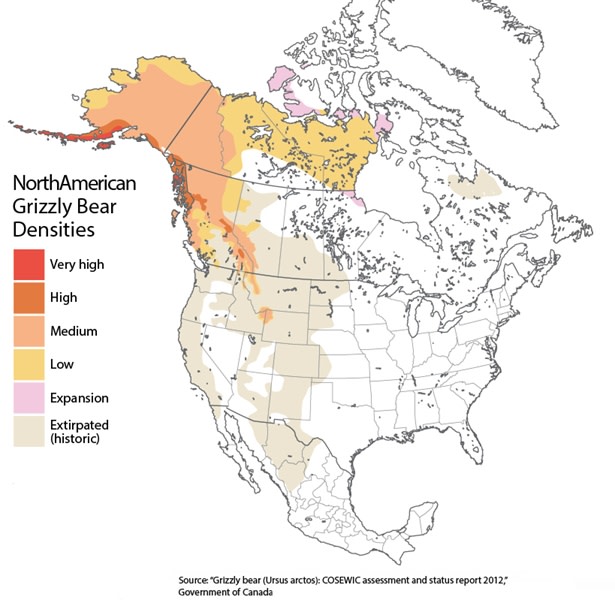 Grizzlies once flourished across North America. Some believe reintroducing the bear to more of its original range, if feasible, is the ethically and ecologically responsible thing to do because of their natural place in the American ecosystem. (Credit: Discover)
Although it’s possible these different populations once varied in their appearance, modern genetic work has suggested the extinct California and extant mainland bears might even be genetically equivalent. Beth Shapiro, a professor of ecology and evolutionary biology at the University of California, Santa Cruz, says brown bears in the continental U.S. share a common maternal ancestor that migrated south from Beringia before the peak of the last ice age.

Bears from Yellowstone and Glacier national parks might be used in a modern reintroduction, especially “if they continue to grow beyond the carrying capacities of the protected parks and wilderness areas in those regions,” says Alagona.

A good deal of scientific sleuthing is happening inside Sedgwick Reserve, a 9-square-mile conservation area in the Santa Ynez Valley northwest of Santa Barbara. On a sunny morning last spring, Alagona and two UCSB researchers gave me a tour.

The reserve is a picturesque expanse of shrubby hills and fields of wild oats cut through with gurgling creeks. Bevies of quail patrol dirt roads, while camera traps set up near water troughs capture images of deer, mountain lions, black bears and even rattlesnakes. The “chaparral bear,” the old nickname for California grizzlies, would have done just fine here, Alagona says.

While Americans tend to associate brown bears with temperate, coniferous forests, there are global populations in places as dry and barren as the Gobi Desert. “This is a very widely distributed, very diverse, very adaptive, very resilient kind of species,” says Alagona.

And they’re good eaters. Although Hollywood tends to focus on their teeth, grizzlies have prehensile lips that are perfect for stripping berries off branches, and their claws are ideal for digging up roots and turning over rocks to look for insects. They are opportunistic, and certainly not picky. “When you can eat anything, what do you eat?” asks Kevin Brown, one of the researchers. 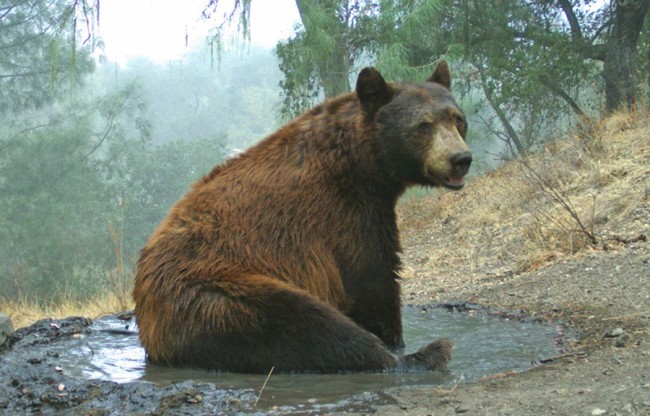 A resident American black bear claims a big puddle near a trail camera in the 9-square-mile Sedgwick Reserve. (Credit: Sedgwick Reserve)
Knowing the answer is crucial to predicting how grizzly bears might impact an ecosystem, and determining if their reintroduction is the right move ecologically. “If you put a significant number of large omnivores into the landscape, you’re going to see some changes,” says Alagona. Their presence, behavior and foraging habits could affect the behavior and foraging of a range of animals — from deer and elk to black bears and mountain lions — which could, in turn, affect the plants and other organisms lower on the food chain.

In biological circles, this ecological ripple effect is known as a trophic cascade. Alagona says it’s too early to hypothesize what cascading effects grizzlies may have on habitats in California, but they’re working on it.

Anecdotal evidence for what California grizzlies once ate has shown up in settler journals, archival newspaper articles and historical artwork. One 19th-century artist, for example, painted a scene based on notes taken during a 1602 expedition, showing a grizzly grazing on a beached whale carcass.

To gain a more precise understanding, though, scientists have started combing Sedgwick for potential grizzly foods, such as mushrooms, roots, acorns and berries. Back in the lab, they’ll analyze these edibles for chemical signatures called stable isotopes. Eventually, those will be compared with isotopes found in the bone fragments of California grizzlies stored in museum collections. This will allow researchers to pinpoint what grizzlies used to eat and what a reintroduced grizzly would likely munch on today.

Bears and Their Boundaries

While the team does consider climate change and warming environments in its possible reintroduction plans — less rainfall and drier air make fewer water resources, for example — they are more concerned with immediate threats like humans, says Alagona. “The real factor is whether people are willing to tolerate them,” he says. It was, after all, humans who removed grizzlies from California in the first place.

That’s where politics come in. Any potential reintroduction would need the sanction of both federal and state wildlife agencies. But funding for these projects is hard to come by, and not everyone is convinced that reintroduction is a priority. Jordan Traverso, a spokeswoman for the California Department of Fish and Wildlife, says that while the agency “is absolutely not anti-study,” it is “already inundated with human-wildlife interactions with the [animal] species that are here. ... We have no reason to assume that grizzlies would stay within some arbitrary boundary we set in a remote area of the Sierra.”

The mood of the general public around reintroduction is less clear. In a statewide survey of 1,000 people by the research network, California residents didn’t have strong feelings, says Alagona. A quarter of the respondents were not even aware that California grizzlies were gone. Meanwhile, a recent petition drive by the Center for Biological Diversity, an environmental advocacy organization, collected 20,000 signatures in support of reintroduction.

For doubters, it might help to look at the statistics. California may have 39.5 million people, but the vast majority of them live in cities along the coasts. Nearly 70 percent of people in California live in coastal counties. Furthermore, almost 90 percent of Californians reside in urban areas, with roughly a sixth in San Diego, Los Angeles or San Jose — less than 1 percent of the state’s total land. The state also boasts more wilderness — continuous tracts of undeveloped forest land — than any state except Alaska. This means more space for grizzlies.

Alagona stresses that the research network is in it for the long haul. “We are doing some of the hard work now, I think, to set the stage for what may eventually become a really different kind of conversation around this,” he says. And while he knows that any discussion of reintroduction “seems a little crazy at first,” that is precisely what draws him to it.

“One of the problems with conservation is that it often fails to provide a visionary or positive vision for the future,” he says. “Reintroduction is not essential, but it’s also not impossible — it’s a choice that we can make as a society.”
Posted by arclein at 12:00 AM