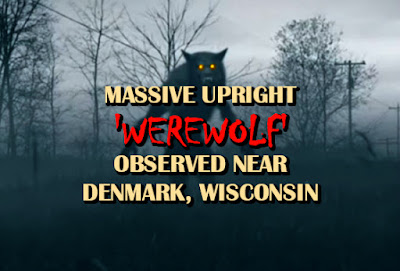 These reports are now coming in thick and fast.  Witnessess are coming forward becayse a google search will find these sites.

We do get variations in presentation.  However all such species has significant variation based on sex.  This one seems to have had a dominant shoulder mane which suggests a male. Most are likely female.

The tail remains controversal as well.  And then we are also going to have a range of sorts anyway insluding much smaller ones that we will naturally mistake for something we know.
.

An eyewitness recalls his sighting of a massive werewolf-like cryptid when he was a boy in 2005. It occurred in the fields and woodlands near Denmark, Wisconsin

I'd like to share an encounter I had in 2005. I was 12 years old at the time and it happened on my grandparents property, out in the country near Denmark, which is southeast of Green Bay, Wisconsin. The area has a lot of farmland, with patches of woods.

My grandparents own a few acres of land, and on the far right corner of their yard there's a thick patch of woods and swamp that goes on for a bit before hitting another farm field. I was standing on the back deck, shooting cans with my BB gun. It was a hot and muggy morning in July, and all morning I just had a really eerie feeling that I couldn't shake. It was like I was being watched but every time I'd look around the yard I never saw anything.

I just kept going back to shooting cans when I felt the feeling again. I started scanning the treeline of the woods this time and that's when I saw it. It was standing next to a tree, and it was absolutely massive. When I got older I went back to that tree and tried to get an estimate on the height. I'd say it was 7 to 7 and a half feet tall. The only way I can compare the body is to that of Arnold Schwarzenegger's! it's unreal how big its shoulders, arms and chest were. It was covered in grey fur, that was really shaggy and thick on its shoulders and down part of its body.

I know when people describe dogman, you hear a lot of. "It looked like a timberwolf standing on two legs." or "It had the head of a German Shepherd." This was not like that at all. The head and face looked like a werewolf. It had pointed ears on top of its head, its eyes were yellow and almost seemed to glow even in the daylight. It was snarling with its lips open and it almost seemed to be smiling. The look and smile on this thing's face was pure evil. Sinister is the only way I can describe it. I don't recall if it had a tail or not. I feel like the legs looked like that of a human's and not bent like a dogs. However I was mostly looking at the head/body.

After what had to be only about 10 seconds (it seemed longer), without warning it broke eye contact with me, and took off sprinting to its right. It went through some really thick brush, emerged farther down the treeline, and took off into the woods. The thing is, no person could clear what it cleared in the time that it did. It was seconds that it ran probably a good 50-60 yards, and it was all thick brush through there.

Being absolutely terrified, I went back in the house and didn't go outside the rest of the day. My aunt came up to me later and said, "I heard some strange things outside last night. I've been meaning to tell you but I didn't want to freak you out." I didn't tell her what I saw thinking she'd think I was crazy or making it up, but I insisted she tell me. She said she heard a loud growling and snarling walking around the house the previous night, unlike anything she's ever heard before.

I still visit my grandparents quite often and haven't seen anything since. I haven't heard of any other reports from the area, but I know there was a Bigfoot seen crossing the road nearby in the 60's or 70's. ST