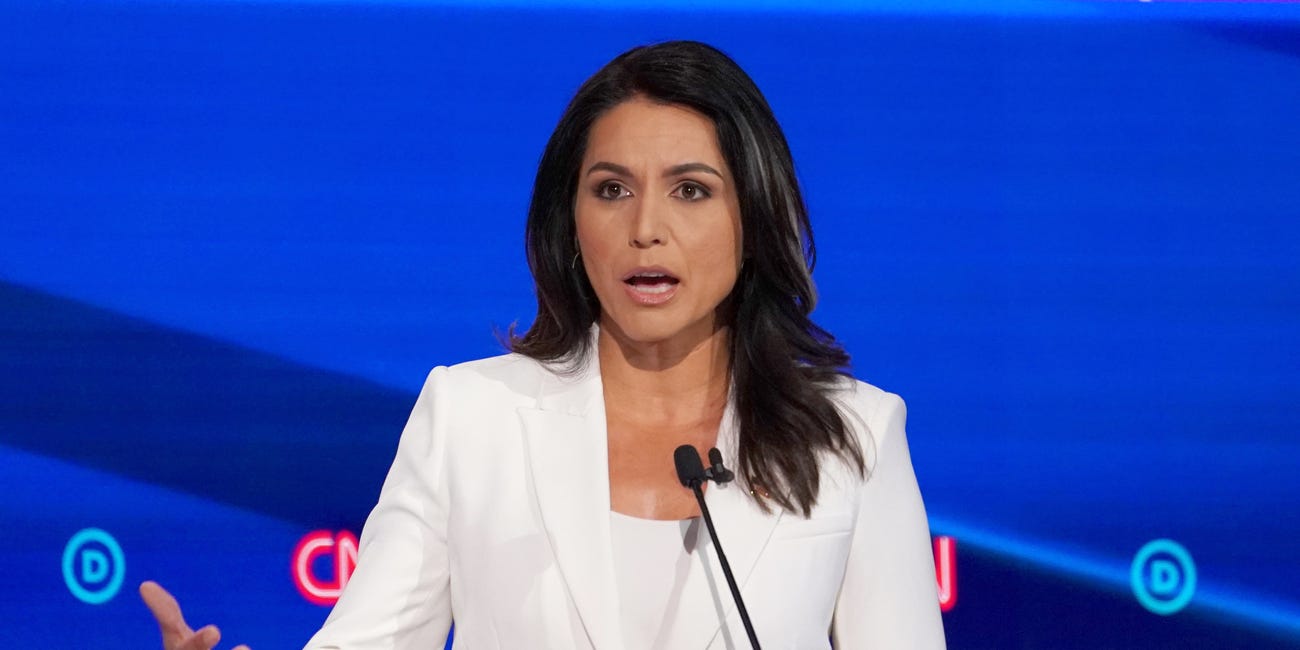 Really.  she has a political stage and she is establishing that she clearly thinks for herself.  Winning is not the game today.

Understand that everyone who voted for the fraudulent DEM impeachment effort is going to be written out of history and those careers will be forever blemished.  At the same time she is very much adopting the new Global Nationalism of our time.  This is exactly where the surviving DEM party must be after Trump in order to recover any political traction.

The socialist toxin presently apparent will be utterly expunged by then as well.  If lucky, it will form a third party rump after been turfed from the party. The present dispensation is going to be trampled and she is positioning to lead the way forward.  Or she could become a Republican easy enough as well.  She is one of the few with that particular option..
.

Rep. Tulsi Gabbard has been a long-shot candidate for the 2020 Democratic nomination since she launched her campaign.

Several top-tier candidates have dropped out in the past few days, but Gabbard has shown no signs of following their lead. It's unclear why.

Gabbard has consistently been at the bottom of the polls and earned only two delegates toward the Democratic nomination.

She has spent much of the election cycle on Fox News criticizing the party she's running to lead.

Rep. Tulsi Gabbard has spent much of the 2020 election cycle on Fox News bashing the Democratic party and, in some cases, defending President Donald Trump as she runs for the Democratic nomination for president.

She has consistently been at the bottom of the polls, failed to qualify for a number of debates, and won only two pledged delegates (by coming in second place in American Samoa), putting her far behind the two candidates now at the center of the race: Sen. Bernie Sanders and former Vice President Joe Biden.

A candidate needs 1,991 delegates to win the Democratic nomination outright, and the odds are not in Gabbard's favor. 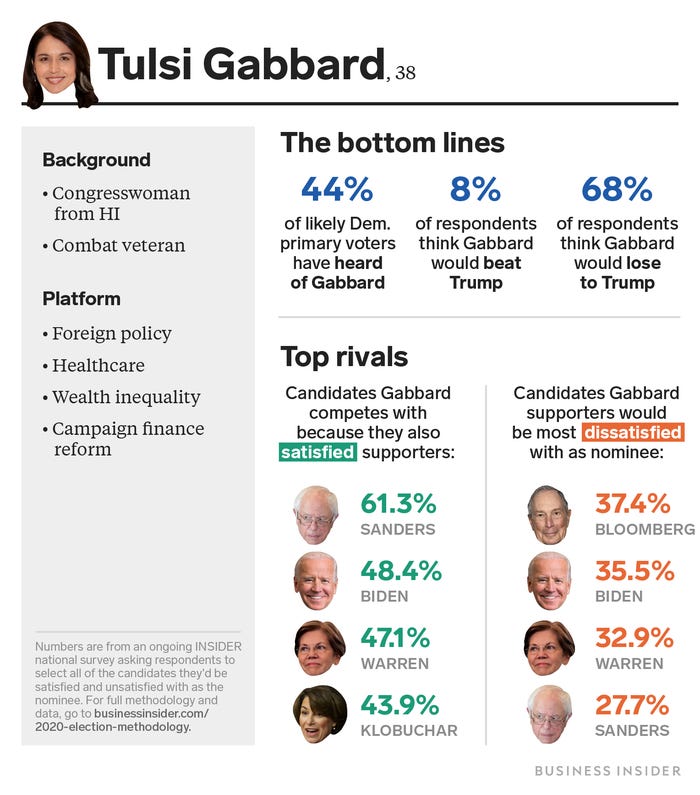 Gabbard is about as likely to win the Democratic nomination as Barack Obama is to run for a third term for the presidency, and it's unclear why she has not yet dropped out.

If Gabbard is using her presidential campaign to audition for a role at Fox News, which some in the media have speculated, she seems to be in a fairly good position.

But if she's staying in the race in hopes of winning the nomination, it's a lost cause. 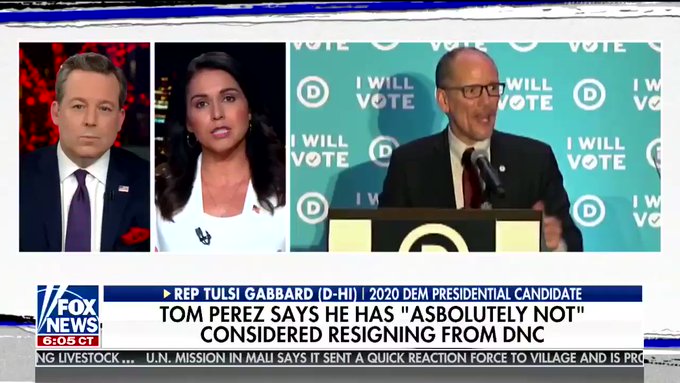 The Hawaii lawmaker's campaign did not immediately respond to a request for comment from Insider as to whether she believes there's still a chance she could go on to win the nomination.

Sens. Elizabeth Warren and Amy Klobuchar, former South Bend, Indiana, Mayor Pete Buttigieg, and former New York City Mayor Mike Bloomberg all dropped out in the past week. Each candidate had won more delegates than Gabbard (and Buttigieg won Iowa), but they knew the math was not in their favor moving forward. Gabbard has apparently not reached the same conclusion.

But this is a fairly characteristic move for Gabbard, who has a history of taking perplexing positions that garner attention but have no palpable consequences.

Gabbard sparked outrage, for example, after she voted "present" in December on the two articles of impeachment against President Donald Trump.

The vast majority of Democrats voted in favor of the articles, making Trump the third president in US history to be impeached. Gabbard decried the process as too politically motivated.

"My 'present' vote was an active protest against the zero-sum game the two opposing political sides have trapped America in," she tweeted. "My vote and campaign is about freeing our country from this damaging mindset so we can work side-by-side to usher in a bright future for all"

Gabbard's career has been typified by actions that are controversial enough to make her a momentary storyline but ultimately inconsequential.

This was also true after she visited Syrian President Bashar Assad in 2017.

The visit with the leader, who is accused of war crimes, was under nebulous circumstances, and she has since been widely accused of being an Assad apologist as she echoes many of his conspiratorial talking points about a supposed US-led regime-change war in Syria. Gabbard has consistently downplayed the atrocities Assad is accused of and refused to call him a war criminal as she refers to US-backed groups as terrorists.

She has defended the visit by saying that the US has to be willing to engage in dialogue with adversaries to resolve conflicts. About three years after her visit, Assad's forces and Russia are engaged in a devastating offensive in Idlib, Syria, that's creating what the UN has described as a "horrifying" humanitarian crisis.

Beyond the controversial Assad visit, Gabbard has also faced criticism over her ties to far-right Hindu nationalism, particularly as the world looks on in horror at deadly Islamophobic violence in India as Prime Minister Narendra Modi pushes for a divisive citizenship law that excludes Muslims. Gabbard has been a vocal supporter of Modi, despite his inherently discriminatory policies and views.

Perhaps the most attention Gabbard has received in this election cycle came via a spat with Hillary Clinton in fall, in which the former secretary of state described the Hawaii Democrat as a "favorite of the Russians." Clinton also suggested that Republicans were "grooming" Gabbard to be a third-party candidate.

Gabbard responded by calling the 2016 Democratic presidential nominee the "queen of warmongers, embodiment of corruption, and personification of the rot that has sickened the Democratic Party for so long."

This war of words raised Gabbard's profile but did not make her more popular, Insider polling from that time showed.

When you have to rely on controversy to propel your campaign, chances are that you're fighting a losing battle.
Posted by arclein at 12:00 AM