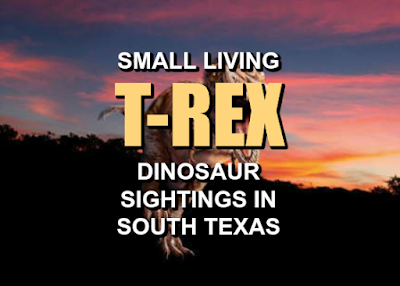 Once again they hunt at night and know to avoid us.  This area is actually an excellent region to anticipate survivors from the impact that knocked them out.   Size would matter of course and the ability to hunt birds in particular.

We also know that there are credible reports from the area of the former Suhul which mostly went underwater only 12,000 years ago.  This is northern Australia and Papua New Guinea.  Throw in the continued existence of Pterosaurs as well.

What should be obvious is that survivors did occur but that successor species stopped them from a serious recovery. Recall how the rat has produced a global extinction of many bird species unable to protect their eggs.


This creature may still depend on bog nests to secure their eggs along with the crocodiles.  At least they function at high speed and likely avoid the full sun.  Looks like we have a key hot spot here.

Small T-Rex cryptids have been reported in south Texas in the past. These particular accounts, each forwarded by the witnesses to me, best describe the phenomenon. What do you think is going on?


https://www.phantomsandmonsters.com/2020/02/small-living-t-rex-dinosaur-sightings.html
A few weeks ago on Arcane Radio, Ken Gerhard and I were discussing the 'small T-Rex' phenomenon reported in south Texas. I received several requests to repost these accounts:

Hello Lon - A couple of months ago in summer, my friend actually saw a small dinosaur here in town, on a main street! It was evening when she saw it, probably around 8:45 pm. She was driving and noticed the dinosaur cross the street! She saw the shape clearly as it passed another cars headlights on the opposite side. She said oddly that the other car didn't seem to notice as the creature passed. She tried to call me but her phone was out of minutes.

Just a couple months before I had actually heard a creature I could only describe as a dinosaur. I had been asleep, it was night, maybe around 1 or 2 am. I had awoken and just at that moment I heard an unfamiliar screech of something running by my window. We have an AC unit in the window so the window is basically open. I heard its footsteps as it ran by and it was heavy whatever it was. I could hear it clearly on the ground. As it ran further away I could hear it screech again! It was like nothing I've ever heard in my life! It was loud too and I wonder if anyone else heard it or saw it. I live in an apartment complex. I just laid there in bed completely bewildered by what I had just heard. I questioned my sanity and if I had heard what I thought I heard. So when my friend saw the "dinosaur" she was excited and wanted to tell me because of what I heard. I'm only sad I didn't get to see it too. We both questioned our sanity. These stories you posted help me feel better and not so crazy. MR - Hebbronville, Texas


NOTE: I called the witness to verify her account. Lon

Hello - I noticed your article about small dinosaurs in Hebbronville, Texas. This witness was not exaggerating because I have seen an unknown animal in a field here in Hebbronville.

It was April 2011 and I was walking along W. David St. to my friend's house on Randada Rd. at about 5:45 PM. I had just gotten off work. On the side of the road where I was walking, I saw dust being kicked up into the air and moving along the field. Then the trail of dust was heading toward the road in front of me. I stopped walking not knowing what may be exiting at the road.

About 40 ft. in front of me was what I can only describe as a little T-Rex dinosaur, about 2-2 1/2 ft in height. It didn't stop running as it dashed across the road into a smaller field. It was light reddish brown, stood on two legs and had a long tail that was straight out as it ran. There is no way that this was a lizard known to live here. It looked very much like the photo of the toy I found online.

No one wanted to believe me. My friends and family think I mistook it for another lizard, but I know what I saw.

Until I read your article, I thought I may be going crazy. I do believe there are very strange creatures around here. My ex-husband used to talk about huge birds and walking shadows that he and others would see on a ranch south of Hebbronville. At one point several cattle would go missing without a trace. He would never stay there at night.

Thank you for reading. You can contact me. MG

Hello Sir - this morning I was told by my neighbor that you had received reports of small T-Rex dinosaurs seen in Hebbronville, TX. and you mentioned it on a radio show. I live near Falfurrias, TX which is about 18 miles east of Hebbronville. I and others have seen those creatures. My neighbor and I saw a pair in December 2012 on the roadway behind our houses. We were scared to report our sighting. I know other people in this area have seen the same creatures.

A family member from Sabinas Hidalgo in Mexico told me that he saw a 'big lizard' the last time he visited us. He saw it while he was driving near McAllen, TX. He described the same thing we have seen. It was 2-3 ft. tall with a large head and long tail. It ran on 2 legs and was very dark in color. The two creatures we saw were dark brown and walking quickly on 2 legs also. It was about 4:30 pm and we watched them for about 20 seconds as they moved towards the dead end of the road. We got a very good look. For a few nights after that, we heard short shrills coming from the brush at the end of the road.

A couple of weeks later, my son told me that he and his friends found many quail feathers and deer bones scattered by a tree in the same brush. I did contact a wildlife authority about the remains but didn't mention what we had seen. He said that it was probably coyotes, though I have not heard or seen coyotes for long time. Another neighbor lost a dog about the same time. Again coyotes were said to be the predator. No remains were ever found. My husband was alarmed and had a high heavy duty steel link fence built around the yard so that our grandchildren and pets are safe.

My neighbor said that she thought these may be Chupacabras, which I did not believe in. I don't know now what to think now. Do you think these are real dinosaurs or maybe a Chupacabras? Our dog (Rottweiler) has been acting strange lately. He acts calm and fearless sometimes, but hides and whines other times. This always happens at night. I think these creatures are around again. LM

NOTE: I was able to talk to the witness by telephone. The description is comparable to other previous accounts. What is being seen in south Texas? Lon
Posted by arclein at 12:00 AM

Isn't this where so many illegals die crossing into Texas?