Easter Island: A Popular Theory About Its Ancient People Might Be Wrong 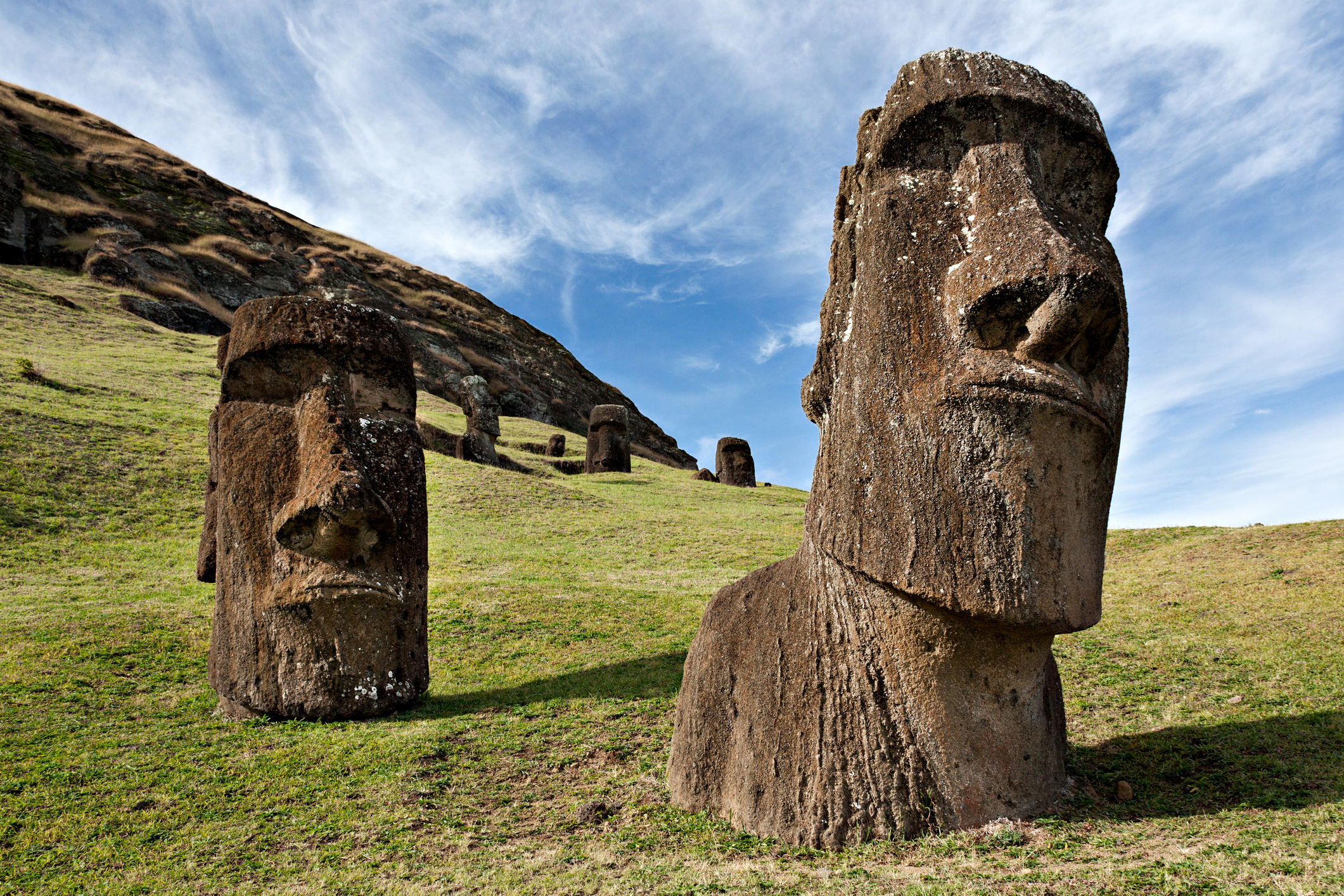 What is troubling about Easter island is that all the trees were wiped out.  This then caused the soil to collapse and it became far more difficult to produce crops.

We have 63 square miles and this suggests that the island could support sustainably around even as high as 60,000 thousand individuals.  We have no evidence that it ever did, but a distant island achieved just those densities.   Communication may never have taken place but i do not believe that.

i also do not buy the short life spans of societies associated with these islands. our ability to recycle a living site must not be underestimated nor the ready available use of the sea to dispose of real waste.  The advent of the European Bronze age launched a global sea faring tradition that got everywhere from around 3000 BC through 2500 BC.  NW Pacific Sea faring was also fully established as well and this led directly to the occupation of Hawaii if it had not happened earlier as well.  Coconut culture surely led to the outrigger canoe.

Once again what is typically missing is the effect of rising sea levels on evidence.  The last disturbance took place around 1159 BC and this likely flooded Doggerland in particular then through subsidence and the like.  My point is that it takes little to clear out tidewater artifacts and we have only been good for a mere 3,000 years.  Thus lack of earlier evidence is not proof of anything.

Easter Island: A Popular Theory About Its Ancient People Might Be Wrong

“Rapa Nui is not a story about collapse.”

Easter Island, also known as Rapa Nui, is a 63-square-mile spot of land in the Pacific Ocean. In 1995, science writer Jared Diamond popularized the “collapse theory” in a Discover magazine story about why the Easter Island population was so small when European explorers arrived in 1722. He later published Collapse, a book hypothesizing that infighting and an overexploiting of resources led to a societal “ecocide.” However, a growing body of evidence contradicts this popular story of a warring, wasteful culture.

The iconic “Easter Island heads,” or moai, are actually full-bodied but often partially buried statues that cover the island. There are almost a thousand of them, and the largest is over 70 feet tall. Scientists hailing from UCLA, the University of Queensland, and the Field Museum of Natural History in Chicago believe that, much like Stonehenge, the process by which these monoliths were created is indicative of a collaborative society.

Their research was published in August 2018 in the Journal of Pacific Archaeology.

Study co-author and director of the Easter Island Statue Project Jo Anne Van Tilburg, Ph.D., is focused on measuring the visibility, number, size, and location of the moai. She tells Inverse that “visibility, when linked to geography, tells us something about how Rapa Nui, like all other traditional Polynesian societies, is built on family identity.”

Van Tilburg and her team say that understanding how these families interacted with the craftsmen who made the tools that helped create the giant statues is indicative of how different parts of Rapa Nui society interacted.

Previous excavations led by Tilburg revealed that the moai were created from basalt tools. In this study, the scientist focused on figuring out where on the island the basalt came from. Between 1455 and 1645 AD there was a series of basalt transfers from quarries to the actual location of the statues — so the question became, which quarry did they come from?

Chemical analysis of the stone tools revealed that the majority of these instruments were made of basalt that was dug up from one quarry. This demonstrated to the scientists that, because everyone was using one type of stone, there had to be a certain level of collaboration in the creation of the giant statues.

“There was more interaction and collaboration.”

“We had hypothesized that elite members of the Rapa Nui culture had controlled resources and would only use them for themselves,” lead author and University of Queensland Ph.D. candidate Dale Simpson Jr. tells Inverse. “Instead, what we found is that the whole island was using similar material, from similar quarries. This led us to believe that there was more interaction and collaboration in the past that has been noted in the collapse narrative.”

Simpson explains that the scientists intend to continue to map the quarries and perform other geochemical analysis on artifacts, so they can continue to “paint a better picture” about Rapa Nui’s prehistoric interactions.

After Europeans arrived on the island, slavery, disease, and colonization decimated much of Rapa Nui society — although its culture continues to exist today. Understanding exactly what happened in the past there is key to recognizing a history that became clouded by colonial interpretation.

“What makes me excited is that through my long-term relationship with the island, I’ve been able to better understand how people in the ancient past interacted and shared information — some of this interaction can be seen today and between thousands of Rapa Nui who still live today,” says Simpson. “In short, Rapa Nui is not a story about collapse but about survival!”

Sarah Sloat is a writer based in Brooklyn. She has previously written for The New Republic, Pacific Standard, and McSweeney's Internet Tendency.
Posted by arclein at 12:00 AM