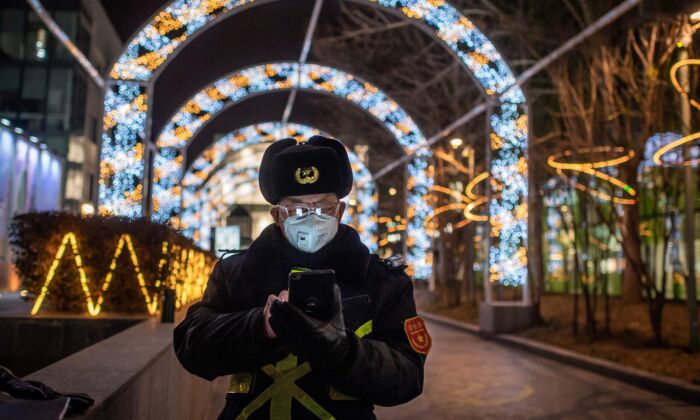 Here is the problem.  This is exactly what you would do when faced with a huge outright  die off..  By closing the electronic account, it is possible to provide a record and effectively confirm death and actually body removal as well.

The rest of the possibilities are somewhat reasonable, particularly the removal of migrants who suddenly lose access to their work place.  It also coincides with the lock down as well.

And of course, cutting of cell phone service blocks easy access to work as well.

my sense is that a lot of folks got sent willy nilly home without their cell phone access to prevent easy return.

Over 21 million cell phone accounts in China were cancelled in the past three months while 840,000 landlines were closed, Beijing authorities announced on March 19. Deaths due to the CCP virus may have contributed to the number of account closings.

Cell phones are an indispensable part of life in China.

“The digitization level is very high in China. People can’t survive without a cell phone,” Tang Jingyuan, a U.S.-based China Affairs commentator told The Epoch Times on March 21. “Dealing with the government for pensions and social security, buying train tickets, shopping… no matter what people want to do, they are required to use cell phones.”

“The Chinese regime requires all Chinese use their cell phones to generate a health code. Only with a green health code are Chinese allowed to move in China now,” Tang said. “It’s impossible for a person to cancel his cell phone.”

China introduced mandatory facial scans on Dec. 1, 2019 to confirm the identity of the person who registered the phone. As early as Sept. 1, 2010, China required all cell phone users to register the phone with their real identification (ID), by which the state can control people’s speech via its large-scale monitoring system.

Furthermore, Chinese people have to bundle their bank accounts and social security account with their cell phone because all these service’s Apps can detect the phone’s SIM card and then check with the state’s database to make sure the number belongs to the person.

Beijing claimed that the health code is to prevent the spreading of CCP (Chinese Communist Party) virus, commonly known as novel coronavirus. 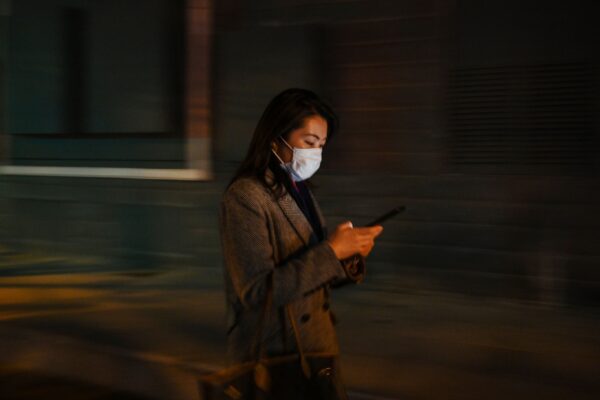 A woman is checking her cell phone in Shanghai, China on March 17, 2020. (HECTOR RETAMAL/AFP via Getty Images)

Chinese Ministry of Industry and Information Technology (MIIT) announced the quantities of phone users in each province in February on March 19. Compared with the previous announcement, which was released on Dec. 18, 2019 for the data in November 2019, both cell phone users and landline users dropped dramatically. In the similar period the year before, the number of accounts increased.

The 2020 decrease in landline users may be due to the national wide quarantine in February, during which small businesses were shut down. The decrease in cell phone users can’t be explained in this way.

According to the operation data of all three Chinese cell phone carriers, cell phone accounts increased in December 2019, but dropped steeply in 2020.

China Mobile is the largest carrier, and holds about 60 percent of the Chinese cell phone market. It reported that it lost 7.254 million cell phone accounts in February, and 0.862 million in January. But in Dec. 2019, it gained 3.732 million more users.

China allows each adult to apply for at most five cell phone numbers. Since Feb. 10, the majority of Chinese students have taken online classes with a cell phone number due to their schools being ordered to keep closed. These students’ accounts are under their parents’ names, which means some patients needed to open a new cell phone account in February. 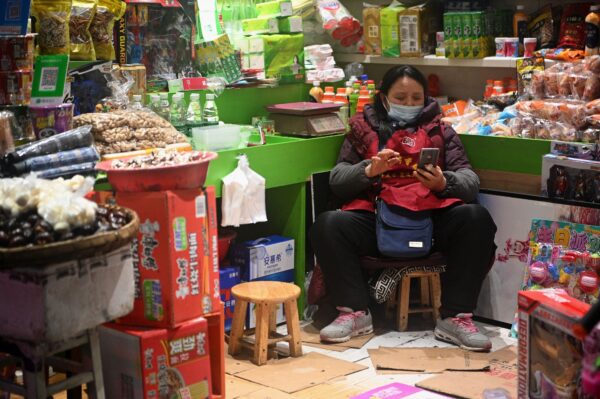 A vendor is using her cell phone as she waits for customers in Jiujiang China on March 6, 2020. (NOEL CELIS/AFP via Getty Images)

The big question is whether the dramatic drop in cell phone accounts reflects the account closings of those who have died due to the CCP virus.

“It’s possible that some immigrant workers had two cell phone numbers before. One is from their hometown, and the other is from the city they work in. In February, they might close the number in the city they work in because they couldn’t go there,” Tang said. Typically, migrant workers would have gone to their home city for the Chinese New Year in January, and then travel restrictions would have prevented their returning to the city where they held a job.

On March 17, Meng Wei, spokesman of Chinese National Development and Reform Commission, said at the monthly press conference in Beijing that except Hubei, all provinces reported that more than 90 percent of their businesses resumed to work. In Zhejiang, Shanghai, Jiangsu, Shandong, Guangxi, and Chongqing, almost all businesses resumed production.

The economic dislocation caused by shutdowns in China may have also led some people who have an extra cell phone to cancel it. With business poor or stopped, they may want to carry the extra expense.

“At present, we don’t know the details of the data. If only 10 percent of the cell phone accounts were closed because the users died because of the CCP virus, the death toll would be two million,” Tang concluded.

The reported death toll in China has not matched what can otherwise be known about the situation there.

A comparison with Italy suggests the death toll is significantly underreported. Italy adopted the solutions that the Chinese regime used in China and experienced a pandemic. The CCP virus death toll in Italy of 4,825 translates to a death rate of 9 percent. In China, with a much larger population exposed to the virus, the reported death toll of 3,265 results in a death rate of 4 percent, less than half that reported in Italy.

The activity in the CCP virus epicenter in Hubei Province seems to contradict the reported death toll in China. The seven funeral houses in Wuhan, China were reported to be burning bodies 24 hours a day, 7 days a week in late January. China also has used 40 mobile cremators, each capable of burning 5 tons a day, in Hubei Province since Feb. 16. In addition, outside some villages bodies have been observed being burned in open air pits.

Lacking data, the CCP virus’ death toll in China is a mystery, which might be far higher than the official number.

The Epoch Times refers to the novel coronavirus, which causes the disease COVID-19, as the CCP virus because the Chinese Communist Party’s coverup and mismanagement allowed the virus to spread throughout China and create a global pandemic.
Posted by arclein at 12:00 AM