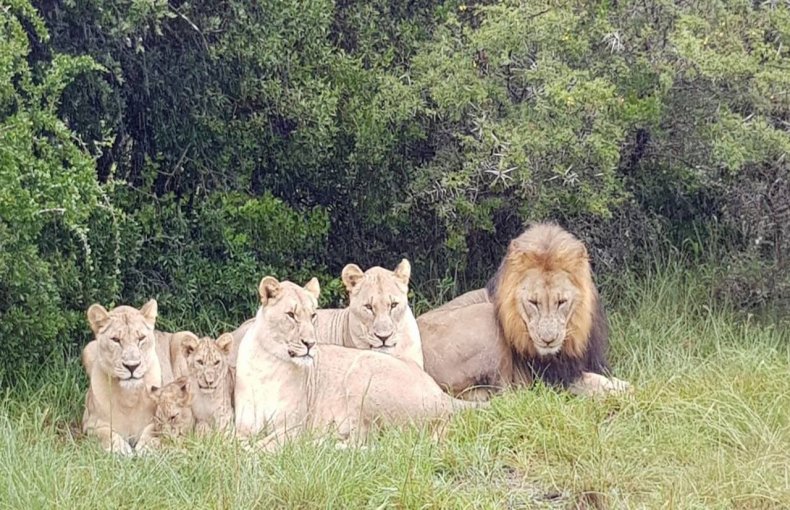 Maybe it needs to be this way.  Men on foot are scant match for a hunting lion pride.
Once the lions are wise to the lack of repercussions, no walker will be safe particularly at night.
Certainly legitimate folk are all mobile and working during the day and also can see were the lions are. Avoidance is not difficult..
Three Poachers Eaten By Lions After Breaking Into Game Reserve To Hunt Rhinos


A pride of lions ate a group of poachers who broke into a game reserve earlier this week in South Africa to hunt rhinoceroses.

Three men were believed to have been eaten alive by the predators sometime between Sunday night and Monday morning after they entered the Sibuya Game Reserve in Kenton-on-Sea to hunt rhinos, Nick Fox, the park's owner, told Newsweek. After the incident, authorities recovered the remains of their parts, three pairs of shoes, wire cutters, high-powered hunting rifles fitted with silencers and a type of ax that is commonly used by poachers to remove rhino horns.

"The only body part we found was one skull and one bit of pelvis, everything else was completely gone," he said. "There is so little left that they don't know exactly how many people were killed, we suspect three because we found three sets of shoes and three sets of gloves." Fox also revealed that rhino poaching groups usually consist of three people.

Although Fox admits that the incident was sad, he also noted that it should send a "message" to other poachers who risk their lives to hunt game in his reserve.


At around 4.30 a.m. on Monday morning, one of Sibuya's anti-poaching dogs gave her handler a warning that something was wrong. The handler then heard a commotion from the lions but didn't investigate as there usually is around the early hours. This is when authorities believed the incident occurred.

One day later, one of the reserve's rangers then stumbled upon the remains of the poachers. After immediately alerting the police, the staffers decided to continue their investigation the next morning as it was getting dark. On Wednesday, Sibuya employees and police found the poachers' gear scattered through the thick bushes.

"They [found] an ax and high-powered rifle with a silencer, which is a surefire sign of rhino poachers," Fox said.

Captain Mali Govender, a police spokesperson, revealed that detectives are investigating the incident to determine exactly how many people were eaten. "We do not know identities, but firearms have been taken by the police and will be sent to the ballistics laboratory to see if they have been used in poaching before," she said.

The search party also enlisted the assistance of a helicopter to locate any survivors. None have been found at the time this article was published.

Sibuya is one of the most popular game reserves in the South African province of Eastern Cape. The facility boasts 30 square miles of wildlife and contains Africa's big five game animals: lions, rhinos, elephants, buffalos and leopards.

Due to its prominence and collection of animals, the park has faced multiple break-ins by poachers in recent years. In 2016, three rhinos were shot dead by poachers who broke into the reserve to cut off their horns.

On Friday, Fox told Newsweek that the reserve had received a large number of phone calls from people concerned about the fate of the lions. "They won't be killed," he said. "The status quo will continue."

In a Facebook post, Fox explained that "lions view a game viewing vehicle containing people as something entirely different from individuals who are walking on the ground.

"Over the last few days game guides and anti-poaching staff have continued to drive game viewing vehicles in the vicinity of this pride to check for any behavioural differences and they have confirmed that to date there have been none," he wrote.


This story has been updated to include additional comment from Fox.
Posted by arclein at 12:00 AM