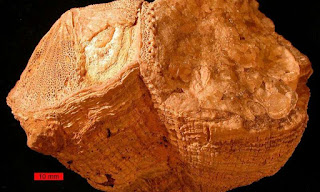 This is a really nice bit of work and it also promises to jin up numbers for other epochs.  After all this tells us that there is a five day change since the Dinosaurs.  We sort of knew as much, but this makes it real

It would be wonderful to establish a real physical time line using these fossils which drove reef building.  We do have millions of miles of core from reefs thanks to the oil industry.


It would also be neat to get more information as well, but i actually think that dating would be good enough.

Earth turned faster at the end of the time of the dinosaurs than it does today, rotating 372 times a year, compared to the current 365, according to a new study of fossil mollusk shells from the late Cretaceous. This means a day lasted only 23 and a half hours, according to the new study in AGU's journal Paleoceanography and Paleoclimatology.

The growth rings allowed the researchers to determine the number of days in a year and more accurately calculate the length of a day 70 million years ago. The new measurement informs models of how the Moon formed and how close to Earth it has been over the 4.5-billion-year history of the Earth-Moon gravitational dance.

The new study also found corroborating evidence that the mollusks harbored photosynthetic symbionts that may have fueled reef-building on the scale of modern-day corals.

The high resolution obtained in the new study combined with the fast growth rate of the ancient bivalves revealed unprecedented detail about how the animal lived and the water conditions it grew in, down to a fraction of a day.

"We have about four to five datapoints per day, and this is something that you almost never get in geological history. We can basically look at a day 70 million years ago. It's pretty amazing," said Niels de Winter, an analytical geochemist at Vrije Universiteit Brussel and the lead author of the new study.

Climate reconstructions of the deep past typically describe long term changes that occur on the scale of tens of thousands of years. Studies like this one give a glimpse of change on the timescale of living things and have the potential to bridge the gap between climate and weather models.

"The high fidelity of this data-set has allowed the authors to draw two particularly interesting inferences that help to sharpen our understanding of both Cretaceous astrochronology and rudist palaeobiology," said Peter Skelton, a retired lecturer of palaeobiology at The Open University and a rudist expert unaffiliated with the new study.

The new study analyzed a single individual that lived for over nine years in a shallow seabed in the tropics—a location which is now, 70-million-years later, dry land in the mountains of Oman.

Torreites sanchezi mollusks look like tall pint glasses with lids shaped like bear claw pastries. The ancient mollusks had two shells, or valves, that met in a hinge, like asymmetrical clams, and grew in dense reefs, like modern oysters. They thrived in water several degrees warmer worldwide than modern oceans.


In the late Cretaceous, rudists like T. sanchezi dominated the reef-building niche in tropical waters around the world, filling the role held by corals today. They disappeared in the same event that killed the non-avian dinosaurs 66 million years ago.

"Rudists are quite special bivalves. There's nothing like it living today," de Winter said. "In the late Cretaceous especially, worldwide most of the reef builders are these bivalves. So they really took on the ecosystem building role that the corals have nowadays."

The new method focused a laser on small bits of shell, making holes 10 micrometers in diameter, or about as wide as a red blood cell. Trace elements in these tiny samples reveal information about the temperature and chemistry of the water at the time the shell formed. The analysis provided accurate measurements of the width and number of daily growth rings as well as seasonal patterns. The researchers used seasonal variations in the fossilized shell to identify years.

The new study found the composition of the shell changed more over the course of a day than over seasons, or with the cycles of ocean tides. The fine-scale resolution of the daily layers shows the shell grew much faster during the day than at night

"This bivalve had a very strong dependence on this daily cycle, which suggests that it had photosymbionts," de Winter said. "You have the day-night rhythm of the light being recorded in the shell."

This result suggests daylight was more important to the lifestyle of the ancient mollusk than might be expected if it fed itself primarily by filtering food from the water, like modern day clams and oysters, according to the authors. De Winter said the mollusks likely had a relationship with an indwelling symbiotic species that fed on sunlight, similar to living giant clams, which harbor symbiotic algae.

"Until now, all published arguments for photosymbiosis in rudists have been essentially speculative, based on merely suggestive morphological traits, and in some cases were demonstrably erroneous. This paper is the first to provide convincing evidence in favor of the hypothesis," Skelton said, but cautioned that the new study's conclusion was specific to Torreites and could not be generalized to other rudists.

De Winter's careful count of the number of daily layers found 372 for each yearly interval. This was not a surprise, because scientists know days were shorter in the past. The result is, however, the most accurate now available for the late Cretaceous, and has a surprising application to modeling the evolution of the Earth-Moon system.

The pull of the tides accelerates the Moon a little in its orbit, so as Earth's spin slows, the Moon moves farther away. The moon is pulling away from Earth at 3.82 centimeters (1.5 inches) per year. Precise laser measurements of distance to the Moon from Earth have demonstrated this increasing distance since the Apollo program left helpful reflectors on the Moon's surface.

But scientists conclude the Moon could not have been receding at this rate throughout its history, because projecting its progress linearly back in time would put the Moon inside the Earth only 1.4 billion years ago. Scientists know from other evidence that the Moon has been with us much longer, most likely coalescing in the wake of a massive collision early in Earth's history, over 4.5 billion years ago. So the Moon's rate of retreat has changed over time, and information from the past, like a year in the life of an ancient clam, helps researchers reconstruct that history and model of the formation of the moon.

Because in the history of the Moon, 70 million years is a blink in time, de Winter and his colleagues hope to apply their new method to older fossils and catch snapshots of days even deeper in time.
Posted by arclein at 12:00 AM