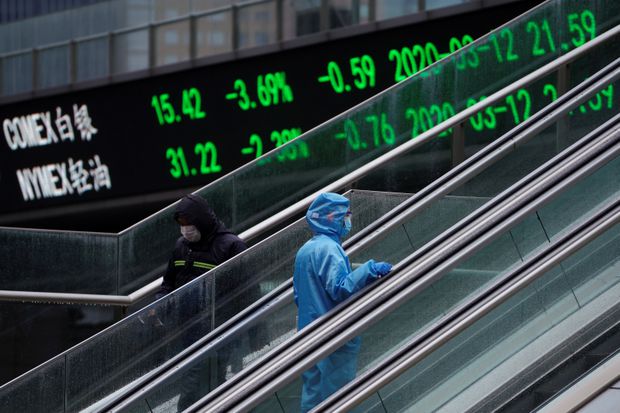 Whether the Canadian connection is true or false hardly matters at  this point, except as a way to deflect away from the CCP itself.

It all helps with keeping their citizens storied which is what you do when you are under potential assault.

There  is a lot of buzz out there, but the best news is that the collapse cycle is becoming apparent as well.  It really will be all over by the end of April.


China’s most outspoken government mouthpiece is promoting an unfounded belief backed by a Canadian conspiracy theory site that the deadly new coronavirus spreading around the world has roots in the U.S. military.

“It might be U.S. army who brought the epidemic to Wuhan. Be transparent! Make public your data! U.S. owe us an explanation!” Zhao Lijian, a spokesman for the Chinese foreign ministry wrote Thursday to his 286,000 Twitter followers.

Who’s ‘flattening the curve’ on the coronavirus, and who isn’t? A global graphic comparison
Q&A: Coronavirus questions answered by André Picard

Chinese internet users have spread the idea, which has no connection to credible scientific conclusions, that COVID-19 is an “American virus,” and that China has been hurt by foreign influence. The first infection in China dates back to Nov. 17, the South China Morning Post reported Friday, and the epicentre of the outbreak is in Wuhan, a major Chinese transportation hub. Scientists have pointed to bats in China as the likely source for the virus, and a market selling wild animals in Wuhan as an important location for its spread to and among humans.

Now, however, Mr. Zhao has given an official imprimatur to the belief that the virus may have a U.S. origin, as the Chinese government mounts what researchers call a counter-offensive to widespread domestic criticism that a slow response and coverups by China’s leadership allowed the virus to spread rapidly in Wuhan and the wider Hubei province.

On Friday, Mr. Zhao revealed a new source for his information: the Centre for Research on Globalization, or Global Research, a site founded by Michel Chossudovsky, a professor emeritus at the University of Ottawa, which has come under investigation by NATO’s Strategic Communications Centre of Excellence over its content. In 2017, the centre told The Globe and Mail that it believes Global Research is an important online actor in promoting the online spread of narratives backed by the Kremlin and the regime of President Bashar al-Assad in Syria. Global Research articles on controversial subjects have sometimes ranked above those from reputable news organizations in online searches.

“They increase the Google ranking of the story and create the illusion of multisource verification,” Donara Barojan, who does digital forensic research for the centre, told The Globe in 2017. She said at the time there was no direct proof of direct connections between the site and any government.

Russia’s government has used online platforms for disinformation campaigns to sow confusion and distrust in government, according to reports prepared for the U.S. government. A 2016 report by the RAND Corporation described a “firehose of falsehood” from Russia that uses “high numbers of channels and messages and a shameless willingness to disseminate partial truths or outright fictions.”

Global Research calls itself “an independent research and media organization based in Montreal.” Mr. Chossudovsky in 2017 declined to discuss whether his site is affiliated with the Kremlin. He has regularly appeared on Russian-backed media outlets like Sputnik and RT, as well as Iran’s state-backed PressTV.

But it is a new development for the site’s content to inform China’s own state-backed narratives.

Mr. Zhao, the Chinese spokesman, linked to an article on Global Research that itself relies heavily on hearsay reported by Chinese state-backed media. For example, Global Research includes a quote it says was published by the People’s Daily on Feb. 23: “Perhaps the U.S. delegates brought the coronavirus to Wuhan, and some mutation occurred to the virus, making it more deadly and contagious, and causing a widespread outbreak this year.” The quote is actually from an article in the Communist Party-backed Global Times newspaper, and comes from a comment made by an anonymous user on China’s Twitter-like Weibo service.

Mr. Zhao is a controversial figure who rose to online prominence in his previous role as a diplomat in Pakistan when he used Twitter as a platform to attack those he considered hostile to China. Western social media – which is virtually all censored in China itself – is “a weapon to counter these negative narratives,” he told an audience in Islamabad in 2018. His tweets have promoted Huawei, accused skeptics of Chinese overseas investment of “dirty lies,” and attacked the U.S. for racism.

“This is a time for Chinese diplomats to tell the true picture,” he told Buzzfeed News in 2019.

His promotion of the theory that COVID-19 originates from the U.S. comes as the Chinese government “faces significant challenges,” said Lynette Ong, a scholar of authoritarian politics at the University of Toronto.

China fought successfully to keep COVID-19 from being named after Wuhan, the city at the epicentre of its initial spread. Now it is “trying to reshape the global narrative about the origins of the virus,” Prof. Ong said.

Such a counter-attack comes amid festering anger in China about the government’s response to the virus and its muzzling of doctors who raised early alarm. One of those doctors, Li Wenliang, subsequently died from COVID-19, sparking nation-wide demands for freedom of speech – demands that have subsequently been scrubbed by China’s powerful censorship regime. China has itself fought rumours, also not backed by scientific inquiry, that the virus originated in a virus laboratory in Wuhan.

But the censors have allowed open conversation online about the theory of U.S. involvement in the virus.

”No matter whether it’s because there’s tangible evidence or because it’s an attempt to change the way we deal with this public opinion war, I will support Zhao Lijian’s fight,” one person wrote on Weibo Friday. “Using Zhao Lijian’s position to openly argue against America mean that we might have acquired tangible evidence,” wrote another.

But the preponderance of scientific evidence suggests the virus originated in Hubei province, said Raina MacIntyre, a doctor and epidemiologist who leads the biosecurity research program at Australia’s University of New South Wales. Common sense would suggest the same, she said. She also dismissed theories that the virus was deliberately released.

“Look at motive,” she said.

“When you look at the impact this has had on the United States and China – it’s been catastrophic for both. There’s no gain to be made by either China or the U.S.”

With reporting by Alexandra Li
Posted by arclein at 12:00 AM