When the Communists Abolished the Weekend 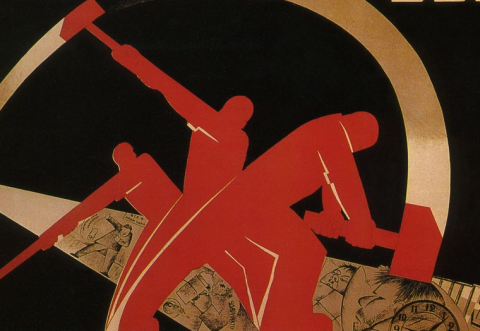 There are sound biological reasons that working weekends will backfire.  Yet it is not just the Communists who had to try it on.  Your troops are never fresh to charge the workload and soon operate at dullard level.  That can never work out.

It was accepted by while Africaans that black workers were indifferent and dullards.  A manager back in the day who is a friend of mine discovered that they never had a proper breakfast.  He laid on breakfast and turned a failing factory into a global leader that set standards in productivity.  It is sometimes that easy.

This also spells out the problem with any form of slavery.  Heavy work demands 4000 calories.  ask any army.  A lot less guarantees a lot less work.  It is obvious of course but those in charge are stupid of course.

The world changes when we provide a guaranteed four hour shift for a solid workman's breakfast and a bed to sleep in and a shower all if needed.

The rest of the day can be another job or any damn thing.
When the Communists Abolished the Weekend

But it's not capitalism that's doing this dirty work. The decline of the weekend comes from the decline of religiosity, and the fact many Americans would rather work more — so as to buy more goods and services — than enjoy leisure time.

The decline of the weekend is a bottom-up phenomenon. It's not forced on us from above by corporate CEOs and bankers.

There was a time, though, when the weekend was completely abolished from above; when an entire society was forced to work around an ever-changing and never-stopping work schedule designed to maximize output and to reduce allegiance to family or religion.

Those were the days of the "nepreryvka" a continuous work week designed by — who else? — Soviet communists.

Through mid-1929, workers in the Soviet Union had a standard six-day workweek. Working on Saturday was still a common practice in most of the world. Even in the United States, working half days on Saturday would be common into the early 1950s. But Sundays, even in the USSR, were a common day off when factories were idled and workers largely stayed at home with family.

Stalin, however, didn't like the idea of idling equipment for an entire day. Moreover, having a continuous seven-day week would give state managers more flexibility in scheduling shifts throughout the week.

In late September 1929, the Soviet state implemented a new system of continuous labor. This didn't mean individual workers worked seven-day weeks — five and six-day work weeks were staggered throughout the month instead. But this did mean that there was no common day during which family members could reasonably expect to be at home on the same day at the same time.


“What is there for us to do at home if our wives are in the factory, our children at school and nobody can visit us? It is no holiday if you have to have it alone.” Another griped: “How are we to work now, if mother is free on one day, father on another, brother on a third and I myself on a fourth?”

From the perspective of the communist central planners, this was an added bonus. In the Marxist mind, the family was a hated bourgeois relic of capitalism. If the new work system made it impossible for families to meet up on a schedule, that was all to the good.

And, of course, by abolishing Sunday as a weekly holiday, the new system made it extremely difficult to attend church services on a regular basis. Thus, in one move, the Soviets were able to strike a blow against both families and religious institutions. All that was left was the state — and the state-mandated labor.

Participation in this system, of course, was not optional. Political scientist Paresh Chattopadhyay notes:


"Socialist full employment" policy was carried to the hilt by demanding in 1930 that "no reasons to refuse the work offered are to be taken into consideration excepting ill-health, confirmed by a hos­pital certificate.

...a whole series of measures were adopted by the Soviet authorities during the 1930s to discipline the newly recruited proletariat — such as, measures concerning punishment against absenteeism, introduction of "labor books", prohibition of voluntary mobility as between work places.1

These policies were applied primarily to men. But women joined the work force in ever greater numbers as well. Impelled by a low standard of living, personal preference, and by policies that devalued domestic work, the percentage of women in total employment steadily rose from 27 in 1932 to 39 in 1940.2

As one would expect from the Soviets, the system did not work as well as hoped.

It was easy enough to order people to work at specific times and work a specific number of hours. But labor is just one component of a functioning economy. The Soviets found it incredibly difficult to manage raw materials and fuel supplies so that they could flow into factories to keep up with demand as workers and machines were placed on a more robust schedule.3 As a result of shortages in fuel, necessary parts, and other essentials, equipment was often left idle. Moreover, early on in the experiment, a lack of down time for equipment meant more frequent malfunction. Workers didn't have enough time to repair and maintain equipment. The central planners soon retreated on his, however, and were forced to allow for more idling of equipment.

The grandiose plans for nepreryvka thus led to even more idle factory time than before in some cases.

In spite of all these issues, however, national production increased from 1929 to 1930.4 One could not describe this system as more efficient, however. The disruption to basic cultural patterns of life took their toll on workers, and much of the increase in production during his era was made possible by a workforce that grew at a faster pace than the the overall population. This was largely due to the growing participation of women in the industrial workforce.

Ultimately, the problems with the continuous work week piled up and the nepreryvka was finally discontinued in 1940.

It was just too difficult to uproot the system of the seven-day week and the deep-seated cultural habits it facilitated.

This didn't mean a return to "normal." The Soviet economic system never solved the problem of motivating workers and maximizing output — "maximization" was defined by the state, of course. After nepreryvka, right up until the end of the regime, the Soviets used every trick in the book. For example, the soviets employed compulsory third shifts for many workers in the middle of the night. But even in these days of heavy punishments for disobedience, more highly-ranked and technical staff were often absent and one government report complained "each shift goes off without waiting for the next."5 Contrary to the idea that workers under a communist system are paid a "living wage" no matter what, labor regulations stipulated workers would only be paid for being productive. Many workers, for example, were paid for "piece work." That is, they were only paid for each item they produced. Construction projects were only paid in accordance with what had been budgeted by government edict. If a project went over budget, someone had to absorb the difference. And that "someone" was never high-ranking communist officials. In other cases, if equipment stood idle — even if due to an absence of needed parts never delivered by others — "hours spent idly ... would be paid at only 50 percent of the normal rate, that is to say next-to-nothing."6

By the 1970s, though, actual production was so anemic that few workers were paid in line with what they produced. Had they been, many would have starved. So mid-level managers regularly falsified paperwork to make workers and factories seem more productive than they were. Eventually, the system became one in which workers were earning little, but producing even less.

At that point, its unlikely even a seven day work week would have saved the system from collapse. Fortunately, the Soviet state was, by then, too weak to try it.
Posted by arclein at 12:00 AM