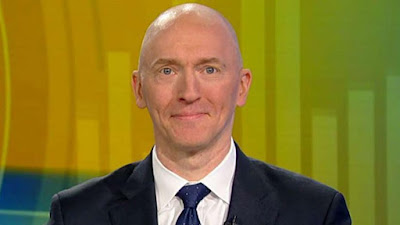 The one thing that is not commented on is the specific motive for targeting Carter Page is that it allowed use of the two hop rule for the internal surveillance of trump campaign communications and had zero to do with investigating Carter Page.  Page may well have been paid to play this role as well and should be asked.

My point here is that Caret Page was either a CIA asset or a FBI asset with a real back history and spying success.  What he never was, was a Trump Asset.  So yes, his tale of victim will need to be fully checked out.

So the IG may well be right as far as the letter of the law inside the world of the FBI.  That was his purview and we can leave it at that.  The real action took place outside that system for them to wink wink play against.

What we have is an investigation by Durham to uncover a conspiracy to commit Treason, ordered by Barack Obama.  The willing soldiers are all fully exposed.  It will be ugly.

Imagine the Department of Justice inspector general (IG) conducting a review of the Jeffrey Epstein case. It might read something like this: “While it is clear that Mr. Epstein abused minor girls, there is no documentary or testimonial evidence that he was motivated by a deviant sexual interest in those young girls.”

The newly released IG investigation into FBI abuses of the Foreign Intelligence Surveillance Act (FISA) enshrines the report’s main catchphrase — “documentary or testimonial evidence” — in the hall of fame for legalese absurdities.

The report by IG Michael Horowitz is one long expose of a confluence of actors at the top of the FBI who, by their own words, despised Donald Trump and came together to open and run an investigation into his 2016 presidential campaign, falsifying documents, withholding evidence and using a confidential source who had stated clearly that his goal was to prevent a Trump presidency.


Despite these flashing lights, the IG essentially stated that since no one admitted to being motivated by their personal biases, he could not reach that conclusion. Thanks for that, but most Americans unencumbered by a law degree can detect the obvious without a lot of effort.

Ironically, the devastating decisions and abuses that the report goes on to enumerate are only explained with any kind of logic by the swift current of personal animus gripping the main protagonists then at the top of the FBI.

Let’s start with their decision to open a counterintelligence case into the Trump campaign and four U.S. citizens affiliated with the campaign.

The IG concluded that fired FBI director James Comey’s “Crossfire Hurricane” team had “sufficient” justification for starting the investigation so nicknamed. He then, conveniently, provided the exact words on which the team relied. These are telling.

The FBI received a notification from a friendly country, which is known to be Australia, that a Trump campaign adviser, George Papadopoulos, had received a “suggestion” from Russia that it could assist the campaign by releasing information “damaging to Mrs. Clinton (and President Obama).”


That was it. That’s the justification. Here’s what that thin predication was adequate for in the FBI I grew up in: An agent from a field office, not headquarters, would have contacted Mr. Papadopoulos, interviewed him to get more details, enlisted his cooperation against the Russians, if warranted, and that would have been it.

Instead, an investigative team of top officials at FBI headquarters, who disliked Trump very much, received this information that happened to threaten Trump’s rival, Hillary Clinton, and so initiated a full investigation with every intrusive investigative tool available to be used against the Trump campaign. Normally, the FBI starts a less intrusive preliminary investigation first — especially with such flimsy information — but not in this case. One wonders what explains such eagerness.

The IG can assess that the investigation was technically justified, but in tradition and common counterintelligence practice it was not — particularly, and especially, since it involved the incredibly sensitive specter of investigating a presidential campaign. It was overkill on very lightweight assertions by a team of individuals in leadership positions who appeared to be driven by personal agendas, rather than normal protocols and practices.

As a full investigation, the Comey “Crossfire Hurricane” team could unleash every investigative weapon at the bureau’s disposal — and they did. According to the report, the team used techniques usually reserved for suspects actively spying and stealing national security secrets on behalf of a foreign enemy.

The team ran confidential sources and undercover operatives against members of a presidential campaign and secretly recorded their conversations. Please understand, this was unprecedented in the history of the FBI.


And, in what amounts to a profound disgrace to everything the FBI stands for, the team obtained authorization to electronically eavesdrop on a U.S. citizen, former Trump campaign adviser Carter Page, through duplicity — by withholding information, falsifying information, using uncorroborated information, and by using a source whom the FBI knew was unreliable and not credible.

And they did it four times. Major espionage cases don’t typically run FISA intercepts nearly that long. Again, this type of reckless rush and inexplicably irresponsible behavior only begins to make sense when viewed through a biased filter.

The IG report documented a laundry list of abuses of the FISA process, but it did not seriously attempt to investigate why the abuses occurred. This must be done. There needs to be some type of assessment of accountability. If these dismal actions were done with devious intent, that is fraudulent and possibly criminal.

The abuses are bad enough. Yet, a failure to examine responsibility would be devastating to an FBI that was hijacked by a rogue, biased leadership team and is trying to rebuild the trust of the American people.

The abuse of Carter Page by this team at the top of the FBI is unconscionable. The report is troubling to read for anyone who has been part of that storied institution. May it spur all appropriate reforms that will help restore confidence in the FBI’s vital objectivity and unbiased mandate.

Kevin R. Brock, former assistant director of intelligence for the FBI, was an FBI special agent for 24 years and principal deputy director of the National Counterterrorism Center (NCTC). He is a founder and principal of NewStreet Global Solutions, which consults with private companies and public-safety agencies on strategic mission technologies.
Posted by arclein at 12:00 AM