"The Global Institutional Architecture Is Collapsing" ? 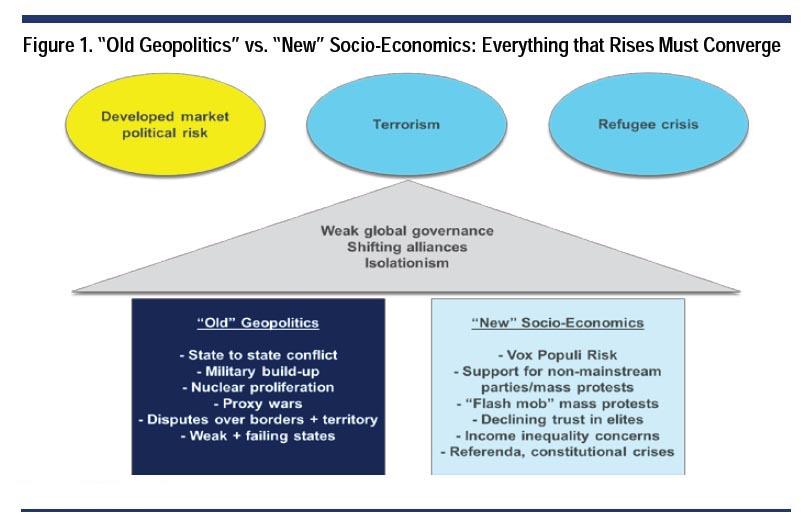 Things to think about here.  The big news is that live births have dropped a full third just in the past three years.  That means that China is now on the fast road to a population of around 700,000,000 and a direct loss of about the same amount.  None of this will happen the same way outside of China.

We do have concerns here regarding the global infrastructure. Yet it is a work in progress and the first step is focused on developing the right type of leadership everywhere.  This is clearly underway.  Thus i am obviously much more optimistic.

Re engineering the architecture happens to be way over due simply because it is essentially seventy years old.  At the very least it needs to properly integrate the whole former soviet Union now ready for such an event.

It is also necessary in order to properly deal with China in particular and with South East Asia and India in the not so distant future.  That too is coming.

Submitted by Michael Every of Rabobank

It’s December, and the start of the season of good will to all and peace on earth. Not much of that about, of course.


In the UK, the election has been interrupted by the terrorist attack at London Bridge, which both sides are naturally playing politics with in different ways (The Left is soft on terrorists vs. police underfunding and foreign policy, etc.); the latest opinion polls suggest Labour continues to make up some ground but remains well behind, but London Bridge may perhaps see that impetus stalled. Let’s see if the imminent arrival of US President Trump tips the scales, as President Obama did on Brexit, or if he can hold off on commenting as protocol dictates.


In Germany, Angela Merkel’s coalition partners the SPD have just elected new leadership, and they have veered to the left, hardly a surprise against this global backdrop, but likely accelerating the eventual collapse of the current government and opening up questions about what any new one could look like. Instability, or at least uncertainty, at the heart of the Eurozone is certainly not going to be welcome to investors – yet could it herald an imminent fiscal shift?

Tomorrow and Wednesday will also see the 2019 NATO summit, again in London, where the world’s largest military alliance will get together and try to decide what it is for and if it still has a purpose. Trump continues to put pressure on all members to spend the pledged 2% of GDP to keep it a fighting force vs. Russia, and perhaps China(?): relatively few do or show they even want to (e.g., Germany). He’s is also going to bring up Huawei and 5G to discuss. President Macron of France has called NATO “Brain dead” due to the absence of US leadership--I thought it was leading?--and has suggested it should shift from seeing Russia or China as potential enemies and refocus on terrorism: does France keep its nuclear deterrent to deal with events like London Bridge? President Erdogan of Turkey, the second-largest contributor militarily after the US, has no problems making friends with Russia and China--he is buying Russian weapons now--but has publicly called Macron “Brain dead” too. And Jeremy Corbyn, who would of course be the UK PM in under two weeks if the polls are wrong or misleading, has stated that NATO should be used to fight inequality: bomb the rich? Or spend as much on defence as he is pledging on everything else to rebuild British (defence) industry and provide quality jobs? It should make for a remarkable meeting one way or another: at the very least, it will be a world-class exercise in papering-over-cracks.


Does this actually matter for markets? Well, it depends. If the markets in question are only looking at things like the bounce in Chinese PMI data (the headline PMI rose to 50.2 from 49.3 in October, and the private Caixin index edged up to 51.8 from 51.7), or at US Black Friday spending (brick and mortar sales were up 4.2% y/y according to First Data, and on-line shopping pulled in USD7.2bn, up 14% y/y), then perhaps not – all is well with the world! Or the same markets might instead focus on China’s Global Times reporting that Beijing is insisting on the US rolling back tariffs for a trade deal, NOT just the delay of the looming 15 December tariffs, as the price of any ‘phase one’ – in which case all is decidedly not well. Expect USD/CNY and USD/CNH to continue to hover around the Lucky Seven level until this is resolved, of course. (But underlying our CNY bearishness, the data the market isn’t talking about this morning is that China is apparently set to see just 11m births in 2019 in a population of 1.4 billion. That’s down from 15.2m in 2018 and 17.2m in 2017. If true, its demographics are vastly worse than the already-poor projections: it is going to be very old long before it is rich enough to retire, and growth will suffer without automation, innovation, or immigration.)


Yet from data to the bigger picture: consider it was the likes of NATO that built the post-Cold War (1?) world within which these global markets now operate. As Polanyi pointed out back in The Great Transformation, though not in so many words, ‘free markets aren’t free’ – they are carved out of the political jungle with force, and require constant tending to stop them from being over-run. In that respect, we can posit that the problems in NATO are symptomatic of a broader collapse of the global institutional architecture in the face of populism.

But does that matter in a world which, as Branko Milanovic argues in his new book, and as markets continue to price for, capitalism is actually triumphant and there is no genuine alternative being offered by NATO’s enemies? Perhaps not, which of course fully supports our house view that on rates, “lower for longer” is now “lower forever”. China’s (and Russia’s) state-capitalist models certainly imply lower forever as the cost of capital is suppressed for national/geostrategic goals; in the West, markets are as utterly reliant on central-bank largesse, which hasn’t had any geostrategic goals up to now, but which may be about to get some.


Yet this does not mean there won’t be major financial market volatility if the architecture crumbles. You cannot think of a world dominated by multi-polar state-capitalism vs. a retreating more-free-market US-dominated system without seeing: 1) huge shifts in the USD and all resultant markets – either up, as its rivals falter, or down as its rivals combine to topple it (with what exactly?!); and 2) uncomfortable parallels with the pre-WW1 period. Like I said, not much peace on earth, sadly.

Another sign of the end of institutional architecture. The Apostrophe Society has closed down after admitting defeat in its quest to get Brits to understand when and how this simple but crucial grammar point is used (where tired eyes mean even The Global Daily occasionally falls short). So thats it for its members hopes for its vs. its; and a full societal circle from cave painting to Renaissance men-of-letters back to emojis beckons with a thumbs up. Perhaps current fuzzy market pricing fits perfectly in age where nobody can communicate properly anymore.

And another sign of crumbling related to architecture: Aussie building approvals slumped 8.1% in October, more than reversing the surprise 7.2% surge seen in September and vs. a consensus -1.0% figure. That puts them down -23.6% y/y. Likewise, Q3 Aussie company operating profits were -0.8% q/q vs. an expected 1.0% gain, and inventories -0.4% not the -0.2% consensus. Somehow Aussie yields are still up on the day despite those clear recession warnings: perhaps the apostrophe was in the wrong place.
Posted by arclein at 12:00 AM