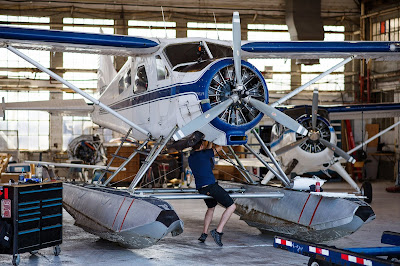 This route is an ideal test bed for the electric protocol.  Many daily flights between two large cities that is only around fifty miles apart.  It is why Vancouver is the largest single seaplane operation in North America.

Once again it is about the ultimate range, but this is an excellent place to start. It is also a long term market as well that can be serviced early on.  The potential raw cost saving is also extremely important.

All good to see.

For a sci-fi airplane, the de Havilland Canada DHC-2 Beaver looks nothing like the future: stubby wings, a burly fuselage and two fat pontoons. It first flew in 1947.

Nonetheless, when a Beaver lifted off from Vancouver Harbour Tuesday morning, it signaled what many aerospace industry insiders say is commercial aviation's future. For the first time, an aircraft that carries paying passengers took off with an electric motor.

Startup magniX’s Magni500 electric motor powered the Vancouver-based Harbour Air’s Beaver into the air. The small airline's chief executive, Greg McDougall, piloted the aircraft during the brief flight over the water, followed by a gentle landing in the harbor. He taxied the plane back to a dock, where a small crowd watching the event cheered.

Plenty of electric-powered aircraft have flown, but Harbour Air is the first airline that is betting its business on electric motors. The airline expects regulators to certify its retrofitted aircraft in about two years, with commercial flights beginning in 2022.

For years, the aerospace industry has been talking about whether electric-powered commercial air travel is viable. Tuesday’s flight declared “this is real,” magniX CEO Roei Ganzarski tells Fortune. “This is an airline flying their own aircraft.”

MagniX is in talks with other airlines, although Ganzarski declined to say how many, citing confidentiality agreements. “There are definitely a lot of conversations going on,” he says.

Retrofitting aircraft is one part of magniX’s two-prong strategy to establish itself as a leader in the increasingly crowded electric motor sector. Three of the company’s smaller Magni250 motors will power Israel-based Eviation’s Alice aircraft, which is specifically designed to be electric-powered and can fit nine passengers.

Both Eviation and magniX are owned by Singapore-based Clermont Group, whose owner, Richard Chandler, has a reputation for making long-term investments. Clermont is fully bankrolling magniX, saving the motor maker from depending on uncertain fundraising cycles, Ganzarski says.

Clermont put $76 million in Eviation Aircraft in January for a 70% stake, according to a U.S. Securities and Exchange Commission filing. Ganzarski was named chairman of Eviation’s board in November.

At the Paris Air Show in June, Massachusetts-based Cape Air placed the first firm order for the Alice, which is expected to first fly in 2020 and to enter service two years later. The sleek aircraft is expected to have a range of nearly 600 miles under electric power compared to the retrofitted Beaver’s 100-mile range.

Pound for pound, batteries pack far less energy than aviation fuel, which has as much as 40 times greater energy . That means batteries are stuffed everywhere there is space in Harbour Air’s Beavers, Ganzarski said.

Hybrid airliners likely will precede all-electric jetliners. Airbus is considering offering a hybrid option of the successor to its single-aisle A320. The European airplane maker is early in the concept phase for that future aircraft, which is not expected to roll out until the mid-2030s. Airbus’ rival, Boeing, is pursuing hybrid aircraft as well. It acquired Zunum Aero, a Seattle-area startup developing a small passenger plane.

In the meantime, short-haul hybrid aircraft, such as Zunum’s ZA10, and all-electric ones like the Alice promise to slash operating costs. Ganzarski expects it to be 60 to 80% cheaper to operate than fossil-fuel aircraft.

A 100-mile flight in the nine-passenger Cessna Caravan, one of the most popular short-haul aircraft, costs more than $300 in fuel. “In an electric Caravan, you will spend $6 to $12 on electricity” to charge its batteries, he said. MagniX is currently flight-testing a retrofitted Caravan at Moses Lake in central Washington.

Maintenance costs will be lower as well for electric motors compared to internal combustion engines, which have more moving parts creating much more extreme conditions. An all-electric airplane likely will have higher upfront costs compared to traditional planes. Operators will have to replace batteries. That could be as often as every few years, depending on how often the planes fly, according to Fehrm.

Fehrm is not so optimistic. He writes that the industry is still in the initial “peak of inflated expectations.”
Posted by arclein at 12:00 AM