Please read Mike Adams interpretation of present events.   DEM behavior through this so called impeachment farce has been outright illegal or more politely extralegal.  This absurdity can only be justified by an underlying DEEP STATE criminal seizure of power.

The intent is to also remove Pence and first install Pelosi who then appoints HRC.  From that sudden seizure of power, it is immediately possible for HRC to conduct a full communist takeover by massive executions.  It all has to be sudden and hours now matter.


Except they can not change things in the Senate and that may be good enough to prevent this going any further.  i tend to think that this is the DEEP STATE plan of action.  Yet i do think that those black mailed Senators have their backs to the wall and can not go along with such a scheme.  It cannot really be done.  Worse it is certain that the Marines will not allow a criminal proceeding to eliminate POTUS.  Has the DEEP STATE just figured this out?  Did they want what is truly coming?


The rule of law is now rising inside the USA and the DEEP STATE will face the consequences of past corruption.  This is their last desperate effort and it is all in the ring now.

3742
https://twitter.com/M2Madness/status/1208769369171476480
WHY IS PELOSI HOLDING THE [2] ARTICLES OF IMPEACHMENT?
How do you introduce the TRUTH about what happened to the PUBLIC?
What 'value' might exist by attempting to BLOCK 'PUBLIC' testimony/hearings?
Would educating the public through the Senate prior to Barr/Durham/Huber release(s) be important?
Narratives are created and pushed to prevent the public from discovering the TRUTH.
ENEMY OF THE PEOPLE.
Q

3741 Why are the [2] articles being held by Pelosi?
Will holding actually impact the decision of the Senate?
No.
Will holding actually provide a better scenario [public opinion] to [D]s?
No.
Will holding actually 'sway' select Senators to change their vote?
No.
When blackmail and threats no longer work…….
Why are the [2] articles being held by Pelosi?
What happens when the articles of impeachment are sent from the House to the Senate?
Can the Senate conduct 'other' business during this time?
No.
What 'value' might exist by holding the articles?
How long do Senate impeachment trials normally take?
What statements have been made re: timing?
Think 'fast-tracking'.
What statements have been made by Chairman Graham re: Senate FISA hearing(s) & witnesses?
WHY IS PELOSI HOLDING THE [2] ARTICLES OF IMPEACHMENT? 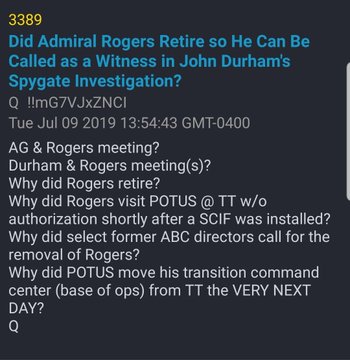 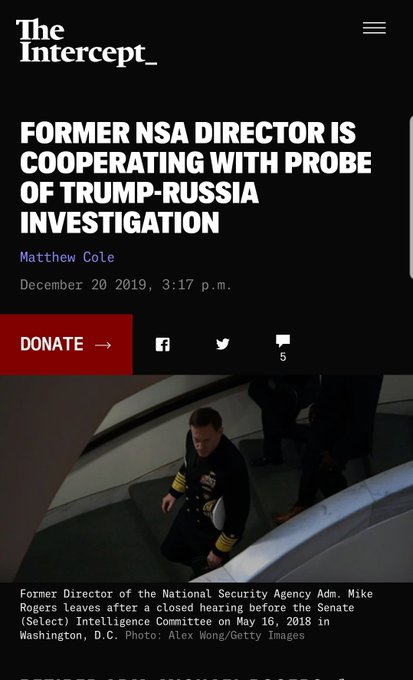 Donald J. Trump
@realDonaldTrump
The Democrats and Crooked Hillary paid for & provided a Fake Dossier, with phony information gotten from foreign sources, pushed it to the corrupt media & Dirty Cops, & have now been caught. They spied on my campaign, then tried to cover it up - Just Like Watergate, but bigger!


Do you believe me now? Democrats actively rolling out scheme to remove VP Mike Pence so they can install Nancy Pelosi, then Hillary Clinton as President… the CRIMINAL COUP IS HERE

(Natural News) The criminal coup scenario I warned you about has finally arrived. A scheme is now active to convict Trump and remove V.P. Mike Pence from power, then install Nancy Pelosi as president. Once there, she will appoint Hillary Clinton as her V.P. with no resistance from the Senate, then she will resign, making Hillary Clinton the president.

I warned about this exact scenario in an earlier article entitled, “It’s ON: The deep state plot to install Hillary Clinton as PRESIDENT this year, bypassing elections altogether.”

As many Natural News have come to realize, I have excellent sources deep inside the bureaucracy, and they fill me in on what’s going down. That’s the only way I was able to write the following words over two months ago, almost word-for-word what we just witnessed with the fake impeachment by the House:

The deep state Democrats (now a monolithic terrorist network that’s trying to take down America) have a plan in place to install Hillary Clinton as President of the United States before the end of this year.

Full details of the plan are explained in the video below. Here’s the summary of the steps the deep state Democrats hope to achieve:

Step 1) Fake an impeachment of President Trump and whip up media hysteria to gaslight the entire nation into thinking Trump is being impeached when it’s all an act (with no real vote in the House, no legal bearing and no legitimacy).

Step 2) Stage an arrest of President Trump, V.P. Mike Pence and his Cabinet members for CNN’s cameras to create the visual impression that Trump is guilty of something. After all, why is he in handcuffs? (Everything with the Democrats is theater. Everything is staged.)

From that point on, the mass arrest and executions of all Trump supporters gets authorized by “President Hillary,” and all businesses or individuals who do not worship the authoritarian Clinton police state will be literally imprisoned in gulags or executed by Clinton’s death squads (which already have plenty of experience from Bill Clinton’s Arkansas days).

This is how it can all be accomplished before the end of this year, if the Democrats manage to succeed in their devious plans.

Do you now see how this plan is unfolding exact as I described over two months ago?

I remember after publishing that article how some critics were attacking the predictions as ludicrous. Now, of course, it has all unfolded exactly as I warned. Suddenly no one is laughing anymore, even about the civil war I’ve been warning about for over two years as well.

If you think this isn’t all headed for blood in the streets, you’re delusional. The Democrats will not stop until they are forced to do so. At some point, that likely comes down to the use of handcuffs, or ropes or a nationwide activation of the Second Amendment to defend the republic against domestic enemies. There are no scenarios now where this ends peacefully. That window of opportunity vanished when 228 Democrats committed treason by voting to impeach President Trump in the House.

And now, doubling down on her lawless treason, Nancy Pelosi refuses to turn over the articles of impeachment to the Senate, making sure the president cannot be found “not guilty” there.

Mike Pence is their next target, and removing him will install Pelosi as president

Right on cue, the lawless Democrats have shifted their focus to eliminating V.P. Mike Pence. As Michael Snyder writes today from his website, The Economic Collapse Blog:

Within hours of President Trump being impeached by the House, the mainstream media was reporting that Adam Schiff “has declared war” on Mike Pence. What Schiff is particularly obsessed about is a phone call between Vice-President Pence and Ukrainian President Volodymyr Zelensky on September 18th.

Pence’s adviser Jennifer Williams listened in on that call, and she testified about it behind closed doors to Schiff’s committee.  Her testimony was later classified, and Schiff has been badgering Pence to have it declassified.

On Tuesday, Schiff sent a letter to Pence alleging that the testimony given by Williams “raises profound questions about your knowledge of the President’s scheme to solicit Ukraine’s interference in the 2020 U.S. presidential election”.

In other words, Schiff is inferring that Vice-President Pence “abused his power” just like Trump supposedly did.

The UK Daily Mail has also documented Schiff’s rabid attempts to criminalize Mike Pence and remove him from power:

House Intelligence Committee chairman Adam Schiff has declared war on Vice President Mike Pence, barely a week after his panel finished its hearings on the impeachment of President Donald Trump.

As an impeachment vote loomed Wednesday, Schiff demanded Pence’s office declassify documents that he claims could show the vice president knee-deep in the Ukraine scandal that has brought Trump to the brink.

Make no mistake: This is all proceeding according to plan. First “impeach” Trump and pretend he’s already removed from power. Withhold the articles of impeachment from the Senate to make sure the Senate can never vindicate the president and find him “not guilty.” Then impeach Mike Pence and just flat-out gaslight the entire country with fake news CNN announcing that Pelosi is now the president.

You’d better get prepared for the coming civil war, because that’s exactly where Democrats are pushing this. It now seems obvious that the only way to stop the lawless, treasonous Democrats is for a million armed Americans to descend upon Washington D.C. and take the necessary steps to defend the republic and restore the rule of law under our duly elected President Donald J. Trump.

That day is rapidly approaching, exactly as I’ve warned for nearly three years.

Keep reading NaturalNews.com if you want to stay ahead of the curve on what’s really going down.

Thank you for sharing
https://aab-edu.net/