Barr Brings Justice Back to the Department of Justice 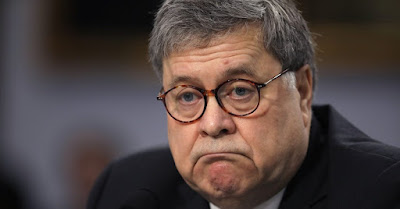 Yes, the hunt is on and public corruption is been noticed.  Understand that the corrupt handful bent the power of the DOJ to partisan objectives.  This went against the entire culture of both the DOJ and the FBI.  All the soldiers were not amused.

Those same soldiers will now have a free hand to set things right.  Blow back is a bitch!

This item is our first real inkling of what things will now be like. the investigation uncovered a whole network of corruption and this will continue.  It was always easy to sacrifice a scapegoat to throw most investigations like this off the trail.  Now, not so much as this shows us.

Barr Brings Justice Back to the Department of Justice

OUTSTANDING! BILL BARR BRINGS JUSTICE BACK TO THE DEPARTMENT OF JUSTICE

SOMETHING THAT HAS BEEN LACKING


Bill Barr just broke up a massive scheme to illegally funnel foreign money into darn near every Democratic political candidate and organization. This is just the start of what’s looking like a very long and painful year for the corrupt Democrats. All I can say is, its about time. On Friday Bill Barr indicted eight people for illegally funneling foreign money to Adam Schiff, Hillary Clinton and many other Democrats.

We are just starting to see the levels of corruption when it comes to the Democrat party. Almost every state’s Democrat organization has been taking illegal money. Almost every leading Democrat is implicated, Hillary Clinton, Adam Schiff, Cory Booker, Ted Lieu, and Jon Tester just to name a few. Excrement floats, at least for a while.

[ recall those 130,000 sealed indictments?  This is the only place in which such numbers can be readily be generated.  The other core centers of criminality would at best generate around 10,000  each - arclein ]

One of the eight people is none other than George Nader. Nader was Robert Mueller’s chief witness in the fake Mueller probe into Russian interference in the 2016 election. This goes to show that Muellers probe was not about Russian interference, but a witch hunt to destroy President Trump. Nader is in Federal custody on other charges.

A Federal Grand Jury in the District of Columbia brought 53 counts of Indictment on Ahmad Khawaja, George Nader, Roy Boulos, Rudy Dekermenjian, Mohammad “Moe” Diab, Rani El-Saadi, Stevan Hill and Thayne Whipple. According to the Indictment, from March 2016 through January 2017, Khawaja conspired with Nader to conceal the source of more than $3.5 million in campaign contributions. Khawaja donated OVER ONE MILLION DOLLARS to Democrat PAC Priorities USA! The Indictment alleges that, from June 2019 through July 2019, Khawaja obstructed a grand jury investigation of this matter in the District of Columbia.

George Nader, one of Mueller’s key witnesses, was charged in a Virginia federal court in July with additional child sex crimes. Nader was previously indicted on June 3rd 2019. The Indictment also alleges that from March 2016 through 2018, Khawaja conspired with Boulos, Dekermenjian, Diab, El-Saadi, Hill, and Whipple to conceal Khawaja’s excessive contributions, (which totaled more than $1.8 million), to various Democratic political committees.
Posted by arclein at 12:00 AM