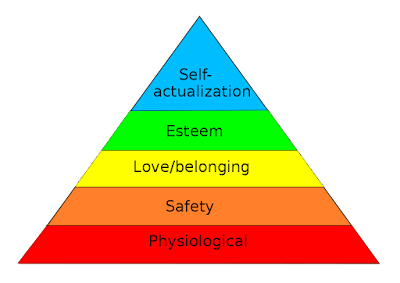 His work has wonderfully informed the commercial world which always had a desperate incentive to answer the questions of human motivation.  That is why it has recieved huge attention there.  It is just not unique to that world.

It will also correctly inform the revitalized natural community emerging in out future as well.  All that will ultimately inform the ideal progression of human sexuality and human success and even failure as well.

Thus his work is truly foundational and thus profoundly useful.  Everyone deserves to be a successful creative and recognized human being.  This is a civilization whose connecting spirit is energized by love well learned.


Abraham Maslow’s 1943 paper “A Theory of Human Motivation” was “written as pure psychology,” notes the BBC, but “it has found its main application in management theory.” It has also become one of the best-known theories of human well-being. But whether you first encountered it in an Intro Psych class or a business training seminar, you’ll immediately recognize the triangular scheme of the “hierarchy of needs,” leading upward from basic physical necessities to full self-actualization.

Maslow’s theory had great explanatory power, offering what he called a “third force" between idealism and materialism. He was in line, he wrote, with the more spiritually-minded pragmatists, or what he called “the functionalist tradition of James and Dewey… fused with the holism of Wertheimer, Goldstein, and Gestalt Psychology, and with the dynamicism of Freud and Adler.” Against the general trend in psychology to pathologize, Maslow offered his paper as “an attempt to formulate a positive theory of motivation.”


His work helped inspire managers to “shape the conditions that create people’s aspirations,” says Gerald Hodgkinson, psychologist at the Warwick Business School,” in order to influence productivity and loyalty in their employees. If this seems manipulative, perhaps Maslow can be held no more responsible than can Freud for the use of his work by his nephew Edward Bernays, who almost single-handedly invented modern advertising and propaganda using Freudian appeals.

Maslow had in mind something grander than managing human capital—"no less,” says Alain de Botton in the School of Life video above, "than the meaning of life.” His quest came itself from a personal motivation. “I was awfully curious,” he once remarked, “to find out why I didn’t go insane.” Or, as de Botton says, he wanted to know “what could make life purposeful for people, himself included, in modern-day America, a country where the pursuit of money and fame seemed to have eclipsed any more interior or authentic aspirations.”

De Botton walks us through the hierarchy, which divides into two dimensions, the material—basic biological needs (including sex) and the need for safety—and the psychological. In this last category, we find the social needs for belonging (“the love needs,” Maslow called them) and esteem, capped with the apex need—self-actualization—the realization of one’s true purpose. “A musician must make music,” wrote Maslow, “an artist must paint, a poet must write, if he is to be ultimately happy. What a man can be, he must be."

“How do we arrange our priorities and give due regard to the different and competing claims we have on our attention?” De Botton asks. In an increasingly disembodied culture, we may ignore or neglect the needs of the body, even if we have the means to meet them, an unsustainable course over the long term. Even those on the path of the “starving artist” will sadly have to reevaluate after a time, Maslow argued, giving priority to their need to eat over their creative aspirations. But Maslow’s is not, or not only, a theory of rational choice.

On the contrary, he had a compassionate response to alienation and poverty of all kinds: “the bold postulation,” he wrote “that a man who is thwarted in any of his basic needs may fairly be envisaged simply as a sick man…. Who is to say that a lack of love is less important than a lack of vitamins?”

The material needs in Maslow’s scheme must be consistently met in order to create a stable base for all the others. Yet, while self-actualization may sit at the top, its lack, according to Maslow, may still affect us as much as much if we suffered from “pellagra or scurvy."

It’s possible to read in the hierarchy of needs a psychological elaboration of Marx’s slogan “from each according to his ability, to each according to his needs,” but Maslow was no dialectical materialist. He valued spirituality, and if he was “ambivalent about business,” he also held out hope that companies would market products to meet consumers’ higher desires as well as their needs for food, shelter, and physical comfort. Maslow died in 1970, and in the ensuing decades, his wish has become a hugely profitable reality.

From religious broadcasting companies to social media to dating and meditation apps, marketers find ever-new ways to sell promises of belonging, esteem, and self-actualization. Perhaps Maslow would see this as progress. In any case, commerce aside, his theory continues to address pressing sociological and existential problems. And as an aid to personal reflection, it can help us notice how we “haven’t arranged and balanced our needs as wisely and elegantly as we might,” says de Botton. We may have denied ourselves, or been denied, important experiences we need in order to become who we truly are.
Posted by arclein at 12:00 AM