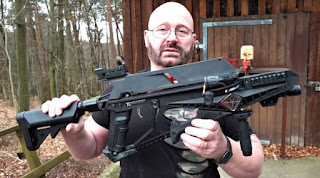 This represents the reinvention of the crossbow while adding in modernity as well.  The mechanism is completely safe to cock and quite natural to do while holding the weapon itself on target.  just like a shot gun.

Targeting range for a small group is at ten meters which implies an effective range of at least twice that and with a stronger pull, out to thirty meters or so.

The reason we care though is rather important.  High powered rifles are clearly heard over substantial distances ensuring that you have one clean shot before all the local game bolts.  Of course, the game knows what it all means.

At the same time most game needs to either be properly stalked or taken from a proper blind and there you are in control of the range.  So we actually have way more control of range than is obviously understood.  You do not hunt successfully by walking through the woods since most folks are outright noise machines.

Now these crossbow machines as shown are not particularly quiet.  Yet the potential for noise damping is there as well.  Once that is done, it should be possible to put a bolt into a boar at twenty meters with a night scope and laser targeter.  Thus we open the prospect of additional shots on a Sooner of Pigs.  Either way we have not really disturbed the whole neighborhood when we have a clean kill without a lot of screaming.

We have a steadily rising pig problem all through North America that will not ever be eliminated.  It will require a major effort combined with actual direct consumption as well to bring it under some level of control.   We need to rework our approach to the emerging problem of wild pigs by actively pursuing capture and transition to a feed lot for finishing to produce ordinary pork.