Why Big Business Prefers Lobbying Government to Competing in the Marketplace 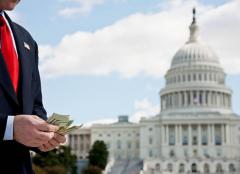 Not least is because they become inured to it all and never rethink the whole protocol itself.  And just where are you going to find a regulator who does not think that his job is necessary?
At best the whole idea needs to be assigned to a community of  stakeholders and governed through the rule of twelve.  It most certainly does not need to include a higher level of governance in which money and power can be brokered outside the bulk of the stakeholders.

This may seem idealistic, except all problems arise from excluding stakeholders.  Making stakeholders abide by community decisions can end all that.  This also blocks selfserving blackmail
.
Why Big Business Prefers Lobbying Government to Competing in the Marketplace

The government — we are told — is necessary to protect us from the excesses of capitalism, and whatever gripes the average person might have about their elected officials, almost all of them can agree upon this.

But there's a problem with thinking the government can ever enter the economy as a fair referee rather than merely playing into the hands of whatever factions are most rich, powerful, and influential; because as soon as a corporation can make more money by angling for government favors than they can by serving customers, that is exactly what they are going to do. Not necessarily because they are evil — but because it becomes the rational thing to do.

On an open market where only voluntary exchanges are permitted a business can only turn a profit by providing something that the general buying public wants. No matter how greedy the corporate fat-cats may be, if they fail to "cough up the goods" (and services) that people want, they will be out of luck. In this way, the market forces of otherwise self-interested people will apply their self-interest to social ends.

Critics may still complain about "tooth and nail" competition, but at least on a free market firms are competing to serve you better and win your disposable income. As soon as the government intervenes in the economy one thing is for sure: companies will compete for control over legislative bodies and the strings of the public purse. This is where the real "tooth and nail" begins.

According to the Sunlight Foundation, America's 200 most politically active corporations spent $5.8 billion on federal lobbying and campaign contributions. That's $5.8 billion spent on political gaming instead of invested in jobs and product development. These incentives drive companies to misallocate resources by making products that the general public doesn't want profitable, and products that they do unprofitable. In other words, the government has become the client of these corporations rather than their customers. And companies often must lobby in self defense.

Firms might lobby or contribute to political campaigns to earn the exclusive right to provide government with their products. This will give them a huge advantage over competitors even if they are producing inferior or more expensive services. They can lobby for subsidies on their own goods or tariffs on cheaper or superior competitors.They can get the government to pass laws about who can and cannot operate in their sector.

Mandatory licenses, fees, reviews, huge stacks of forms, inspections, make it expensive for small start up businesses to enter the market and compete on an equal playing field. Companies spend millions of dollars on accountants, lawyers, actuaries and bureaucrats — not to mention tens of thousands of hours — to make sure they comply with the entangling webs of red tape, and make no mistake this harms the public. The costs are reflected in the price of products, and those are millions of dollars and tens of thousands of hours that are not being spent on more productive work that would benefit others. The rounds of "regulation" inflate corporate profits more and more, by cutting small firms out of the market and directing sales to bigger firms who can afford specialists or whole departments to play the game.

By changing the incentive structure of the economy to favor profit through political influence over serving customers the government corrupts the market rather than moderating its excesses.
Posted by arclein at 12:00 AM