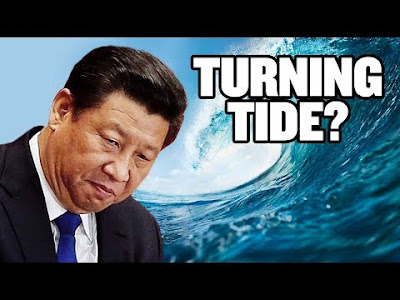 
Suppose that the leaders of the CCP made common cause with the Old NAZIS once they understood that they had access to the USA market and that they could potentially influence the political structure of the USA.  This began right away as a parallel construction under Deng.  It was an insurance policy that allowed them to plausibly plan the destruction of the USA in order to prevent their crimes ever been called to account.

On the ground, this means subverting all possible agents to your control.  Those agents do not need to know anything whatsoever.  Just that cooperation brings support. with tens of thousands of students coming every year you have a huge mass of prospects who can even become highly placed.  what makes it so subtle is that the students do have a minder, but it is hardly invasive and they do not even understand it htat way at all.  They can easily convince themselves that they are free of all that.

Yet it is all a game of numbers. A researcher wins a job in a key laboratory. His minder understands his importance.  He arranges benefits and perhaps uses the target to set up spy tools even unbeknowst.  Again it is all numbers and your best sources can even be intensely loyal American citizens.

The Old NAZIS open the doors to the whole international banking system as well to provide even greater access to capital flows. All critical if you intend to systematically destroy USA global hegemony in particular.  Yet this is all happening in a cut out unrelated to the private wealth creation in China itself.

The SOEs in particular are funded as fiat currency distribution spigots in order to build out the infrastructure in particular.  none of it really earns but that is almost unnecessary.  Their program envisages extending his massive build out globally, but this requires real access to the USA dollar market as no one will accept the Rmn.

Has the CIA also made common cause with the CCP unknowingly or otherwise?  How about the CIA ownership control of the heights of the Media and Information world.  This includes Google in particular.  The broad increase in censorship looks very much like a CCP Great Fire Wall operation.  At best these are outright test runs that can be followed by a full rollout that is aimed directly at controlling the America people by imposing a full censorship system.

So far i do not see the tactical picture improving yet on the ground.  I am certain that this MEME is been countered and there is actually a serious WAR underway now.  Strategically, the CCP and the .  Central Bank system has to be dissolved and replaced with acceptable alternatives, hopefully as safely as possible.  The USA has changed course and has rolled over to a slow evolving offensive.

I expect to see an accelerated extraction of global assets and markets from China and thus CCP control or influence using USA dollar credits.  Opening a trillion dollars in  credits to facilitate rapid industrial deployment to SE Asia and India would make the CCP position completely untenable.  Again we are seeing the start of this.

Expect to see a Hong Kong shock which will serve to sharply choke of CCP liquidity and produce a sharp global market correction that will last until the NewYear..