How hard it is.
We are talking about obsessive attachment.  The big problem is that we attempt to deal with this through our rational mind.  The victim will always rationalize retention.  For most of us, attachment to things usually fades well enough.
Today, families are now getting stretched out in time and passing things on is becoming less of a driver.  This can ease the problem.
Of course, we all hear about the worse cases  Problem is that there is no end of weaker cases as well.  In those situations various stratagems of removal have to also be used.  And we live in an age of over abundance of things.  Then every last item must be touched one more time and perhaps the memory treasured one more time.  Where does it end?
I do think that it is also a combination of weak cleaning discipline and clinical depression.  One overwhelms the other.
The real solution is the natural community and internal cleaning and storage discipline which over rides these tendencies.
..
How Cleaning Out My Hoarder Mother-in-Law’s Junk Caused My Own Marriage to Crumble

As we plowed through decades of her extreme clutter, I began to notice similar tendencies in my husband. And once I saw the hoarder in him, there was no turning back.


There’s a snapshot Aiden took of me a few days after our wedding on Christmas Eve, 2009. I’m standing outside his mother’s house wearing disposable coveralls, gloves, and a particulate mask. In the background is a dumpster. The ground is thick with dead, brown palm fronds. I am beaming at the camera.


I wished so much that I could have met Ruth, my mother in law. I knew she was a bright, adventurous woman who never found work to suit her lively intelligence. She was a 1960’s housewife fascinated by history and art and ideas. She loved dogs. She suffered from untreated depression and agoraphobia.


The day Ruth died, her family just locked up the house and walked away. Now, five years later, it’s still standing empty. Aiden worries about it. I worry about him. No one, I think, should have to clear out a parent’s house alone. His brothers are no help at all.


The front door opens into the living room — an ironic name for such an uninhabitable place. I’ve never seen anything like this. There are LPs, stained mattresses, mountains of canned food, ripped cushions, dog crates, and hundreds upon hundreds of boxes. All fading back into the darkness. The smell is beyond staleness or rot. It’s the stench of sickness, of time lost.


I’d fantasized about meeting my mother in law. Now I’m getting my wish, but in the most macabre way. As I dig through her belongings, I feel I’m excavating Ruth herself. Every room in that house — every pile of garbage, every broken sofa, every packed closet — seems saturated with her spirit. Each stratum we uncover reveals more of the woman who raised my husband — a woman whom I will otherwise never know.


I haven’t yet heard of obsessive-compulsive hoarding. I have no idea that there’s a clinical name for what I’m looking at. I only know that Ruth’s house feels like a map of a disturbed mind.


Why, I wonder, is the floor of the den covered in newspapers three feet deep?


“That’s for the dogs,” Aiden explains, as if it makes perfect sense. We start hacking the newspaper out, a job that requires pickaxes and shovels. Clouds of powdered filth fill the air. The whole thing is a petrified matt of paper, urine and excrement. Decades ago, Ruth crammed her ever-growing collection of dogs — eighteen? twenty? — into this single modest-sized room and left them to do their thing. When the floor got bad, she simply added another layer of paper. 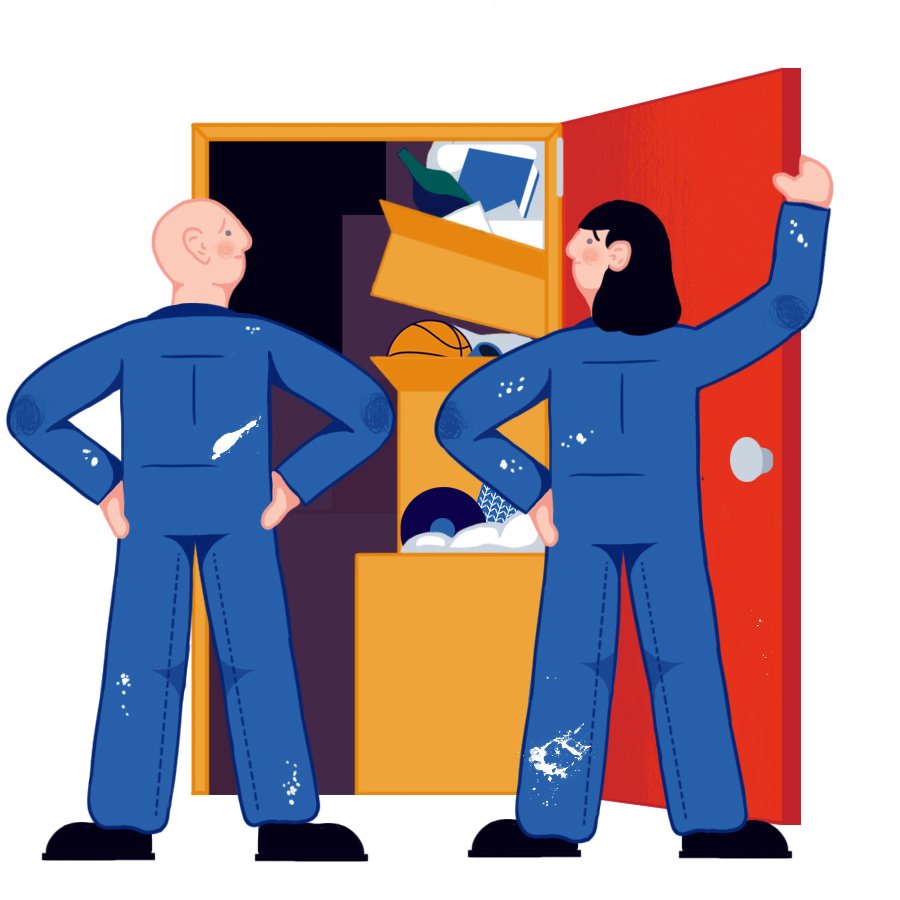 In another room, I find notebooks. Boxes of them, all densely crammed with faint, microscopic handwriting. They’re lists of words.


“Oh, Mom was always learning languages,” Aiden tells me. Some of the word-lists are in English. Others are in Spanish, German, Polish, Norwegian. Clearly the work of an intelligent and gifted person. The thing is, I can’t see anyone actually using them for anything. They’re barely legible. It’s as if Ruth was collecting words just for the sake of having them.


Further in, there’s a stack of maybe thirty cardboard boxes, wrapped in paper and swathed in packing tape. What was Ruth storing with such special care? Even with my mat knife, it takes a long time to get the first one open. I tear off the paper. Underneath there’s more tape. Then tissue paper. Gently, I turn back the layers.


Palm fronds. The box is full of dead palm fronds from the yard outside, carefully folded and packed.


I spend the next hour cutting open more boxes. They all contain more of the same. As I work, I keep twisting to glance behind me.


Back in the den I find Aiden crouched down, frowning at the heaps of crud that we’ve hacked out of the floor.


“We need to go through all this by hand,” he says earnestly.


“There could be something important buried here,” he says. “Get a bag.”


I get a bag. As I start sifting, I try to think of something to say. We can’t do this. We’ll never get through it all. This is crazy.


I pry up a wad of rat-chewed newsprint. Underneath, gazing up at me, are Aiden’s eyes.


It’s a photograph, half buried in the muck. It can’t be Aiden, though.


The picture is old, taken maybe around 1920. But the resemblance is eerie. Same curly brown hair, same beautiful eyes. The guy is obviously a relative. Aiden has no idea who he is.


Later on, we show the picture to Aiden’s dad. “That’s your Great Uncle Norman,” he says. “He had some problems.” Problems? Apparently, Ruth’s uncle committed suicide sometime before the Second World War.


I’m sorry to hear it. But what really disturbs me is the vision of my sweetie buried under a pile of garbage in that house. Those eyes, hidden down there for decades. Sad eyes. A genetic heritage. 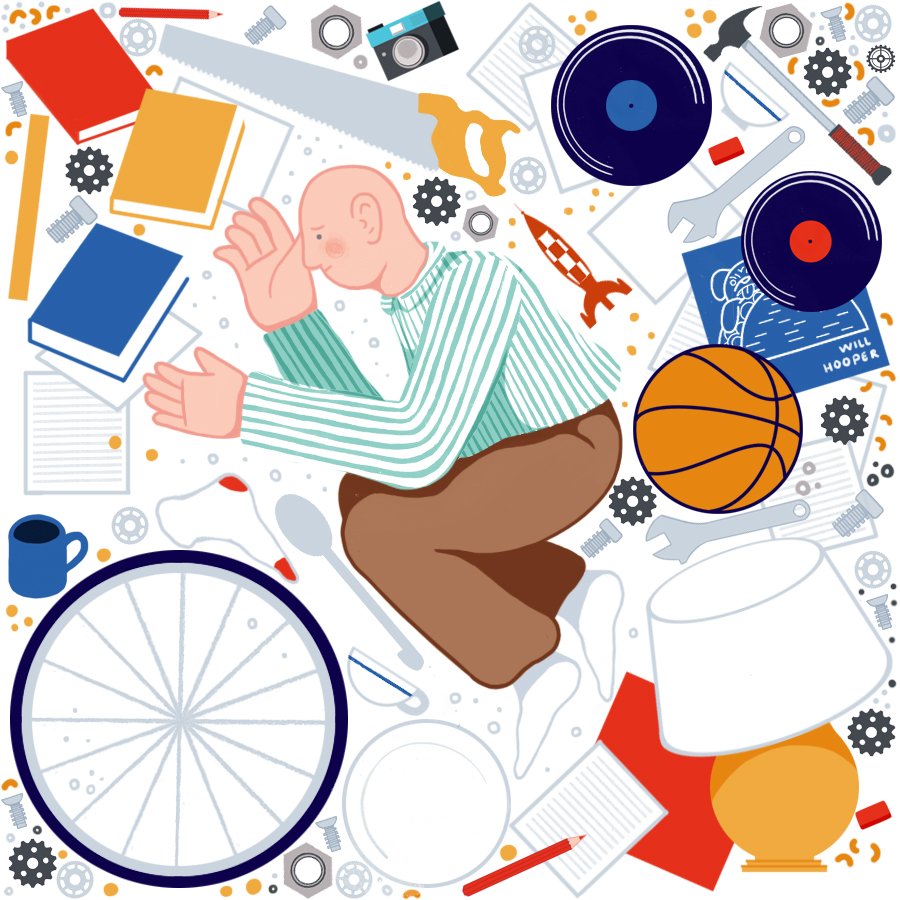 At the end of January, after about a month of excavation, we run out of time. The whole process has been traumatic for Aiden, and to what end? We’ve filled one corner of the dumpster, which means we’ve thrown away the equivalent of about one closet’s worth of stuff. The rest of the house we leave as it was, relocking the door behind us. I feel defeated. Aiden is silent.


Back in London, our cluttered apartment is starting to worry me.


“I’m remodeling, so everything’s kind of up in the air,” Aiden had told me months before, the first time I saw where he lived: before it became where we lived. I’d been impressed to learn that he was doing all the work himself. Naturally the place was messy now, I thought. I could see it was going to be beautiful when it was done.


But time passed, and the remodel began to seem like the labor of Sisyphus: a project that could absorb any amount of time and work without ever reaching completion.


Now we’ve returned from California and moved into a construction site. It’s uncomfortable. There’s no room for my stuff. Aiden urges patience as he keeps accumulating tools and crates and building materials salvaged from neighborhood trash cans. One night, I come home and am bewildered to see what looks like a pile of car parts in the living room.


I’m starting to understand that, for my husband, the chaos of the remodel is not a temporary stage on the way to a cozy shared living space. It’s the way he lives.


When I shake out a blanket, clouds of dust and mold fly up. We have fleabites. Without consulting me, Aiden adopts two dogs, which are never housebroken. Now I have to wear clogs all day, stepping over puddles on my way to the kitchen.


I offer to do all the cleaning myself. “This is not your project,” Aiden responds. I try to negotiate for one clutter-free room. For the first time, I see my husband truly furious. Once, I rearrange a couple of pictures on the wall. After that, Aiden doesn’t speak to me for a week. He feels that I’m a feckless control freak. I feel unwelcome and unvalued. Much as I love him, I’m sliding into chronic depression. Angry depression.


Through it all I can’t get Ruth, or her house, out of my mind.


Finally, two years later, our marriage ends. I’ve been fighting hard to clear away the obstacles — physical and emotional — that stand between us. To Aiden, I’ve realized at last, my efforts feel like an attack on the core of his being.


The hoarder crowds his life with rubbish in an effort to keep other things out of his life. Things like spontaneity, and the spiritual intimacy reflected in a shared living space. Love and friendship don’t stand a chance. The need to barricade oneself — literally and psychologically — overrides everything else.


I grieved our loss for a long time. But today I’m sitting in a tranquil room full of clean surfaces. There’s open space. There’s sunlight. I luxuriate in having exactly what I need and no more — my books, my teakwood desk, my glass pen jar. Best of all, my thoughts have room to spread and blossom.
Posted by arclein at 12:00 AM