This item is amusing.  It has been going on forever and will likely end up been a special brand when legalization arrives.

This does capture the history and that will someday be actively collected.

In a remote village almost 9,000 feet above sea level, a very old leaf is one of the only means to make a living. Their only problem: growing it is against the law.

Approximately 8,900 feet above sea level, perched high in the Himalayas among jagged snow-capped peaks, is a small Indian village overlooking a valley. It has a population of about 800 people and can only be reached on foot. It is a three-hour hike from a drivable road along a steep path up the mountain. Here, women give birth at home, and distances are calculated in hours spent walking. Medicine is made of plants, roots and cow urine; cooking is done on wood stoves; and the woods are used as an outhouse. There is no central market — just a few shops that sell soap, cigarettes, vegetables, rice and rubber galoshes. And in the mountains surrounding the village, ganja grows wild. 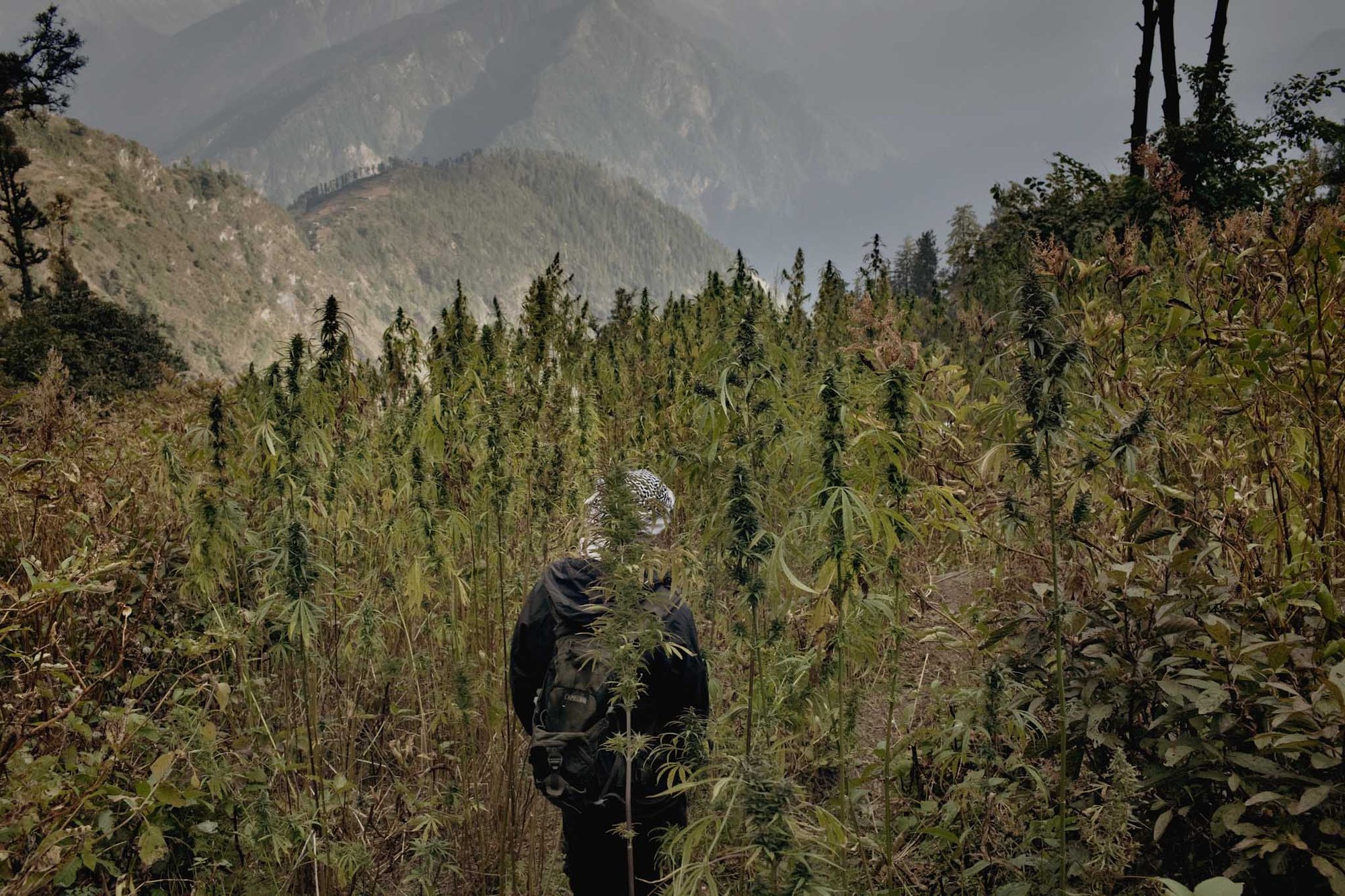 Suraj walks through tall stalks of ganja, (the Indian term for cannabis). His fields lie about 10,000 feet above sea level, on steep slopes and plateaus in the mountains, a long walk from the village.

The villagers say that a good season is when the police only show up once or twice with machetes and weed killer to destroy their cannabis crops. Twice is only a drop in the ocean: it’s almost impossible for the authorities to counter the illegal farming that takes place here. 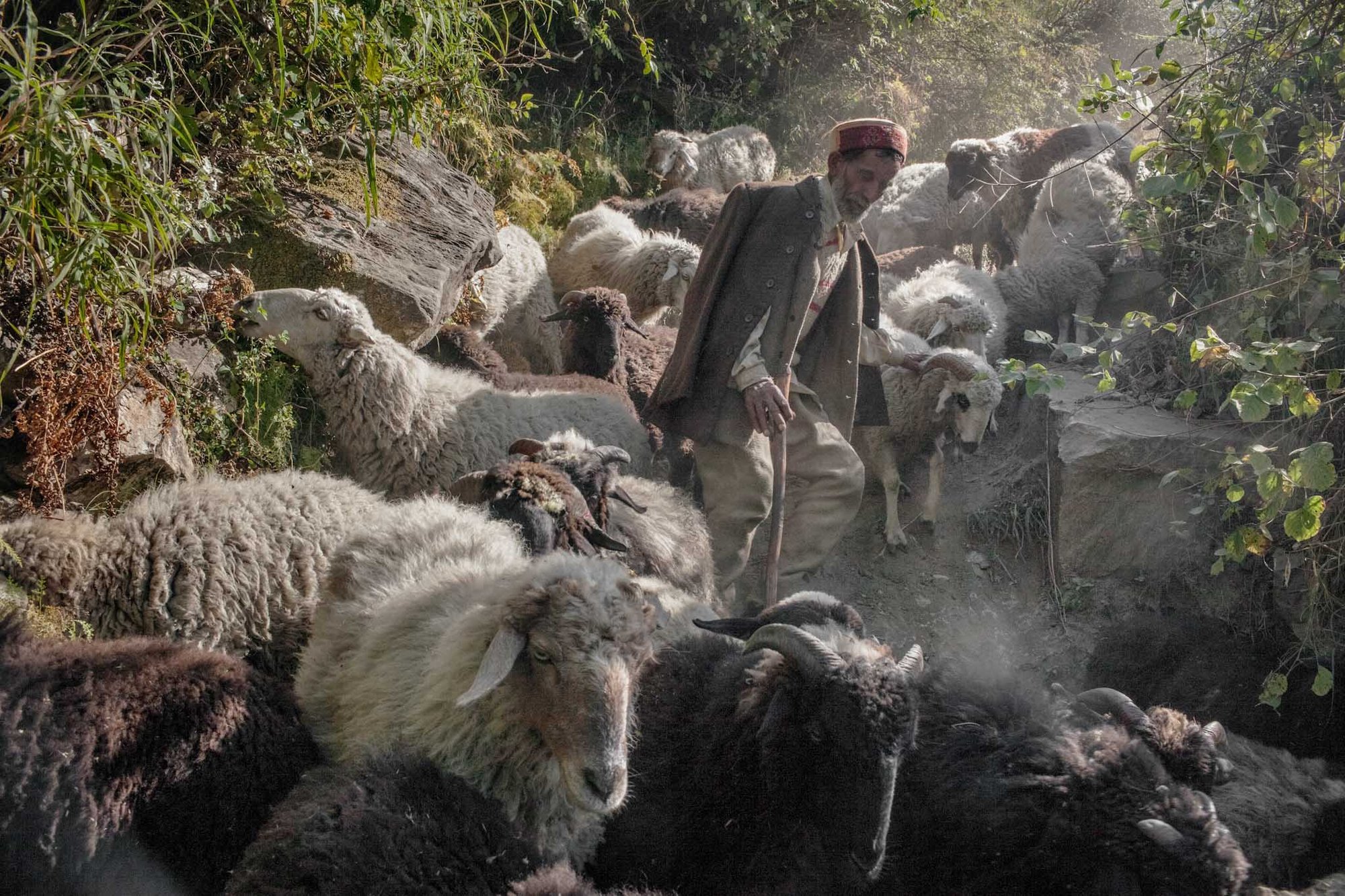 A shepherd walks his herd downhill as winter is approaching. It will take him up to three weeks to reach the valley, where he will wait until spring to go back.

Suraj, a local cannabis farmer in his mid-thirties (his name has been changed for his protection), was still a young boy when his father would take him down in the valley to herd their flock. Suraj disliked being a shepherd — sleeping outdoors and walking for weeks in the woods was never something he enjoyed. When his father died about 20 years ago, although job prospects are scarce and the large flock would have yielded a good return, Suraj decided to give up the sheep and cultivate his family’s land instead. 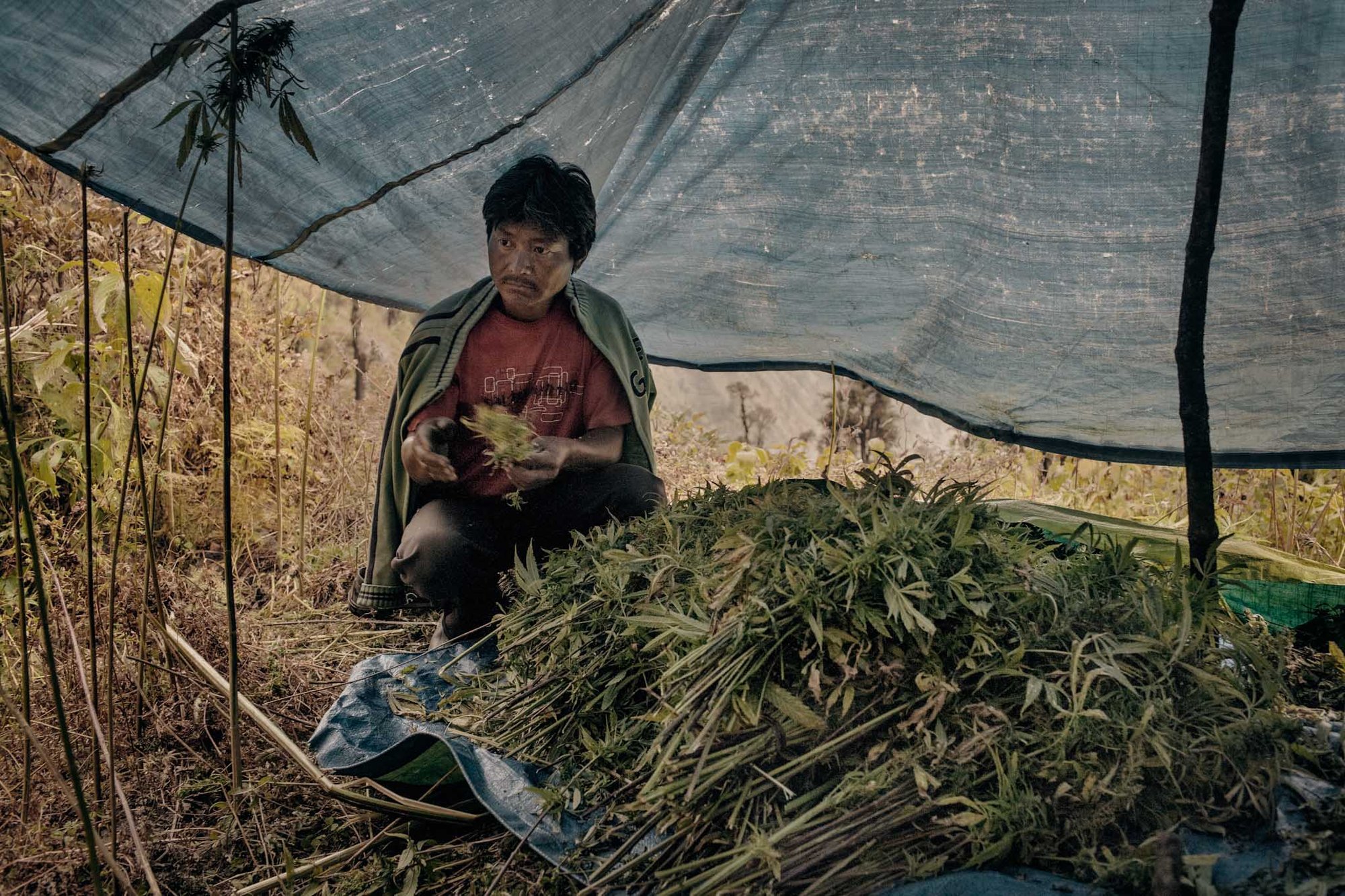 A Nepali worker rubs the strains of the live cannabis indica to make charas.

About half the citizens of this village, which will not be named in this article for the villagers’ protection against police retaliation, make their living by manually extracting a valuable resin, known as “charas,” from the live plants of cannabis indica, a flower that is native to India. It is a risky life that Suraj lives, making money in a country where marijuana use is widespread and tolerated, but its cultivation is illegal. 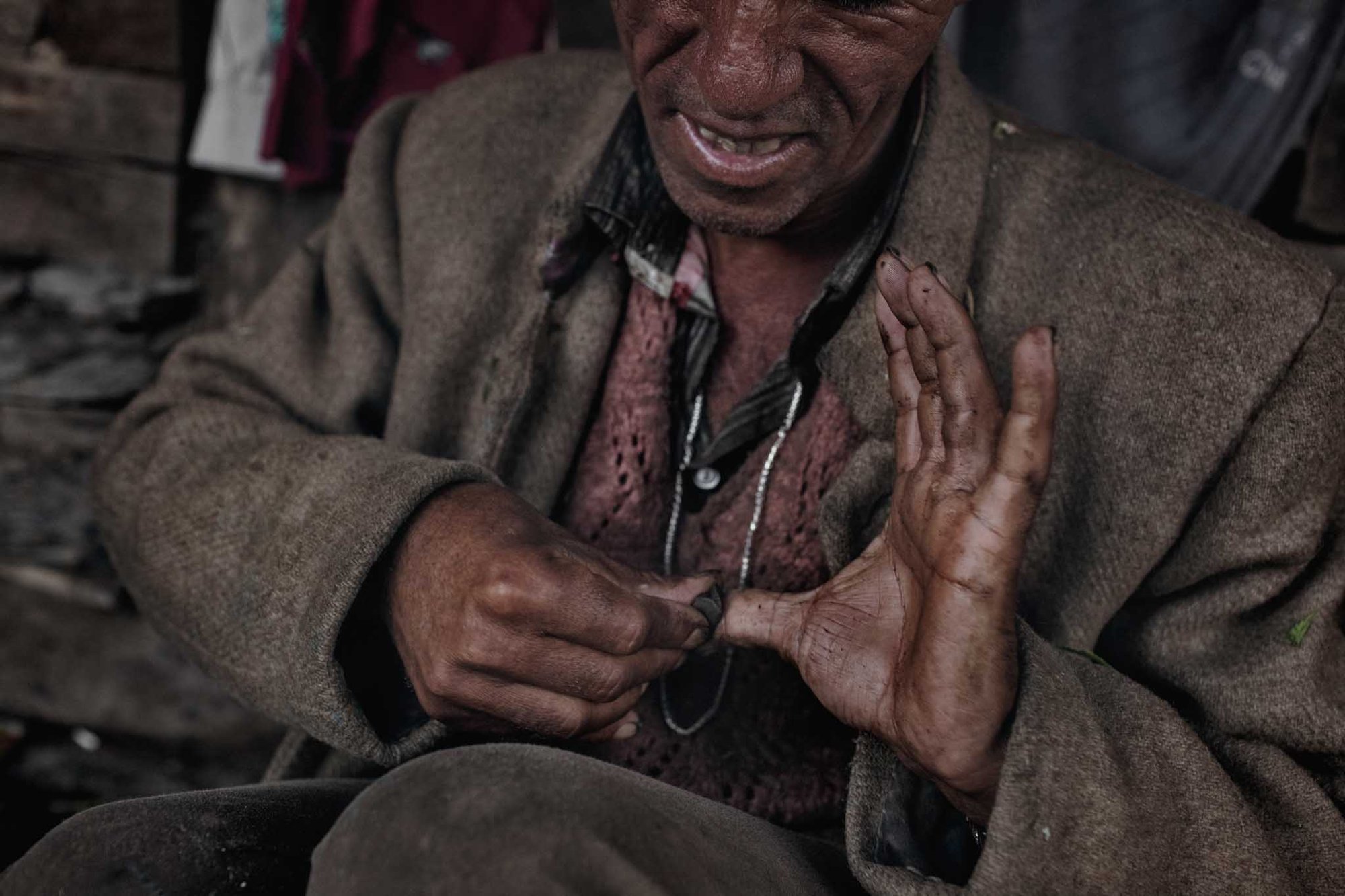 A local man picks off the charas he just rubbed in his hands. The process of producing charas, compared to the more widely used technique of “beating” and “filtering” dry plants to produce other types of hashish, takes more time, but produces higher quality resin.

In the 1970s India became a popular tourist destination for Westerners leading an anti-conformist lifestyle. They arrived on overloaded busses all the way from Europe to camp on Goa’s beaches in the South. They traveled to the Himalayas, following the Hindu holy men, or babas, on mystical, spiritual paths. Eventually, the “hippies” arrived in Suraj’s village. “Children up in the Himalayan villages still refer to tourists as ‘hippies,’” says Suraj, a smile breaking over his face. “It is the only word they know for stranger.” 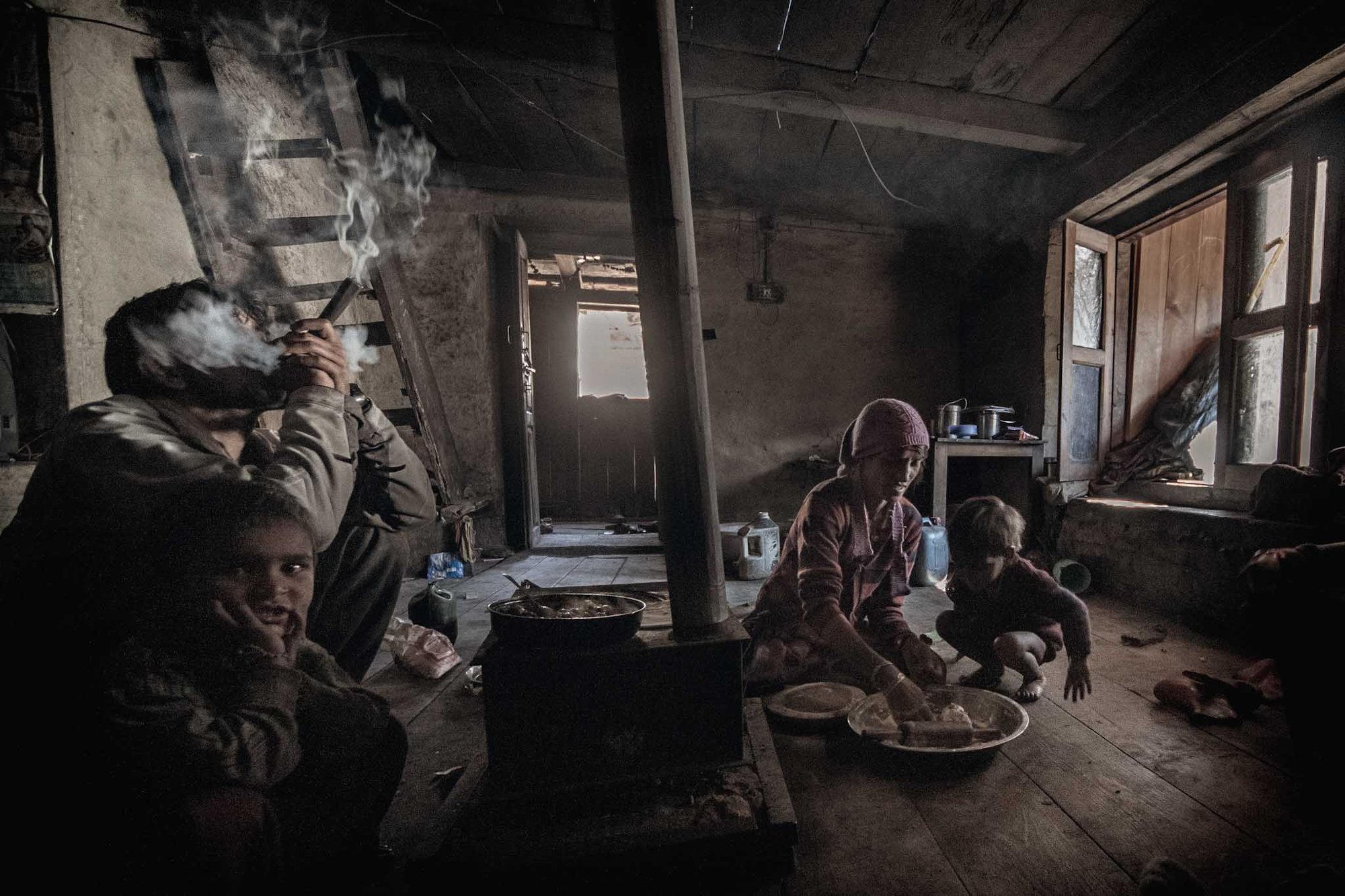 A man smoking a chillum, the traditional pipe for charas, surrounded by his family.

Hindu monks from all over India go to the Himalayas to meditate, leading an ascetic lifestyle, traveling from one holy place to another, surviving on alms. Back in the ’70s, the locals were already smoking pot, but it was the monks who first perfected the technique of making charas from the live plants. Both the locals and the hippies began imitating them, rubbing the big strains in their hands to extract the shiny resin, and the technique caught on. Today, this same practice is used to produce large amounts of charas each year. 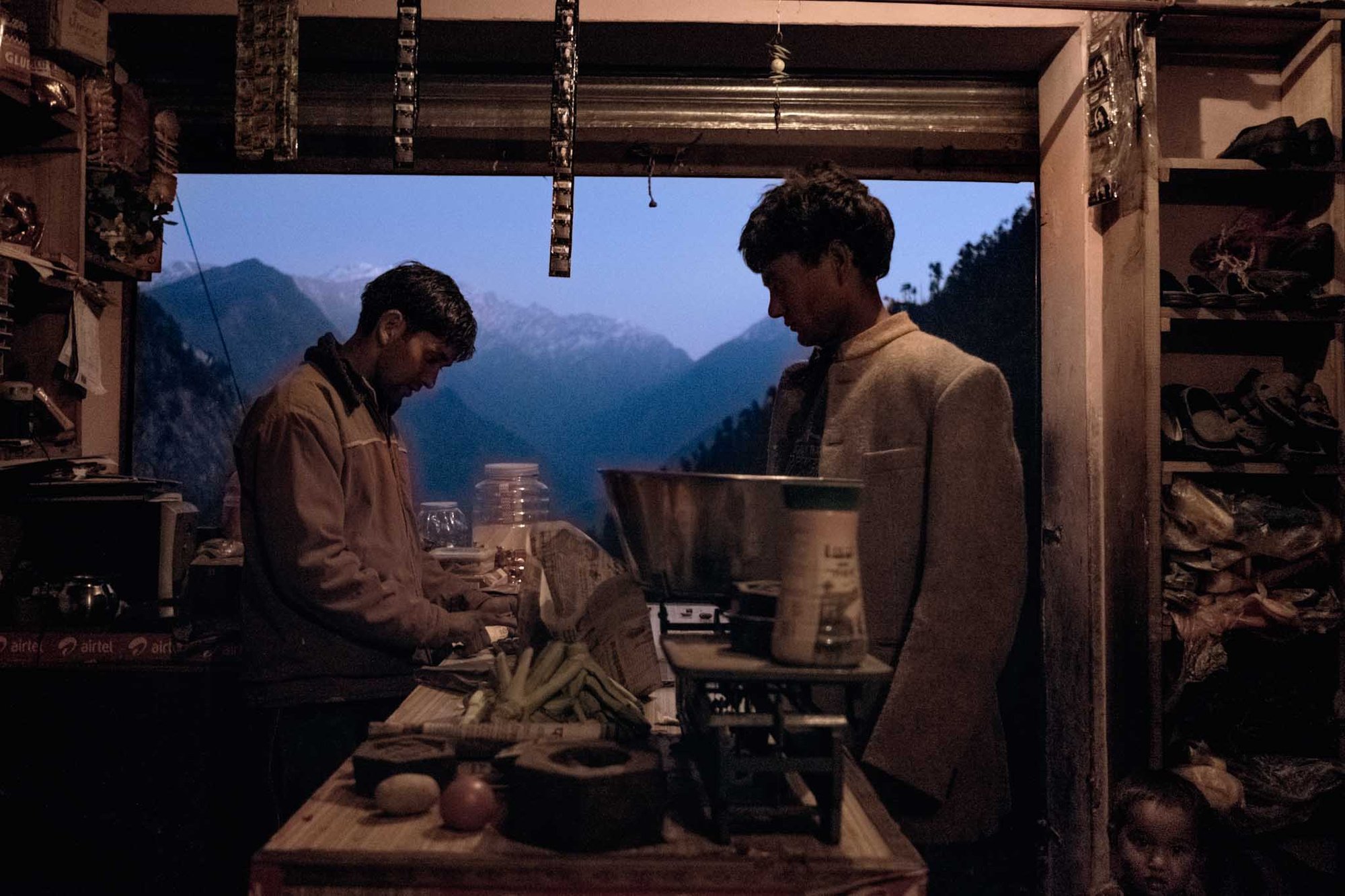 The view of the snow capped mountains from one of the few shops of the village, which sells basic groceries.

Suraj, who learned to make charas from a French man, sells his product to foreigners — Israelis and Europeans mainly, but also more and more to wealthy students from Delhi and Mumbai. The demand is steadily rising, and more fields are converted to cannabis each year. The valley, with its guesthouses packed with backpackers every spring, has become something of an “Amsterdam of the East.”

Business is on the rise — peasants now prefer it to apples or beans, as it is clearly more profitable. Cement is slowly replacing the stone, wood and cow dung of which houses in the village were built. 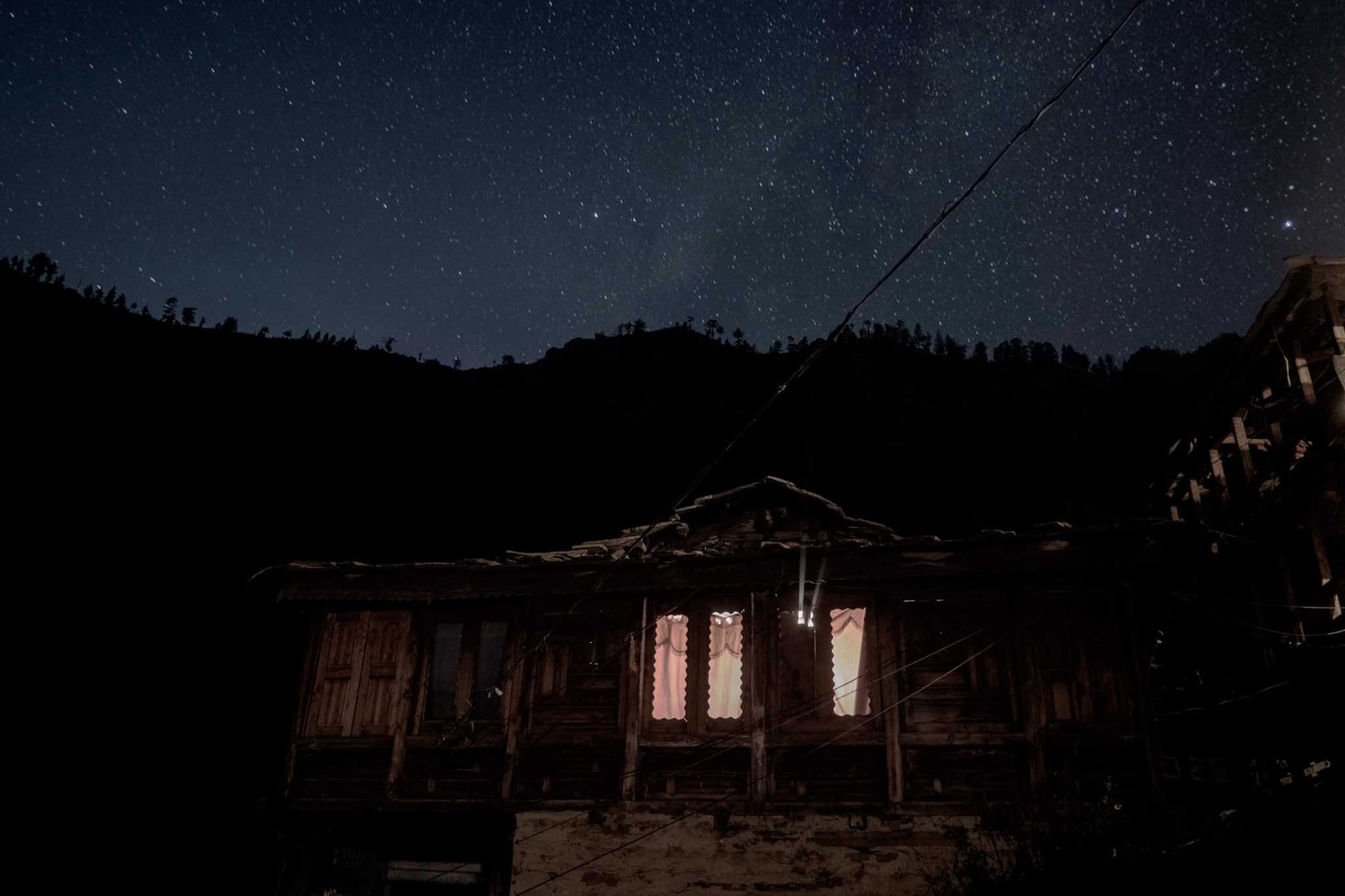 A village house made in the traditional local style is lit with a feeble light under the starry sky of the Himalayas.

Cannabis indica grows in many parts of India, particularly in the Himalayas, making it difficult for the authorities to trace the producers, who have been planting their fields at higher and higher altitudes to escape police raids. In addition to this, policing and trafficking mechanisms are bypassed through widespread corruption at all levels; thousands of families survive on the illegal production of charas with few legal problems. However, although the precious resin can cost up to 20 euro per gram in Europe, cannabis farmers retain only minimal profit margins. Dealers and traffickers make the biggest profit from the illegal business, while farmers are forced to operate in the shadows. Moreover, they risk a minimum sentence of 10 years if caught cultivating cannabis or trafficking large quantities of charas, and can be sentenced to death for repeated offenses. 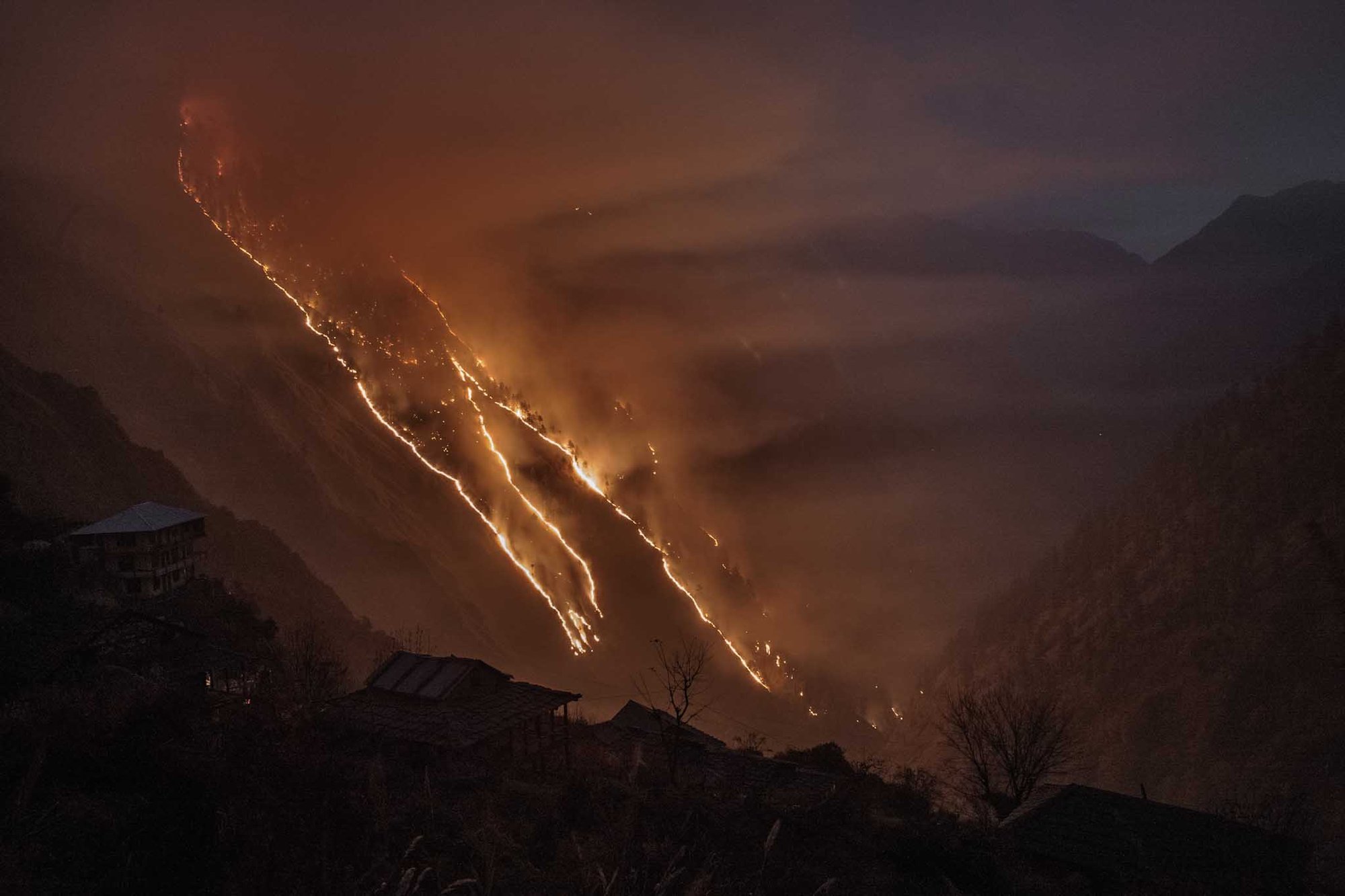 Stripes of fire burn the mountain next to the village in one of the biggest blazes in years. Fires are common at the end of the dry season; this one was exceptionally large.

In 1961, when India signed the cornerstone treaty of the UN drug control system—known as the Single Convention on Narcotic Drugs, which criminalized the use and cultivation of marijuana in participating countries—Indian society did not actually seem ready to abandon the use of cannabis, which dates back to sacred Veda texts and has been part of Hindu rituals and festivities for centuries. In 1985 India passed the controversial Act on Narcotic and Psychotropic Substances (NDPS), which criminalized cannabis like hard drugs but failed to actually combat production and trafficking. Along with prices, production and trafficking exploded as a reaction to the increasing demand on the international market. 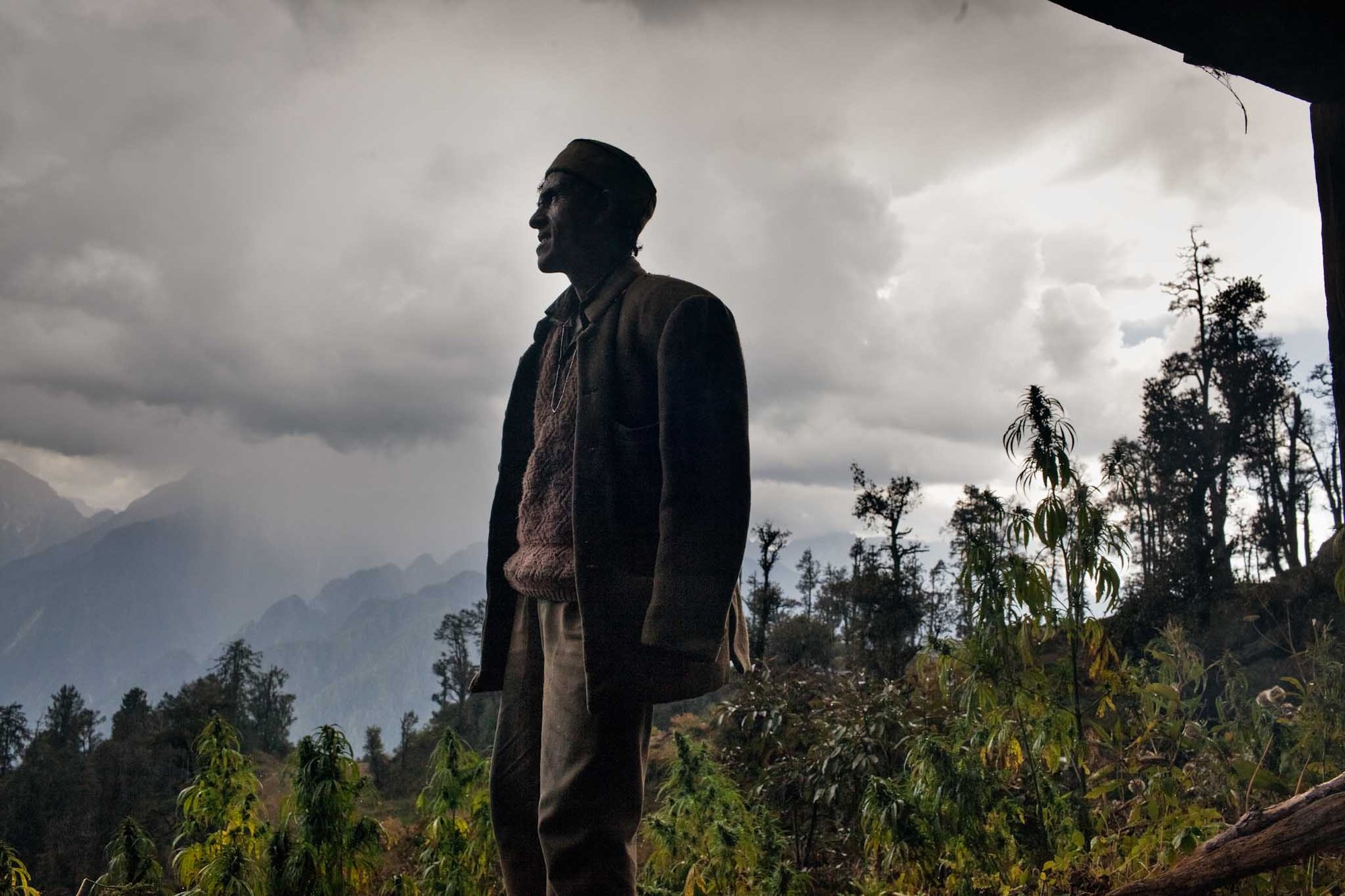 A farmer stares over the mountains and above a cloudy sky after the rainfall has disrupted his work.

“The obligation to eliminate cannabis in countries where there was widespread traditional use is a clear example of the colonial background of the Convention, and a violation of indigenous and religious rights. It would have never passed nowadays,” says Tom Blickman of the Dutch think tank Transnational Institute (TNI). “The NDPS effect has been the criminalization of cannabis consumers and producers, in a country where its use — for medicinal, spiritual and recreational purposes — is millennial. It was also obvious that cannabis eradication would have been impossible.” 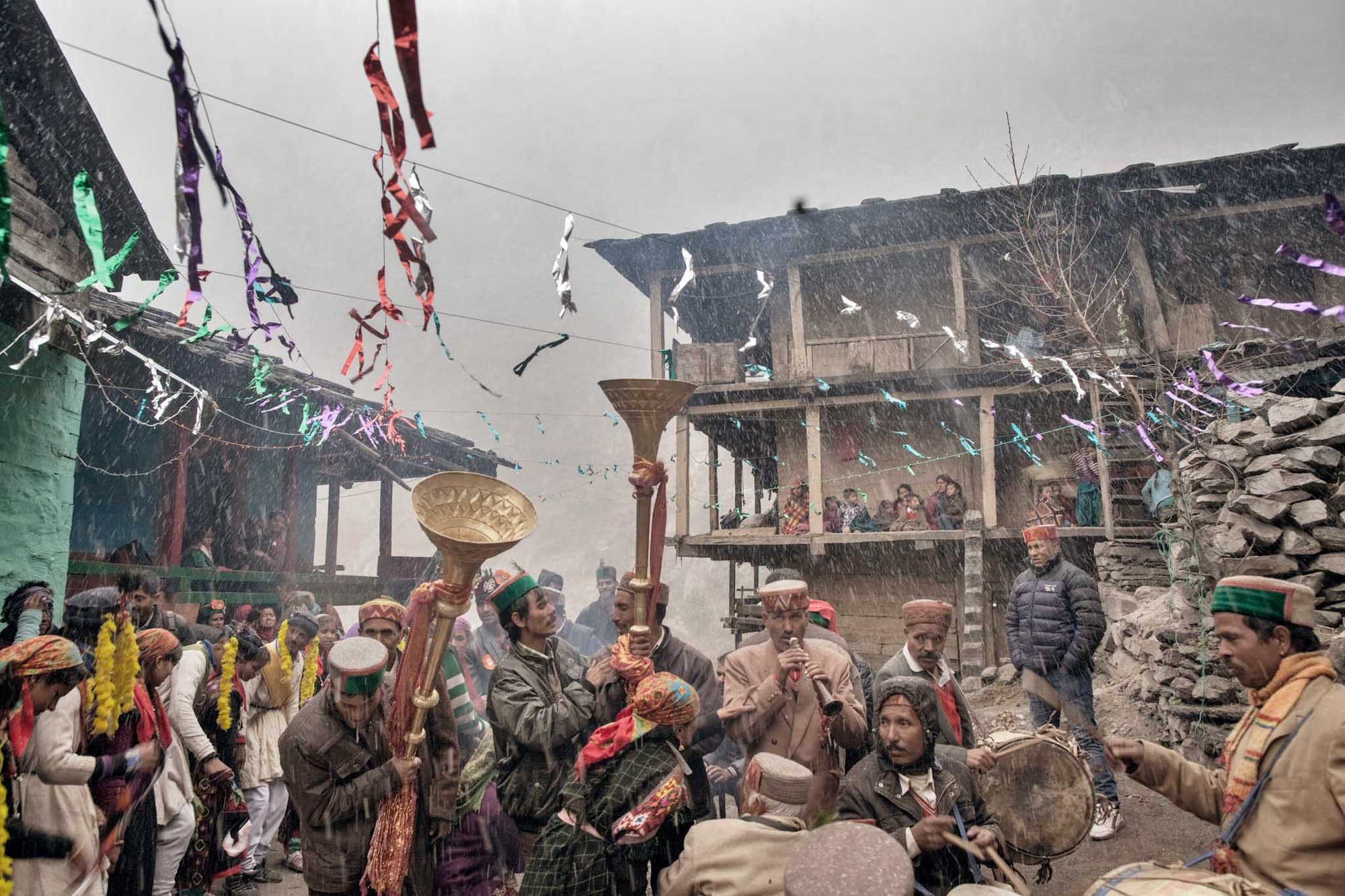 Despite the snow and chilling cold, singing and dancing goes on in the village square on the occasion of a wedding.

“Before the ban, cannabis in India was regulated as it is today in some states in the U.S.”, says Blickman, referring to it as “a system of cultivation, production and sale regulated by licenses and taxes.” But the debate on legalization is still a taboo in India, and despite the plant being so widespread, there are no precise estimates on the amount of cultivation and resin production. India has never conducted an accurate survey — not even for the purposes of providing statistics to the United Nations Office on Drugs and Crime, which tends to have the strongest grasp of drug statistics around the world. 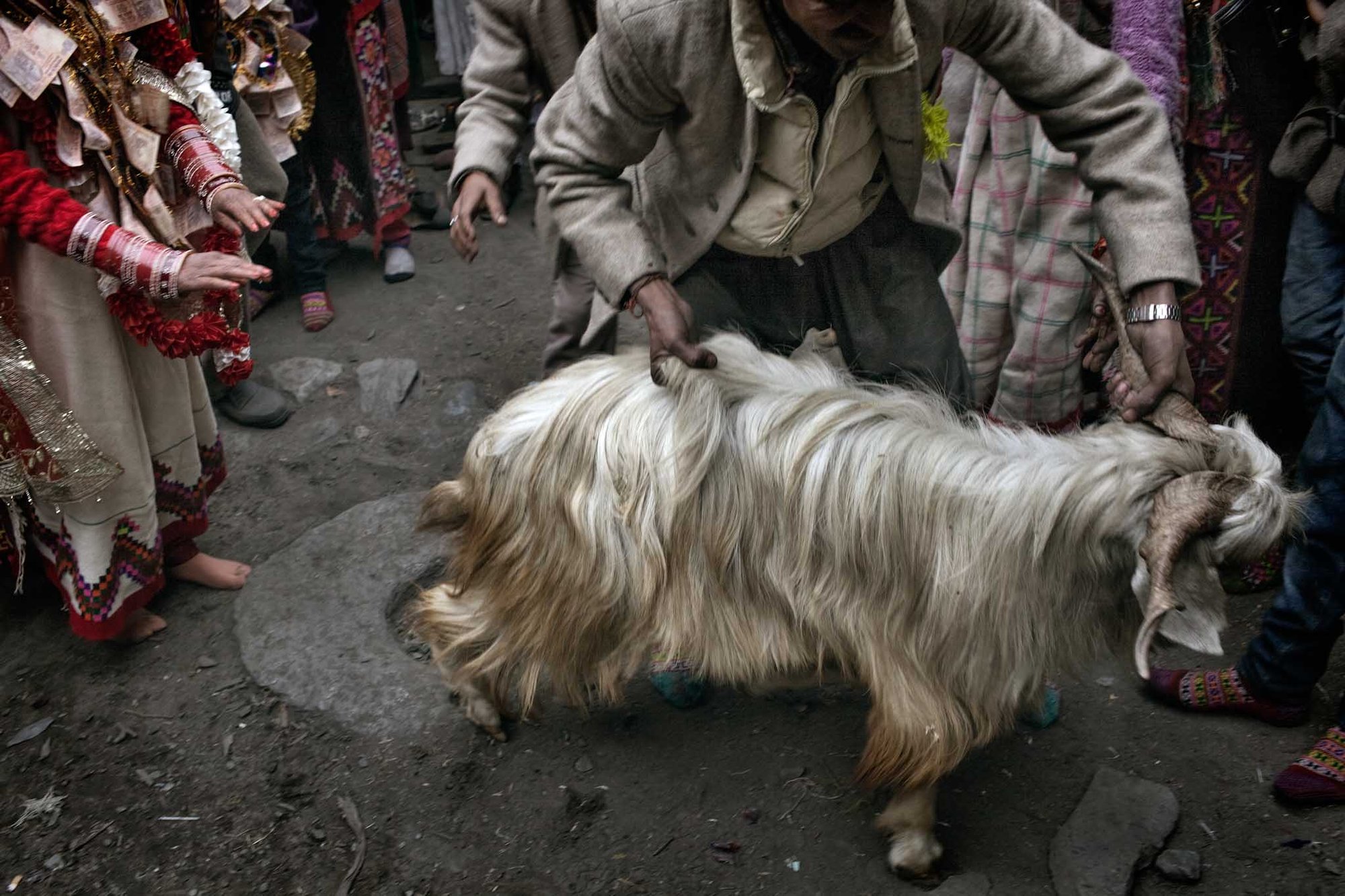 A sacrificial goat tries to escape during a wedding; on the left, the bride, wearing traditional wedding bracelets, is surrounded by the relatives.

“Cannabis grows wild in nearly 400 out of the 640 districts in India,” says Romesh Bhattacharji, a former narcotics officer in India and one of the most authoritative voices promoting the revival of a debate over legalization in the country. “The 1961 Single Convention is an unnecessarily severe and falsely optimistic treaty,” he says. “It is on this fragile basis that the NDPS, our draconian legislation on narcotics, was conceived. Since then, illegal trafficking and addiction have only increased.” 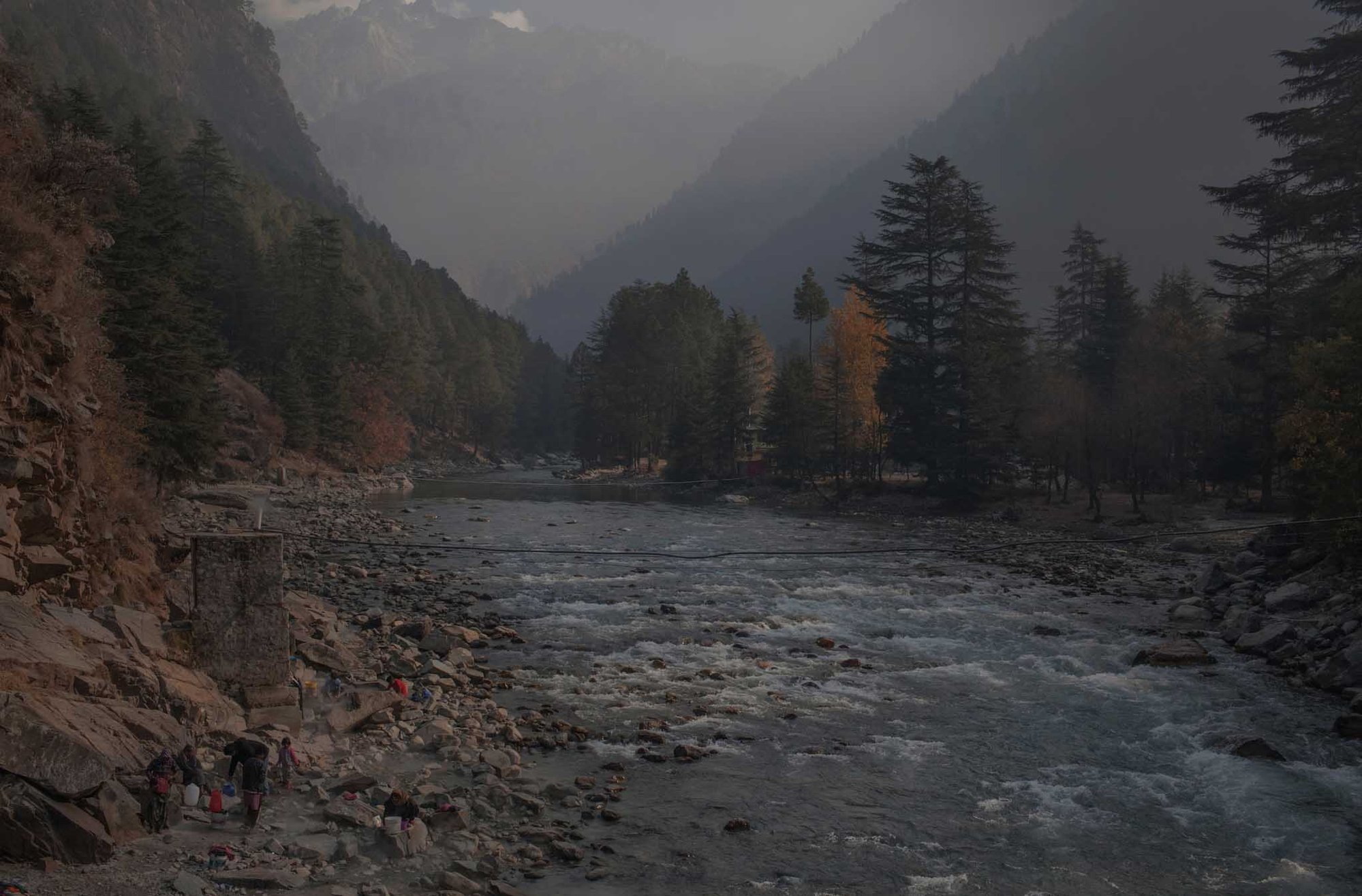 The river that flows through the valley is named after a Hindu goddess (whose name is withheld in this article to protect the local farmers from police retaliation), an indication of the huge role that religion plays in the valley, and in the lives of the villagers. 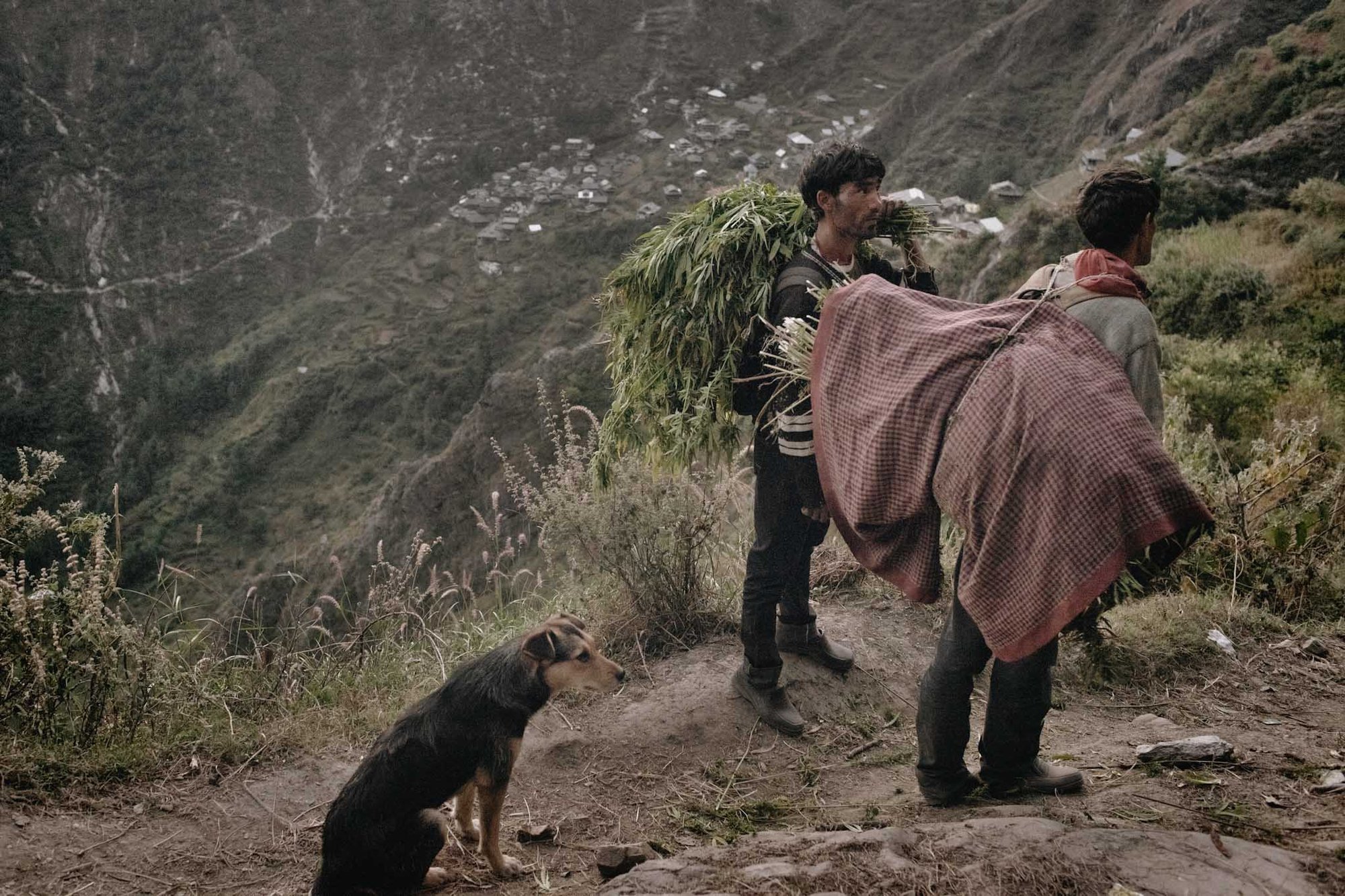 Two men carry loads of freshly cut cannabis bundles uphill from the fields, which are a several hours’ walk from their homes. They’ll rub them to make charas later at home. 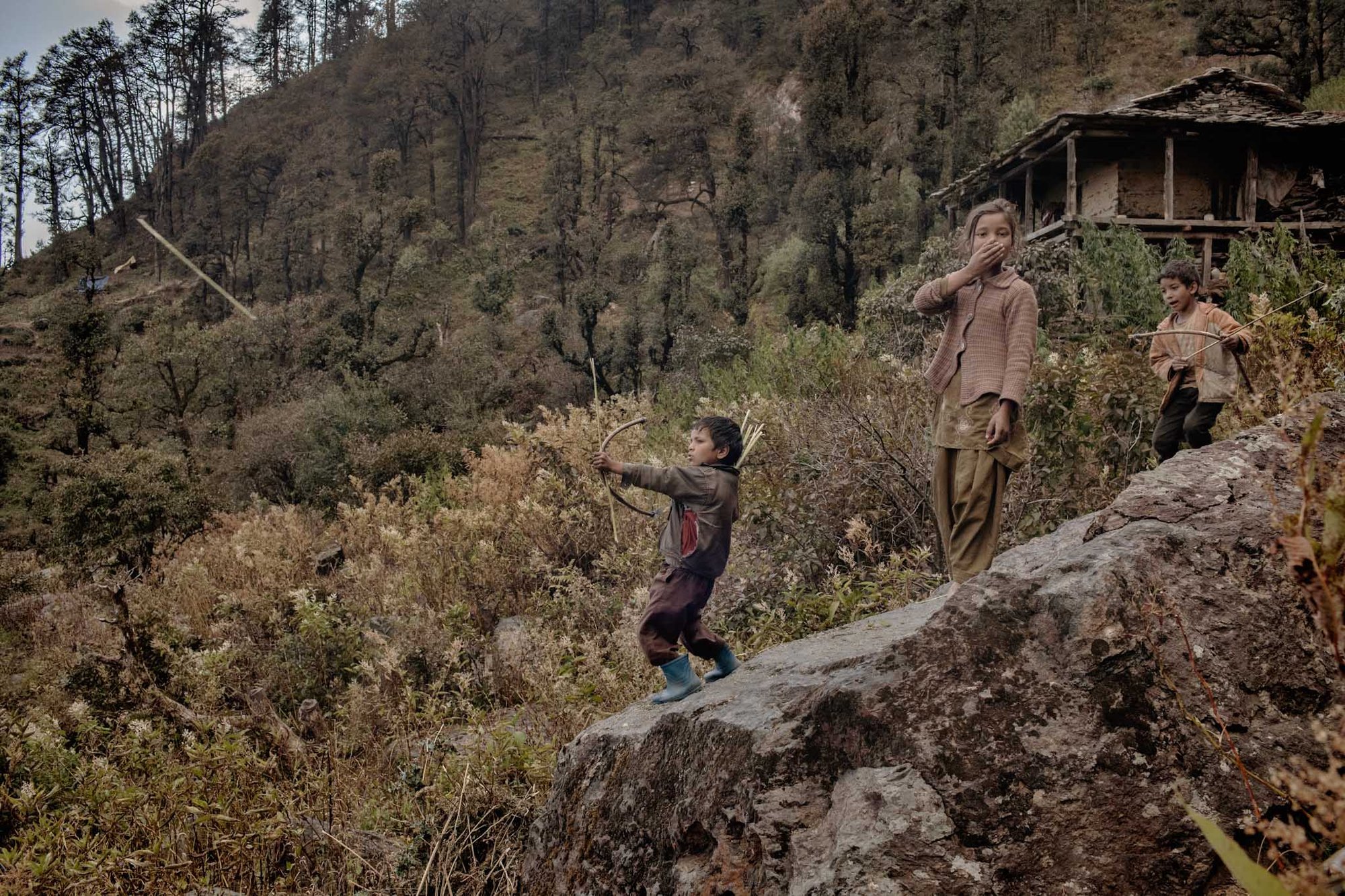 A group of children play near the fields with bows and arrows made out of cannabis stalk. They hang around the fields while their parents are harvesting. 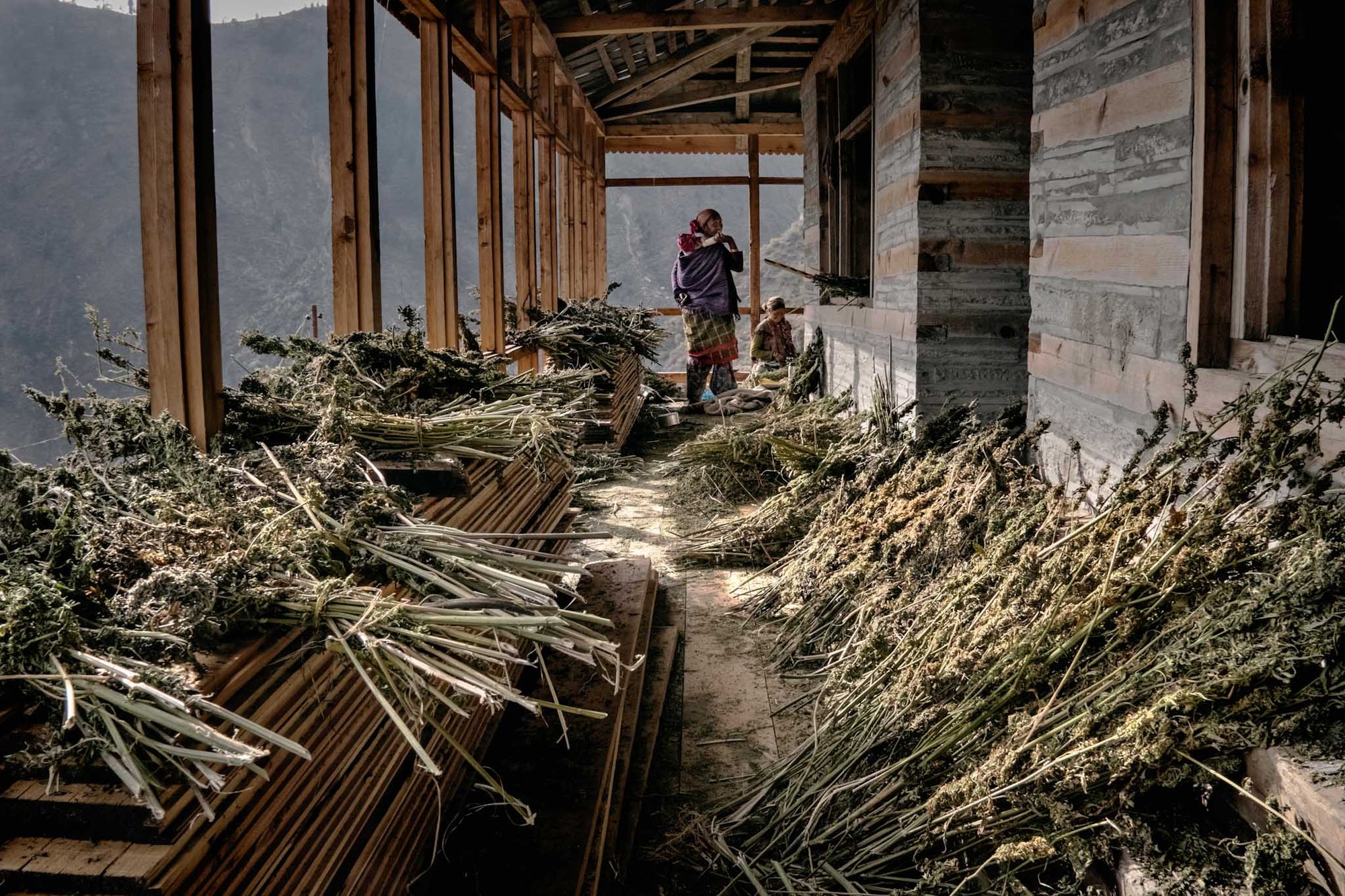 A farmer’s family works in the house, where they collect dry plants they did not manage to rub before snow came. They will be used to produce another kind of hashish. 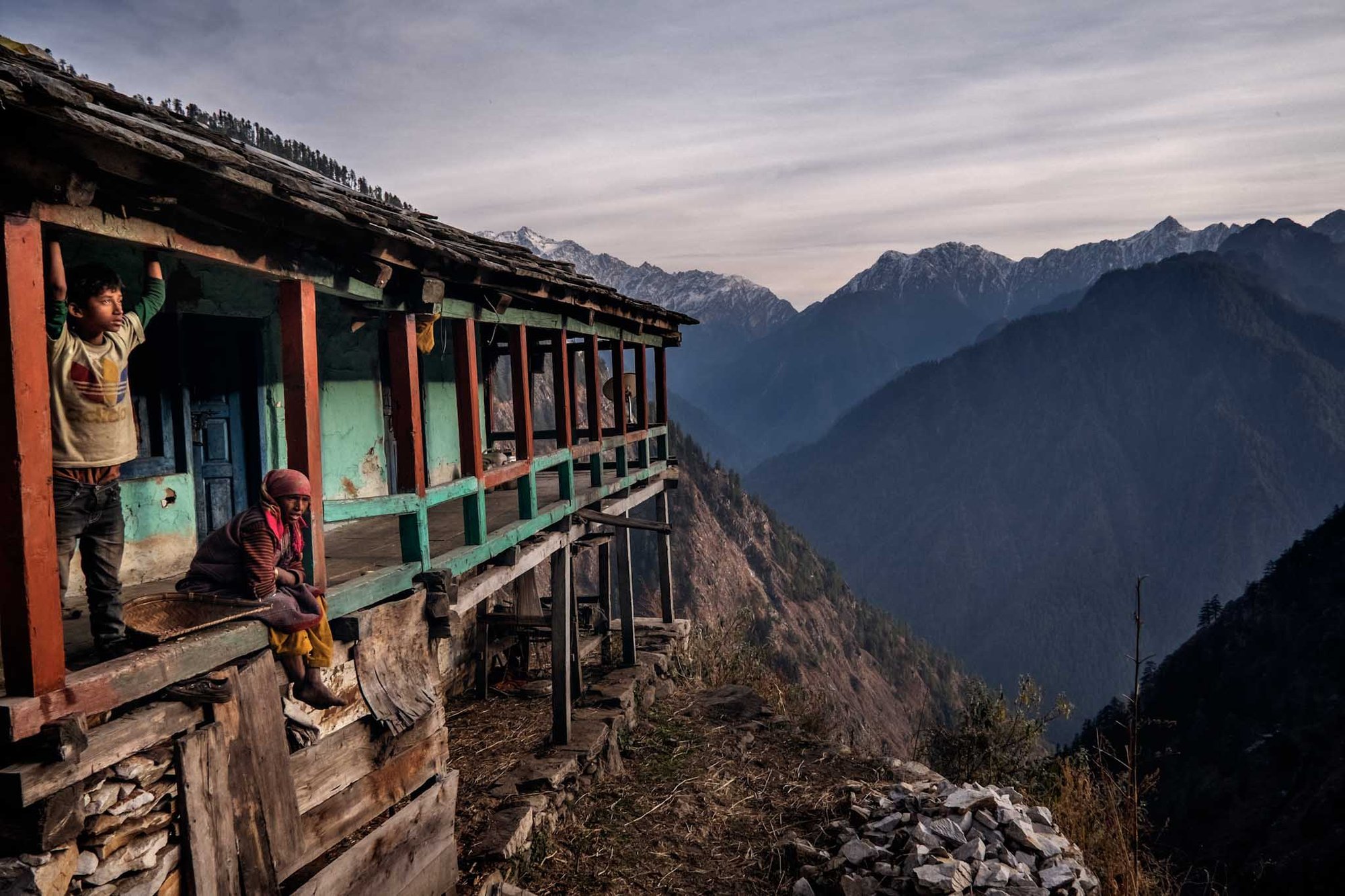 A boy looks out over the valley from the wooden balcony of his family home at the end of the harvesting season.

Maria Tavernini is an Italian freelance journalist, writer and sailor, currently based in New Delhi.
Posted by arclein at 12:00 AM