This Fungus Could Wipe Out Bananas as We Know Them 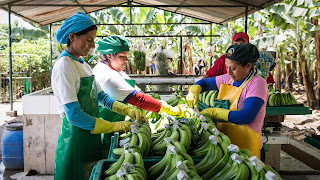 The good news is that research is well underway to replace the Cavendish  variety.  With modern methods this will be quickly resolved.

We will still see these stories for a while.

The more is is promoted, the more new varieties that will be developed which is overdue anyway.
.

This Fungus Could Wipe Out Bananas as We Know Them

By Gideon Long and Emiko Terazono

Latin America’s plantations are the source of two-thirds of the global banana trade.

The world’s biggest banana exporters have a serious problem.

A deadly fungus that threatens the future of the banana has reached Latin America, the leading exporter of the fruit to world markets.


The Colombia Agricultural Institute (ICA) has confirmed the arrival of Panama tropical race 4 (TR4), a soil-dwelling fungus that has devastated banana plantations in Southeast Asia over the past 30 years. The agency has declared a national emergency over the disease, which threatens the Cavendish banana.

The fungus threatens 95 percent of the world’s banana exports.

“The first landing of TR4 in Latin America is a very serious issue. It is a disease that is very difficult to control and to manage,” says Gert Kema, a leading banana expert and the head of tropical phytopathology at Wageningen University in the Netherlands who was part of the team that analyzed the banana plants from Colombia.

The fungus doesn’t affect humans, but infected plants stop producing fruit. Spreading through soil movement, which is typically caused by workers and machinery, TR4 has destroyed plantations in Asia, Africa and the Middle East. The disease was first detected in Colombia in June in the far northeast province of La Guajira.


In response, Colombia has increased sanitary controls at all ports, airports and border points. The ICA says it has eradicated plants in an area encompassing nearly 420 acres of quarantined plantations, adding: “The current challenge is to work on containment in La Guajira.”

Banana exports are an important source of revenue for many Latin American countries. Colombia is the region’s fourth-largest exporter of the fruit, behind Ecuador, which supplies more than a quarter of total exports, Costa Rica and Guatemala. Bananas are Colombia’s third-largest agricultural export.

The Cavendish variety is based on a single genetic clone, which means that it is vulnerable to epidemics. Before the Cavendish became the dominant variety, the Gros Michel was the most widely eaten banana. It was wiped out in the 1950s by the first strain of Panama disease.

While improved varieties of many fruit and vegetables are continually introduced, the banana industry has relied on the Cavendish with virtually no research and development going into new varieties until recently, according to plant experts.

If Latin America’s Cavendish banana plantations are destroyed, there is nowhere international fruit suppliers can turn to, says Kema: “We’re confronted with the fact that there is nothing [that can] replace [the Cavendish yet].”

At present, there is no effective treatment for Panama disease once it has infected a banana plant. Researchers are trying to speed up the breeding program to create a resistant variety with the taste and quality that consumers will accept — but, Kema warns, this will take at least five to six years.

Others are working on genetically modified versions of bananas and plantains, while Tropic Biosciences, an agritech startup based in the United Kingdom, aims to use new gene-editing techniques to develop a banana resistant to Panama disease.
Posted by arclein at 12:00 AM