How do people learn to cook a poisonous plant safely? 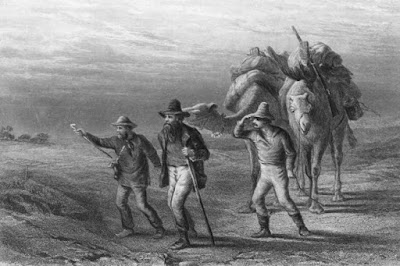 This is important. The principle difference with core human cognition with other animals including our closest primate cousins is that we are persistent imitators.

This has never been particularly obvious so it has never been investigated.  That difference is just enough to explain our successful accumulation of successful protocols as the long term construction of a culture.

An accumulation of learned practice which is imitation plus a similar accumulation  of data then processed through cognition nicely explains human intelligence.  Throw in a robust time window of course.

How do people learn to cook a poisonous plant safely?

By Tim Harford Presenter, 50 Things That Made the Modern Economy

In 1860, Robert Burke and William Wills famously led the first European expedition across the largely unknown interior of Australia.

It did not go well. Due to a combination of poor leadership, bad planning and misfortune, Burke, Wills and their companion John King ran out of food on the return journey.

They became stranded at a stream called Cooper's Creek, having found no way to carry enough water to cross a stretch of desert to the nearest colonial outpost at the unpromisingly named Mount Hopeless.

"We have been unable to leave the creek," wrote Wills. "Both camels are dead and our provisions are done. We are trying to live the best way we can."

The local Yandruwandha people seemed to thrive despite the conditions that were proving so tough for Wills's party.

The Yandruwandha gave the explorers cakes made from the crushed seed pods of a clover-like fern called nardoo.

Nardoo - seen floating here in the foreground - is a type of fern which is native to Australia Burke then fell out with them and, unwisely, drove them away by firing his pistol.

But perhaps the trio had already learned enough to survive? They found fresh nardoo and decided to make their own cakes. At first, all seemed well. The nardoo cakes satisfied their appetites, yet they felt ever weaker.

Within a week, Wills and Burke were dead. It turns out that safely preparing nardoo is a complex process.

Nardoo, a type of fern, is packed with an enzyme called thiaminase, which is toxic to the human body. Thiaminase breaks down the body's supply of Vitamin B1, which prevents the body using the nutrients in food.

Burke, Wills and King were full, but starving.

The Yandruwandha roasted the nardoo spores, ground the flour with water, and exposed the cakes to ash, each step making the thiaminase less toxic. It is not something one learns to do by chance.

Barely alive, King threw himself on the mercy of the Yandruwandha, who kept him alive until European help arrived months later. He was the only member of the expedition who survived.

As a foodstuff, nardoo is a curiosity.

The same cannot be said of cassava roots, which are a vital source of calories in many tropical countries, particularly for subsistence farmers in Africa.

But like nardoo, cassava is highly toxic. It also requires a tedious and complex preparation ritual to make it safe. The cassava root will otherwise release hydrogen cyanide.

What makes cassava particularly treacherous is that some processing will reduce the bitter taste and the risk of immediate cyanide poisoning.

However, only the full, time-consuming ritual can guarantee that you will not be slowly poisoned, and develop a condition called Konzo, with symptoms including sudden paralysis of the legs.

But in 1981, in Nampula in Mozambique, a young Swedish doctor named Hans Rosling knew none of this. As a result, the situation he faced was deeply puzzling.

More and more people were coming to his clinic suffering from paralysis in their legs. Could it be an outbreak of polio? No. The symptoms were not in any textbook.

Image copyright Thorkild Tylleskar Image caption A boy with Konzo, photographed in Zaire in September 1986 With Mozambique slipping into a civil war, might it be chemical weapons?

He packed his wife Agneta and young children off to safety and continued his investigations.

It was Dr Rosling's colleague, the epidemiologist Julie Cliff, who eventually figured out what was happening.

Their meals of cassava had been incompletely processed. Already hungry and malnourished, they could not wait long enough to make the cassava safe. And as a result, they developed Konzo.

Toxic plants are everywhere. Sometimes simple cooking processes are enough to make them edible. But how does anyone learn the elaborate preparation needed for cassava or nardoo?

No single person does, according to Joseph Henrich, an evolutionary biologist.

He argues this knowledge is cultural. Our cultures evolve though a process of trial and error analogous to evolution in biological species. Like biological evolution, cultural evolution can - given enough time - produce impressively sophisticated results.

Somebody stumbles on one step that seems to make cassava less risky; that spreads and another step is discovered. Over time, complex rituals can evolve, each slightly more effective than the last.

In South America, where humans have eaten cassava for thousands of years, tribes have learned the many steps needed to detoxify it completely: scrape, grate, wash, boil the liquid, leave the solid to stand for two days, then bake.

Ask why they do this, and they will not mention hydrogen cyanide. They will simply say "this is our culture".

In Africa, cassava was introduced only in the 17th Century. It did not come with an instruction manual. Cyanide poisoning is still an occasional problem; people take shortcuts because cultural learning is still incomplete.

Henrich argues that cultural evolution is often much smarter than we are.

Whether it is constructing an igloo, hunting an antelope, lighting a fire, making a longbow or processing cassava, we learn not by understanding from first principles, but by imitating.

One study challenged participants to place weights on the spokes of a wheel to maximise the speed at which it rolled down a slope. Each person's best effort would be passed to the next person.

Because they benefited from earlier experiments, later participants did much better. Yet when asked, they showed no sign of actually understanding why some wheels rolled faster than others.

Further studies show that the verb to ape, meaning to copy, is ironically misplaced: the only ape with the instinct to imitate is us.

Tests reveal two-and-a-half year-old chimps and humans have similar mental capacities - unless the challenge is to learn by copying someone. The toddlers are vastly better at copying than the chimps.

And humans ritualistically copy in a way that chimps do not. Psychologists call this over-imitation.

It may seem like the chimps are the smart ones here. But if you are processing cassava roots, over-imitation is exactly what you should be doing.

If Henrich is right, human civilisation is based less on raw intelligence than on a highly-developed ability to learn from each other.

Over the generations our ancestors accumulated useful ideas by trial and error, and the next generation simply copied them.

No doubt some less useful ideas were mixed in with them, like the need for a ritual dance to make the rains come, or the conviction that sacrificing a goat will persuade the volcano not to erupt.

But overall we apparently did better by copying without question than by assuming, like the chimps, that we were smart enough to tell which steps we could safely ignore.

Of course cultural evolution can take us only so far. Now we have the scientific method to tell us that, yes, we really do need to leave the cassava for two days, but, no, the volcano does not care about the goats.

When we understand from first principles, we can make progress more quickly than by trial and error and imitation. But we should not look down on the kind of collective intelligence that saved King's life.

It is what made civilisation - and a functioning economy - possible.
Posted by arclein at 12:00 AM