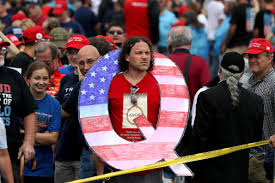 Most folks really never see nonsense like this.  That is just as well as it is meant to be disturbing.  Claims are tossed out with zero accreditation and in the case of strongly followed writers, we see a handful of these jump on the comments list immediately.

All this detracts from a readers enjoyment and it is meant to do so.  All this noise is meant to drill down of a particular and to open a narrative of trash talk to discourage the reader.

What is more amazing is that the so called deplorables absorbed all this trash talk, woke up and turned out to vote.  This is a massive rejection that cannot be easily reversed as it has hardened to supporters.  A whole new political party of self identified patriots has arisen who have absorbed the whole GOP and a real portion part of the DEM.

Even more astonishing is that Patriots ( PAT ) stay informed through interacting with and around Q.  Q is best described as the modified MIL INT data feed over which a lot of cryptic data is shared and then confirmed later by the audience.  This feed is located in the White House and augments the President's twitter feed.

This data feed has allowed a huge body of the PAT to be red pilled which is the same as woke for the so called progressives.

I am told that 8chann will shortly resurface and we will see Q again as well.


This is a typical smear screed tossed out in response to an item.


Your so stupid. Just so damn stupid. You had me going for a minute, for most of those articles I thought you might of had some intelligence. But nope you blame Democrats and ya think Trump isn't Swamp Thing.


So who was in office when Epstein was first convicted in Florida?

This is you thinking, "I can't admit it was a Republican then my whole conspiracy against the Democrats won't work. I know I just won't mention it in my article."


Here's another question who was the head of the DOJ in 2008? I wonder if he was the one that told Acosta to go light on Epstein.


Then figure out what his connection is to Giuliani. Let me tell you their pretty close.

Let me help you, Giuliani the president's lawyer, is buddy buddy with Mukasey (head of DOJ in 2008), Mukasey told Acosta to go light on Epstein. It's not like Trump ever had a private party with Epstein or anything, right.

I know you're a tool and you already pounding out a tool rebuttal but that is what is expected of a dumb dumb.

You're a tool because you just repost other peoples articles that are clearly dumb.


The real question is who was entrapped by Epstein, who did he give that info to?


Republican / Democrat that is just a game to keep stupid people dumb. Wake up and quite posting trash.
Posted by arclein at 12:00 AM