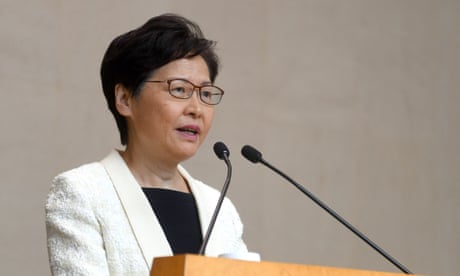 This is good news.  The CCP has just backed down and this is huge.  In the short and medium term, the unrest will now start to decline.  This obviously sends a message to 1,300,000,000 Chinese that a sustained strike will ultimately force the CCP to back down.

Recall that we also have a massive Naval exercise just to the south as well.  Had the PLA struck, the resources were in place to intervene directly.  If that does not give you pause, then what will?

The Chinese economy is now badly weakened and they need a major trade deal as soon as possible in order to quell rising unrest.

Beijing's Hong Kong compromise is surely too little, too late

The decision by the Hong Kong leader, Carrie Lam, to withdraw the extradition bill that provoked months of turmoil represents a major and unexpected concession from Beijing, but is almost certainly too little, and too late, to end the protests.

In June when millions first poured into the streets in peaceful protest, a promise to ditch the law might well have muted the burgeoning popular uprising. But Lam is only acting after months of police brutality, thug attacks on protesters, mass arrests, and barely veiled threats of security intervention from mainland China.

“This is a government which has backed police abuses, threatened to use unlimited emergency powers, banned peaceful assemblies and arrested more than 1,000 protesters,” said Kenneth Chan, a professor at Hong Kong Baptist University and former lawmaker. “Having gone through all this, few could thank Carrie Lam today.”

Over the last three months, a movement born out of concerns over one law has morphed into something much broader. Demonstrators have drawn up a list of five key demands, including a public inquiry into police violence, amnesty for arrested protesters and democratic reforms to bring universal suffrage.

Many protesters saw Beijing’s concession as meeting only the “easiest and ‘cheapest’” of their five demands, said Lokman Tsui, an assistant professor at the journalism school of the Chinese University of Hong Kong.

“In the last few weeks the bill hasn’t been on most protesters’ minds, actually,” he said. “Instead it’s the government’s response to the protests, the way they tried to silence and suppress the protesters – by using teargas, inappropriate levels of force, arresting people for protesting etc – that is at the heart of the ongoing protests.”

The law would have allowed any resident or visitor to Hong Kong to be sent to mainland China to face trial in opaque, politically controlled courts, in effect destroying the legal firewall that underpins Hong Kong’s economy and its political freedoms.

It spurred unprecedented protests because many in the city, including those who normally steered clear of politics, saw it as an existential threat to both their livelihoods and way of life.

The decision to drop it is certain to have been sanctioned by Beijing, which is balancing a desire not to look weak, and a fear that concessions will only embolden protesters, with concern over the political and economic toll of the protests.

Hong Kong is deeply embedded in the southern Chinese economy, and is an important portal to international financial markets for the whole country. The turmoil has also come as the trade war between China and the US deepens.

The stakes are getting higher for both authorities and protesters as 1 October approaches, the 70th anniversary of the founding of communist China. Lavish national celebrations have been planned to mark the date, and the president, Xi Jinping, is unlikely to want them overshadowed by unrest in Hong Kong.

Demonstrators have not been deterred by police violence, mass arrests or threats of greater use of force, and so the decision to withdraw the bill may have been a first attempt at compromise. But there are also fears that Beijing may just be paving the way for the use of force, by allowing Chinese authorities to claim they tried and failed to compromise.

“My worry is that what she did is part of Beijing’s blueprint to prepare a heavy crackdown,” said Chan. “The state propaganda officials have on numerous occasions argued that the movement ‘is no longer about the law, its subversive and anti-China’.”