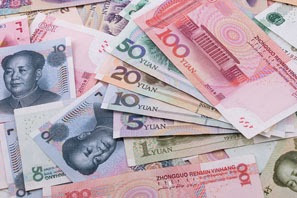 Fundamentally, Chinese capital reserves have been contracting steadily for the past three years. The knock on is that this forces a contraction of Chinese trade.  After all, you have to have a working capital float.

We have seen this over and over again.  The worst case of fiscal insanity is Venezuela where a positive trade balance still generated a currency collapse.

It does appear that China is walking this road since its internal RMB market is actually sealed off from the external market.  Of course, they are now trying to borrow cash and all that.

The item to focus on is the interview podcast at the bottom.

The reality is that China can not pay those tariffs and so far they have not been able to push them onto their customers.

In the meantime we have a developing global contraction as well while their foreign partners are now bolting.

What Trump really gains by calling China a currency manipulator

China fails to meet two of the three criteria set by the US Treasury to identify currency manipulators
So exactly who is manipulating who?


The Trump administration’s designation of China as a currency manipulator may be more a symbolic move than a substantive one, but it is yet another step in the escalation of conflict between the world’s sole superpower and its biggest, fastest-rising competitor.


The US Treasury Department’s decision came on August 5, the day the yuan dropped past the psychologically significant value of seven to the dollar for the first time in over a decade.


The currency manipulator label did not warrant any immediate action, but requires Washington to have “enhanced engagement” with Beijing. However, both sides have engaged in trade negotiations – which have also covered currency issues – for two years without reaching any agreement. On top of this, the escalation of conflict would only increase the chance of a suspension in the China-US talks scheduled for September and thus further reduce the chance of a near-term trade deal.

Currency manipulation would certainly make a difference to the trade war, as a weakening currency may help a country lift its exports. A weaker yuan would make Chinese goods cheaper, as it helps offset the negative impact of punitive tariffs imposed by the Trump administration. Meanwhile, the relatively strong dollar will also make American exports relatively more expensive for Chinese consumers.

Beijing has repeatedly pledged that it has no intention of using the yuan as a tool to manage the impact from international trade disputes. In a July meeting on the sidelines of the G20 summit in Japan, US President  Donald Trump and his Chinese counterpart Xi Jinping agreed to refrain from competitive devaluation of currencies as a toll in the trade war.


When announcing the designation, the Treasury said China had “a long history of facilitating an undervalued currency” and had taken “concrete steps to devalue its currency” in recent days to gain an unfair advantage.

As it happens, the US has a long history of waging currency wars in Asia. Washington designated both

Taiwan and South Korea as currency manipulators in 1988, the year Congress enacted its currency review law.

In 1994, China became the most recent country to receive the designation, though this was not the first time it had been so labelled. The Roosevelt administration in 1934 branded the Republic of China – then under nationalist rule – as a currency manipulator.

US law sets out three criteria for identifying currency manipulation by a trading partner: a major global current account surplus, a significant trade surplus with the US, and persistent one-way intervention in foreign exchange markets.


China is neither a free-market economy nor a true currency manipulator, as its current situation fails to meet two of these three criteria. That is why the Treasury refrained from naming it a currency manipulator in its May report, though it did list China among nine countries that needed ongoing monitoring.


Indeed, China, as a transitional economy, has a long history of state control on exchange rates. However, its exchange rate regime has become much more flexible since it began gradual reforms to scrap its state-planned fixed exchange rate in 2005.

China thinks it can weather trade storm. It can, but not for long


China’s central bank, the People’s Bank of China, had intervened in the foreign exchange market in an effort to prevent excessive fluctuations for long periods from roughly 2003 to 2013.


That is why the yuan has been relatively more stable than several emerging market currencies, including the Russian rouble and the Turkish lira.


Today, the Chinese government still heavily influences currency markets. While most free market economies let their exchange rate “float” according to the vagaries of traders in financial markets, the central bank plays a critical role in setting a daily central parity, allowing the yuan to move above and below that level by 2 per cent.


Nevertheless, Beijing’s intervention does not aim for competitive devaluation to gain an advantage in trade. Rather, the People’s Bank has been defending against yuan depreciation pressure since mid-2018.


Meanwhile, China’s major global trade surplus has decreased steadily in the past five years. China in 2018 registered a five-year low in its trade surplus, which came in at US$351.76 billion, down 16.2 per cent from 2017. The decline of China’s holdings of US Treasuries is also evidence of its decreased international reserves.


Thus, if Washington could designate Beijing as a currency manipulator, it should have done so many years ago, not now. It sounds absurd that the Treasury’s decision is based only on the yuan’s movement during a single day, or simply because it passed below the seven-per-dollar level.


The 2 per cent daily drop is a likely market reaction to the administration’s decision to impose a new 10 per cent tariff on US$300 billion worth of Chinese products from September 1. Even speculation can drive the 2 per cent price fluctuation on any trading day.


Policymakers in Washington may see Beijing’s inaction as a political message, for Chinese regulators had not allowed the yuan to break the barrier in recent years, not even during the strong capital flight in 2016 that followed the stock market meltdown in 2015.


This time, ironically, Beijing’s “fault” is that it has not undertaken large-scale market intervention to support the politically significant seven-per-dollar level.


Therefore, the designation may be more a political move or diplomatic tactic than an economic decision, the kind of bullying and propaganda campaign that Trump has repeatedly used in an effort to force Beijing to compromise in the ongoing trade talks.


It is also a declaration that the Trump administration is escalating the economic war with China, as it would help fuel more global criticism over China’s state capitalism and its unfair trade policies.


Washington may use the designation to pressure its close allies in free economies to take a more aggressive stance against what they also view as legitimate grievances with China, as many of these economies share Washington’s views on issues such as Beijing’s industrial policy, market access, intellectual property theft and forced transfer of technology.

A currency war with China could also serve Trump’s domestic agenda, as re-election campaign managers might find it helps unite domestic political alliances across party lines. It comes amid a growing bipartisan belief that it is time to get tough with an increasingly assertive and authoritarian state that is undermining America’s economy, interests and values, as described by several US policy statements.


Democratic Senate leader Chuck Schumer has been urging Trump to take this step since he took office two years ago. It was no coincidence that Schumer reiterated this call about an hour before Trump did it.


By extending the US-China war from tariffs and technology to currency, the White House has helped fuel US public concerns about China’s threat to its national security.


It is also part of the escalation of the war on anything and everything between the world’s main economic rivals and chief political adversaries, as both powers are engaged in a full-fledged, cross-domain competition for global supremacy, influence and leadership. ■