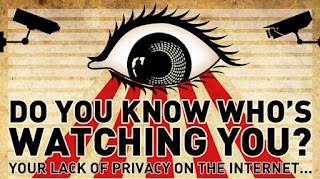 Here is the problem.  Our technology is completely able to track every key stroke and also increasingly to also interpret those key strokes on a continuing basis.  Since it is possible, it is been done.  The terroist excuse is merely a licence for all this.
As we have also discovered, all our laws protecting individual rights are simply ignored on the basis of it you do not know, then you need not know and we can do it anyway.  Certainly the past administration went for it all and in fact weaponized it a well.
In the past, our key protection has been that the sheer weight of data  prevented significant access and observers were really limited to the use of informants.

All of a sudden we have a surveillance system quite able to track folks accessing material produced by opponents and then labeling those as sympathizers, however true that might be.  We can no longer tell the system that this is none of their business.

Worse it eliminates true anonymity for a class of unwelcome proponents whose silencing is beneficial to a  opponent who can in fact now challenge them early on to even scare them off.
Let us look at an example that is in fact criminal and not political.
Imagine simply tracking all folks attracted to child sex sites.  Most of these will be inadvertent as the criminals are deep underground and have to set lures.  Obviously such a site will be also set up to seduce the victim as well.  Just were do you establish that the target is either a victim or even a potential criminal?
If you intercede to challenge this target you have two outcomes.
1   the target wakes up and goes away and avoids anything like that.  This is likely the majority.
2   the target developes a work around and is now lost.
So instead, you are cute and continue to monitor thousands to scant effect  looking for a truly active pathway that leads to execution.  Once in a while you may get lucky.
Here is the real problem.  With sexual deviance it is simply better to challenge early in order to strongly discourage further curiosity that could develop into an obsession and into criminality.  Why has this not been done?

The same problem applies for political discourse.  Political discourse is mostly grossly imbalanced and often encourages excess.  Blocking excess is a valid idea.  The problem is fairness and we are right back to the real problem with the Communism and Fascism who both rush to organize mobs to intimidate.

Excess evolves obsessively into at least the threat of violent action.

Now, how do we stop BIG Brother literally stepping on the left or right pedal and how do we block obsession over violence and the egregious game of mirroring one side's criminality through the Media by a brainwashed and even stupid press?  We have watched all of this.

Security teams for Facebook, Google, Twitter, and Microsoft met with the FBI, the Department of Homeland Security and the Director of National Intelligence’s office to coordinate a strategy to “secure” the 2020 elections. And by “secure” they mean to manipulate the results of the election in any way possible to get the outcome they desire.


According to a report by RT, the big tech platforms met with government officials at Facebook’s Menlo Park headquarters on Wednesday, the company has confirmed, boasting that Big Tech and Big Brother have developed a “comprehensive strategy” to get control of previous election-related “vulnerabilities” while “analyzing and getting ahead of new threats.” Those vulnerabilities and threats are the free thinkers who don’t buy the official narrative and dissent against the ruling class.


This is quickly escalating. Expect the censorship, social credit scores, and gun control talk to ramp up as the political class realizes people may not be as easily enslaved as they have imagined. Facebook has scrambled to get in front of the 2020 election after being blamed for Trump’s 2016 electoral victory over merely allowing the “Russian trolls” to buy a bunch of ads. Most of those ads appeared after the vote and had nothing to do with the election. Google, on the other hand, actively attempted to manipulate and rig the election in favor of Hillary Clinton, and the evidence of that indiscretion is rapidly becoming overwhelming.


Google’s potential to sway elections has been the subject of Senate hearings, and yet the company has remained silent on addressing the problem. Subsidiary YouTube, meanwhile, conducted another round of mass censorship last month even while declaring it was an open platform for controversial ideas.


Facebook insisted last week it had tightened its rules for verifying purchasers of “political” ads, for real this time, after the 2018 contest showed they could still be duped into running obviously-fake ads “paid for by” the Islamic State terror group and Cambridge Analytica.


For all intents and purposes, this meeting was to make sure certain ideas are censored so that only government-approved opinions can be made available as information. The electoral meeting of the minds came less than a week after the Pentagon’s Defense Advanced Projects Research Agency (DARPA) declared war on deepfakes and other potentially discord-sowing information (like memes), promising to neutralize all “malicious” content within four years – if not for this election, then certainly for the next.
Posted by arclein at 12:00 AM