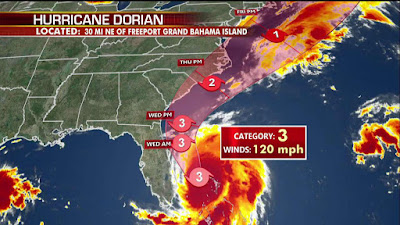 Mid day Tuesday,   Dorian continues to sit stalled on top of the Bahamas losing energy.  It is now down to a category 2 storm.  The risk to Florida is now dropping to that of a tropical storm.  The most likely path is now North to North East and not heavily into the coast anywhere.    This is all great news and completely unexpected.

Sadly the Bahamas has lost half of its housing and folks have certainly died as well.  We hope the the refuges saved most of them.  At this time we know that the airport and the hospital has been badly whacked.

At this point, we have surely avoided what was certain to be a massive smash up along the Florida coast.  I never thought that I would be writing these words.

On the global front, the world is truly bracing for Hurricane Trump.  The powerfully expanded US economy and the generally weakened state of Global trade has given him a powerful hand in which to do several things with a measured pace.  I emphasize the measured aspect of his actions.  Economic change does take time and all you can hope to do it accelerate in the appropriate direction.

A             He is slow cooking the CCP .The Tariff tax is hugely damaging and the CCP must continue to subsidize in order to hang on to their market share and general gains.  The price to pay is actually the complete removal of the CCP and it replacement by a formal and effective democracy.   All the mechanisms of authoritarian control will need to be deconstructed.  He has all the time in the wolrd and they do not.  It would be handy to convert China into a Communion of Chinese States as well, but this is surely decades away.  The same applies elsewhere to reverse the historic drive to imperial hegemony.

B            He can pronounce a global Marshal plan in which one trillion dollars of USA dollar credits are extended to the whole globe or to those countries meeting our standards of democratic governance with ample room for Presidential exceptions.  The avowed purpose is to assist the transition of global business out of China to anywhere else.  Doing this will turn the current movement into a full stampede that will allow Chinese business men to escape the clutches of the CCP as well.  All this will serve to rapidly expand the global economy and neutralize Chinese exploitation of the Global system over the next decade.  During this time the CCP will be seen for what it happens to be and stagnation should force them out..

C             It will likely turn out that agents of the CCP have been subsidizing the DEMS.  If this is true, then the political left in the USA will be then hunted into extinction.  Certainly the whole weight of the US government has been put on alert and the core evidence is even now been gathered. Nothing will happen without a complete evidence picture.

D             Control of all the global central banks will be returned to the national governments.  hopefully central banking powers will also be extended to large cities and similarly sized States as well.  Gold will likely be handily supplanted by a massive pool of mature Bitcoin like products.

The big question is whether this is the future envisaged by Mil Intel in particular.  What is clear is that a hurricane is truly upon us and all most of us can do is watch.  I see scant evidence of B yet, but it is important and will usher in an incredible twenty year global economic expansion led by the USA.  A,C, & D are major corrections in our course that eliminates parasitic forces clearly at work.

However it is B that will break those forces and actually force them to transform and become actual allies.