Wait. *ANOTHER* interstellar object is passing through the solar system? 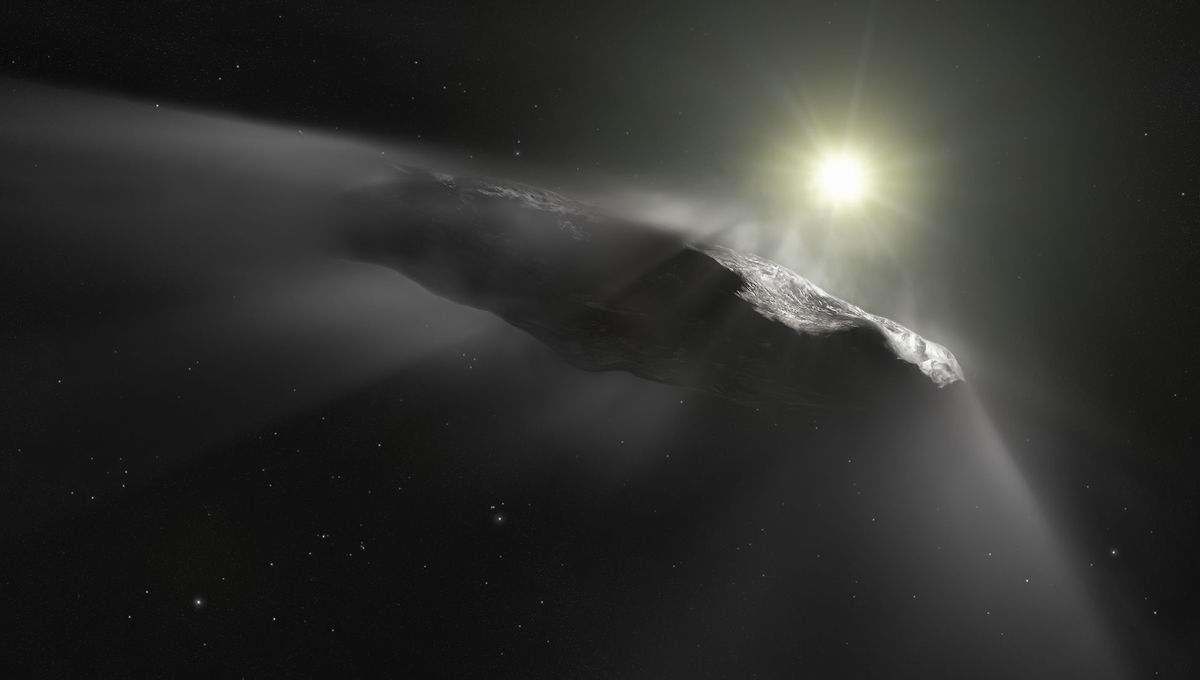 This is great and it has the prospect of possibly blossoming as well.  As a comet, it may well never have been out gassed before.  Thus it could become as bright and large as Haley did originally.

The other good news is that we are now beginning to discover these.  As our observation density keeps rising, it is reasonable that we do capture images of a fair percentage of whatever the real traffic through ou solar system.

It is also plausible to position chase satellites as well able to accelerate to a matching velocity on the appropriate path that intersects even within our solar system.  Thus intersection will become a valuable tool to sample incoming material.

'Oumuamua, the first object ever seen passing through our solar system from interstellar space, is shown in this artwork to be faintly outgassing as the Sun warms its ice. Credit: ESA/Hubble, NASA, ESO, M. Kornmesser


Wait. *ANOTHER* interstellar object is passing through the solar system?

Very big news: A comet discovered just a couple of weeks ago appears to be one the most rare and exciting of all cosmic beasts: An interstellar visitor — literally an object coming from interstellar space, from an alien star!

The object is called C/2019 Q4 (Borisov) — though that name may change, as I'll get to in a sec — and it was discovered in observations taken on August 30, 2019 at the Crimean Astrophysical Observatory by Gennady Borisov using a custom 0.65-meter telescope. It didn't take long to find the object had an, um, unusual orbit, and follow-up observations taken a few days later using a much larger telescope confirmed its strange nature. There have now been quite a few observations, and although many mysteries remain, we can be pretty sure this thing came from Out There.

To be probably too careful here, I want to say that there is a slim chance it's not from outside our solar system, but honestly at this point I wouldn’t put much money on that. As more observations come in it looks more and more like this is the real deal. 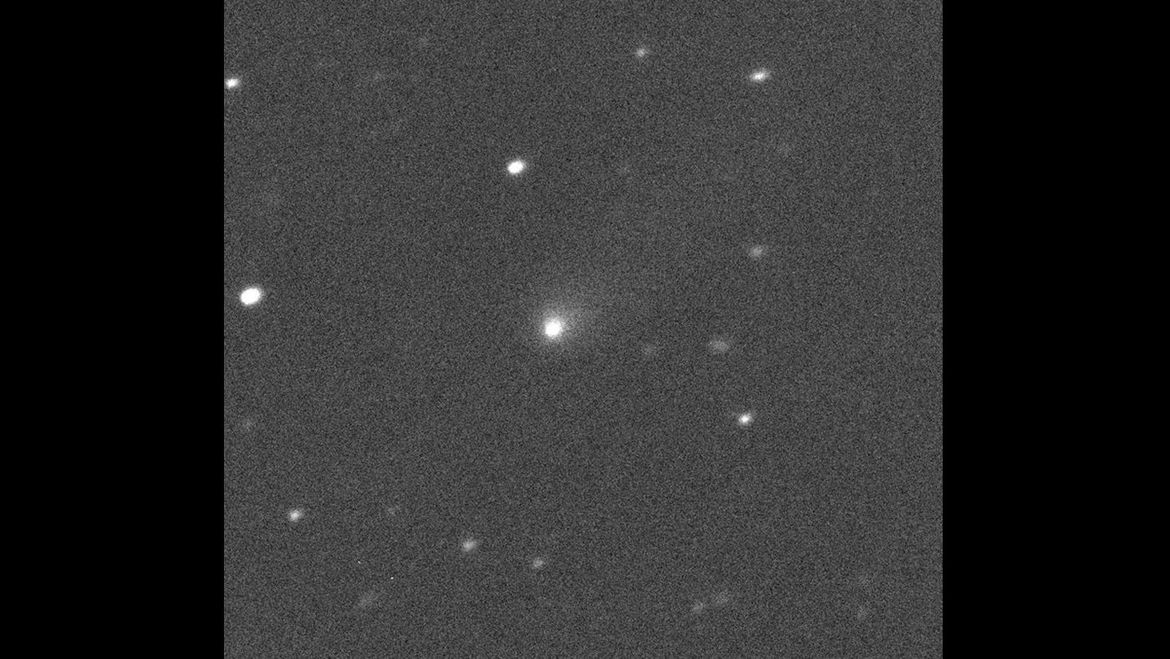 Having said that, there are two ways to know this object (let's call it Q4 for now) is truly interstellar: By its velocity, and the shape of its orbit.

The velocity is a dead giveaway: It came into the solar system moving at nearly 33 kilometers per second relative to the Sun. That is way, way faster than a solar system object that far out can travel, and in fact is easily fast enough to escape the Sun's gravity forever. As it approaches the Sun it picks up even more speed; right now it's 420 million km from the Sun (over 500 million km from Earth) and moving at 41 km/sec. That’s nearly 150,000 kilometers per hour! It could get from the Earth to the Moon in just over two hours, or cross the continental US in about two minutes.

Again, I want to be careful here: It is technically possible for an object to move that fast that far out if, say, it has a close encounter with Jupiter. Jupiter's gravity combined with its orbital motion around the Sun can kick a smaller object up to very high speeds. However, tracing the object's orbit backwards shows it never came anywhere near any gas giants. In fact, the orbit is hugely tilted to the plane of the solar system, and it’s just now punching through that plane. So it does look like it came in screaming fast. 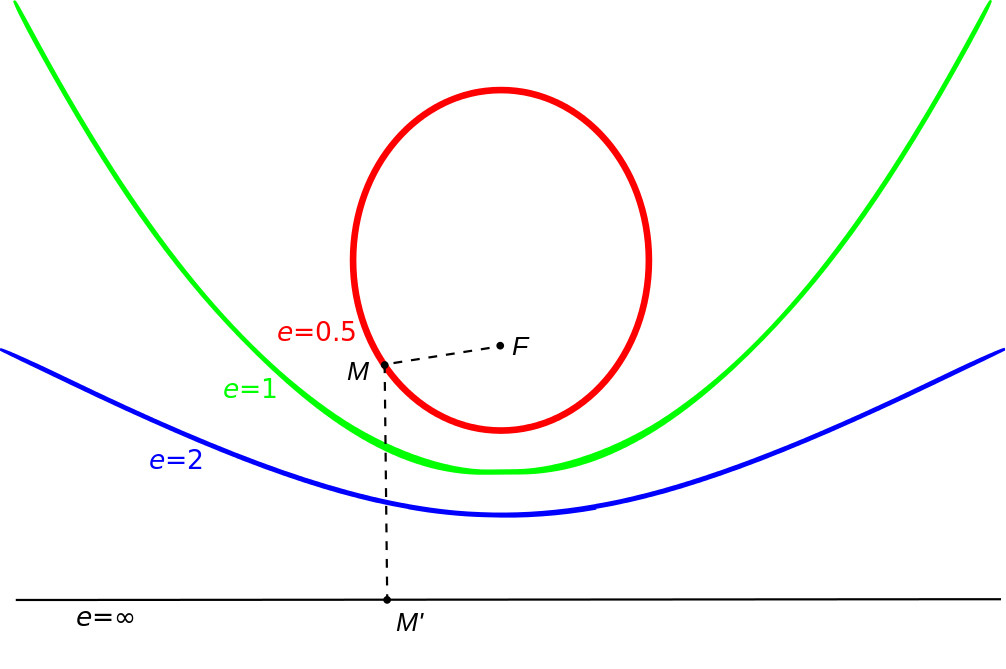 Shapes of various orbits. A mild ellipse (red) has an eccentricity of less than 1, a parabola 1 (green), and a hyperbola greater than 1 (blue). Credit: Wikipedia / Seahen

The shape of the orbit is the other way to know. Objects bound to the Sun, like planets and asteroids, move in elliptical orbits. Give them more energy and the orbit gets stretched out, more elliptical, and if you give them just the right amount of energy the orbit becomes a parabola. Objects on orbits like that are no longer bound to the Sun: They have enough energy to escape the Sun's gravity.

Give the object even more energy and the orbit becomes hyperberbolic. That too means it has enough energy to escape (velocity and orbital shape are related and dependent on one another; when I say we give the object more energy you can think of it as making it move faster). These three kinds of orbits are distinguishable by their eccentricity — how far their shape deviates from a circle. An eccentricity of 0 is a circle, and from 0 – 0.99999… it's an ellipse. An eccentricity = 1 is a parabola, and if it's greater than 1 it's a hyperbola.

At first, the orbit of Q4 was very hard to determine. That's typical of early days when a comet or such is found. You need a long baseline of time and lots of observations to get a good orbital calculation. As I’ve written before:

An analogy I like is with baseball: Imagine you're in the outfield and the batter gets a hit, but at the moment his bat contacts the ball you have to close your eyes. Now, where will the ball be in, say, six seconds? You can't really know because you couldn't track it long enough to figure out its path. Same with these objects in the solar system; the longer we track them the better we can understand their orbits.

The first few observations showed that Q4 had an eccentricity of more than 3. That's a whopping huge value, and of course everyone was skeptical. There are different ways of calculating the orbit from observations, and while they produced different values, the eccentricity stubbornly refused to change much. The current value calculated is e = 3.08.

That’s really, really interstellar. This thing is not from around here.

An animation of the currently calculated trajectory of the potentially interstellar object C/2019 Q4. It comes in from high above the plane of the solar system an a hyperbolic orbit, and heads back out into interstellar space. Credit: NASA/JPL-Caltech

Now you may remember the saga of 'Oumuamua, discovered in 2017 and the first interstellar visitor found. Its identity has been hard to pin down; it was thought to be a comet, then an asteroid, and then maybe a comet again. Whatever it is, its eccentricity was found to be about 1.2. So Q4 is coming in on a far more hyperbolic path, and much more rapidly. Given how bright it is at its distance, the solid nucleus is probably several kilometers in size; 'Oumuamua was far smaller, likely 100 meters long or so.

Also unlike ‘Oumuamua, we can be pretty sure Q4 is a comet. It can be seen to have some activity around it; gas is escaping from it as ice vaporizes while it nears the Sun. So at least that’s clear! I hope that some big ‘scopes will steer its way in the next few weeks so we they can take spectra and see what gases are in the object’s tail.

In fact, a big advantage we have on this comet versus ‘Oumuamua is that we caught the latter on its way out, so it just kept getting fainter. Q4 is still on its way in, and will pass the Sun (the point in its orbit called perihelion) in early December. It’ll be closest to Earth a couple of weeks later, passing about 300 million km from us. Current estimates are that it will get to about 15th magnitude, which means you’ll need a big ‘scope to see it. Happily, the planet has plenty of those. A few in orbit, too. We’ll be observing this object a lot. 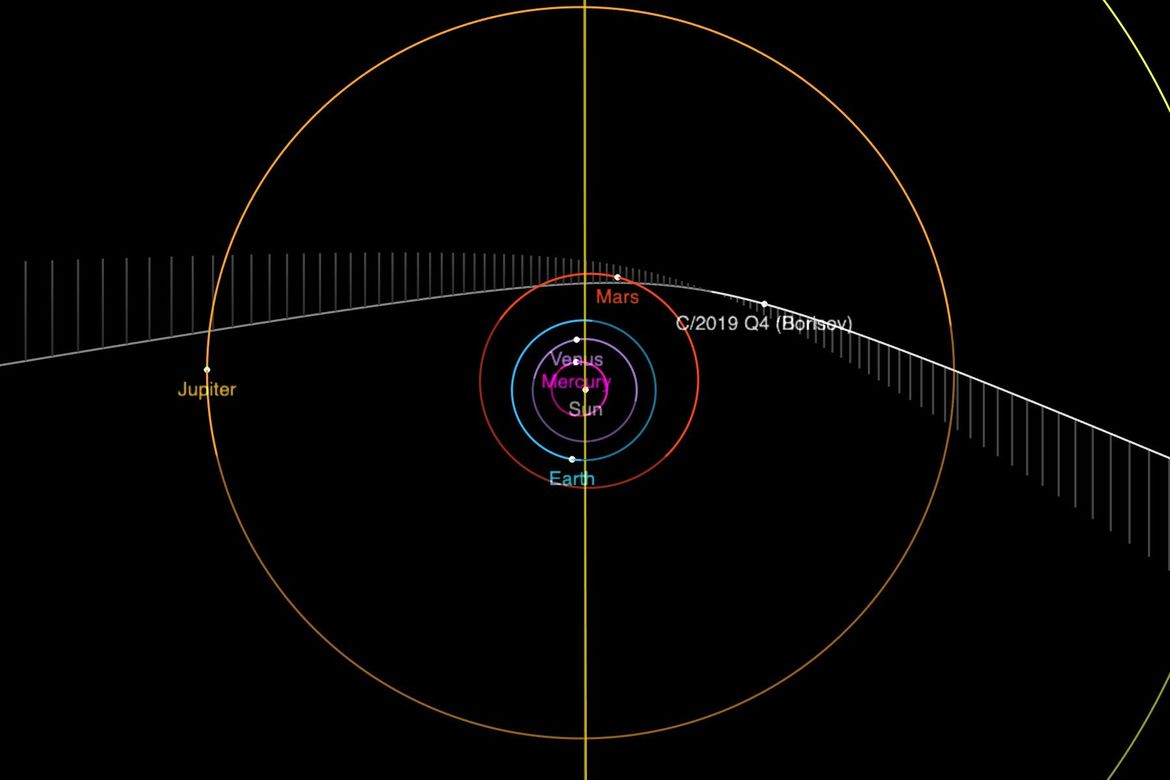 A diagram of the orbit of the potentially interstellar object C/2019 Q4, showing its position on Sept. 13, 2019. In this view we’re looking straight down on the plane of the solar system, and the comet comes right to left, moving down toward the plane, passing between the orbits of Mars and Jupiter. Credit: NASA/JPL-Caltech

So why is this so exciting? Well, besides just the fact that IT’S FROM ANOTHER STAR, there’s a lot of fun stuff we can learn from it. What’s it made of? What’s the surface like? How much dust versus ice is in it? Where did it come from originally?

That last one is tough to answer; tracing the orbit backwards is hard, though currently it backtracks to a spot in the sky in Casseopaeia. That’s interesting, because that’s in the plane of our flat, disk-shaped galaxy where most stars are, and from a particularly dense region, too. I wonder if we’ll get a decent enough orbit for Q4 such that we can trace it back to a particular nearby star? That would be amazing.

Also, we don’t know how many interstellar objects pass through our solar system. We’ve only seen two, counting this one! We know that early on, when a solar system forms, a lot of material is lost when chunks of rock and ice pass too close to forming planets, ejecting them into deep space. One very intriguing hypothesis I saw said that these wandering objects can actually help planets form in the first place! So it's possible we owe our existence to objects like 'Oumuamua and Q4. Amazing. 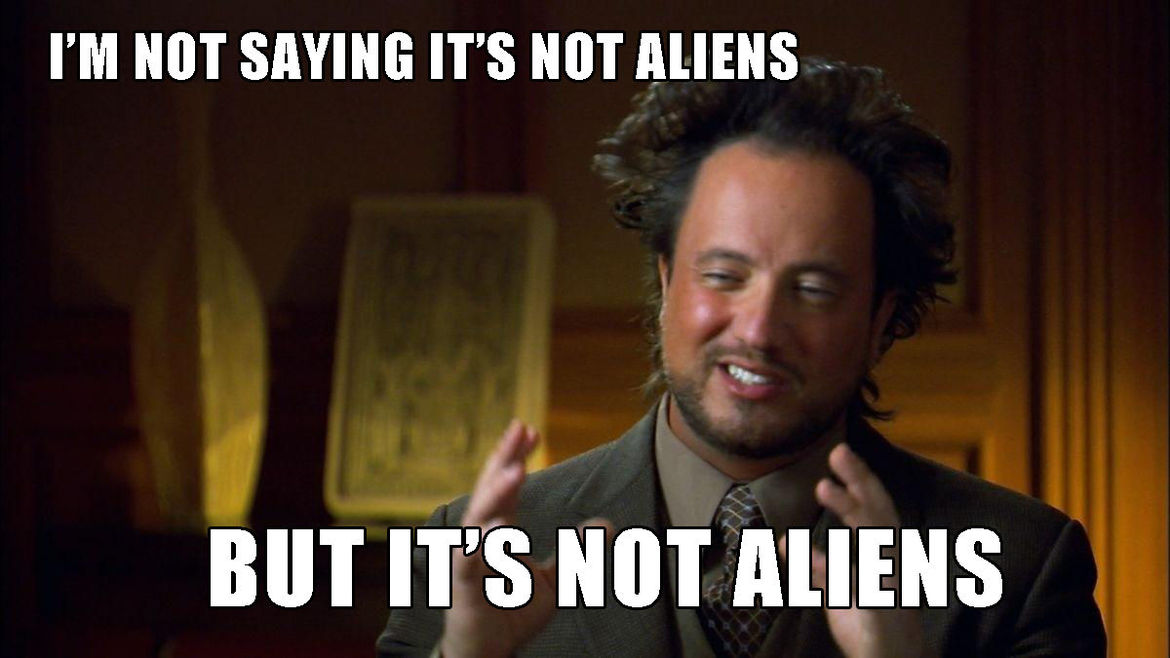 It's not. Credit: Phil Plait

Oh, one more thing: I mentioned the name of this object may change. When 'Oumuamua was thought to be a comet, its official designation was C/2017 U1 (Pan-STARRS); the C stands for comet. That was changed to A for asteroid later… but then, after some consideration, the folks from the Minor Planet Center decided to add a brand new designation: I, for interstellar.

Once C/2019 Q4 (Borisov) is confirmed to be from another star, that C will likely change to an I. What won't change is the year and letter/number combo, and of course the name of the person who found it: Borisov. He must be having the time of his life right now.

A lot of astronomers will be joining him. You'll be hearing a lot about this alien comet over the next few months. And, if I may be so speculative myself, this may just be the beginning. Two of these things passing in just two years implies they are more common than we thought. As bigger survey telescopes come online and sweep more of the sky, we may get lots of chances to add an I to the names of these cosmic visitors.
Posted by arclein at 12:00 AM