Venezuela's Crisis: What's Oil Got to Do with It? 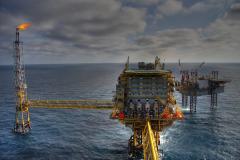 Nothing whatsoever of course.  Oil only allows a handful to run away with the foreign exchange.  worse in south America you have an elite culture that is into acquiring and then stealing foreign exchange and running off.

All these countries need community credit creation by way of the rule of twelve and all this nonsense will end in a trice.  The sooner the better.
Once that happens, the ongoing ugly will end as well.

Venezuela's Crisis: What's Oil Got to Do with It?

After over three years of following the disastrous effects of socialism unfolding in Venezuela I can confidently say that 99% of the articles I’ve read on the issue will sooner or later point out that Venezuela’s crisis is not only surprisingly dire, but rather counterintuitive given that it is one of the most oil rich countries in the world, with probably the largest proven reserves. As a result, most analyses will conclude that it is the current president’s incompetence on the one hand, and the fall in oil prices in the last 5 years on the other, that have brought about the collapse of the once-prosperous South American economy. The latest example is the short video posted by The Economist, which, in summarizing Venezuela’s recent history, explains that “after Mr Chavez—who had spent generously when oil prices were booming—died in 2013, oil prices crashed and… Maduro inherited an economic crisis which he made worse with his ineptness. The country plunged into chaos.”


That the gravity of the situation is still surprising to most commentators when it should have been expected long ago is something I’ve discussed before. I would like now to focus on the implicit economic fallacy that underlines the assumption that a country is bound to be inherently prosperous if it owns significant natural resources, particularly oil.


First of all, it is merely an impression that Venezuela was indeed prosperous in a healthy way at some point in the past. The large-scale exploitation of its rich oil reserves, first discovered before the Spanish conquest, began only in 1910. Before, Simon Bolivar’s 1811 decree stated national ownership of all domestic mines and production was minimal at first. The beginning of the Venezuelan oil industry was also still plagued by government intervention, as drilling and refining were still only permitted via governmental concessions—usually offered to close friends of the 1920s Gómez administration. Later in 1975-76, a monopoly of oil production was handed to the state-owned enterprise Petroleos de Venezuela (PDVSA), then the world’s third largest refiner after Royal Dutch Shell and Exxon, as the Venezuelan oil industry was fully nationalized.1 Although foreign companies were allowed minority partnerships, the taxes they had to pay were significantly increased during the Chavez administration.


During this turbulent history, oil production waxed and waned, following state directives rather than market incentives, yet booming oil prices in the early 2000s allowed for large cash windfalls. But eventually after 2005 all revenues from it began to be rerouted by the government into Chavez’s lavish social missions, which covered everything from free health clinics to neighborhood basketball courts.


It is this period that most commentators see as one of great Venezuelan prosperity. But this prosperity was illusory, a mere veneer for the consumption of capital that was occurring. Capital goods—especially those in the oil industry—were being misused and depleted through central planning. For a while, this created an apparent wave of prosperity and development that Joseph Stiglitz called “impressive” at the time and that Mises had long before likened to burning one’s own furniture to heat up the room. But as soon as capital wore out, the façade collapsed and the centrally planned mismanagement of the resources was revealed. No matter how rich in resources the country still is, those resources were and still are used inefficiently and wastefully. Alternatively, Switzerland is very poor in mineral resources—or any natural resources, mind—and has not been plunged into an inflationary crisis.

Chavez not only failed to eradicate poverty, as he claimed, but he laid the country squarely down the path of socialism and all its disastrous effects were merely magnified by Maduro. The latter is, contrary to its Western critics, not inept, but rather a committed and consistent socialist dictator, who only escalated and tightened, in good socialist fashion, government control over everything from currency and prices to political dissent and free speech. This, and falling world oil prices, certainly sped up the disintegration of the Venezuelan economy, but did not cause it.


What originally caused the Venezuelan crisis was not oil, nor can oil now be inherently its cure. The cause of Venezuela’s collapse is the stunting of domestic capital accumulation that began with monetary and social policies of the preceding century and whose effects are now fully felt. And it is the same brand of poor economic policies and government spending (albeit not in the same degree) that is sought after and implemented in the U.S. or Europe, where it is touted either as innovative, stimulating, or anti-cyclical.


In 1952, in The Plight of Underdeveloped Nations, Mises was discussing Iran’s plans to nationalize their oil industry and was pointing out the precise—and since unchanged—hypocrisy of the West in criticizing socialist policies they were themselves implementing at home:


Mises’s further analysis in that essay—quoted below at length—can be used not only to cut through to the heart of the current Venezuelan problems, but to lay out the only solution for overcoming the crisis and allow for true prosperity. And as you might have guessed, it does not involve mentioning the large oil reserves at all:


What the underdeveloped nations must do if they sincerely want to eradicate penury and to improve the economic conditions of their destitute masses is to adopt those policies of “rugged individualism” which have created the welfare of Western Europe and the United States. They must resort to laissez faire; they must remove all obstacles fettering the spirit of enterprise and stunting domestic capital accumulation and the inflow of capital from abroad.


But what the governments of these countries are really doing today is just the contrary. Instead of emulating the polices that created the comparative wealth and welfare of the capitalistic nations, they are choosing those contemporary policies of the West which slow down the further accumulation of capital and lay stress on what they consider to be a fairer distribution of wealth and income. Leaving aside the problem whether or not these policies are beneficial to the economically advanced nations, it must be emphasized that they are patently nonsensical when resorted to in the economically backward countries. Where there is very little to be distributed, a policy of an allegedly “fairer” redistribution is of no use at all. […]


The problem of rendering the underdeveloped nations more prosperous cannot be solved by material aid. It is a spiritual and intellectual problem. Prosperity is not simply a matter of capital investment. It is an ideological issue. What the underdeveloped countries need first is the ideology of economic freedom and private enterprise and initiative that makes for the accumulation and maintenance of capital as well as for the employment of the available capital for the best possible and cheapest satisfaction of the most urgent wants of the consumers.
Posted by arclein at 12:00 AM