Reserved for the Gods: Only Two Humans Have Tasted the Chinese Peaches of Immortality 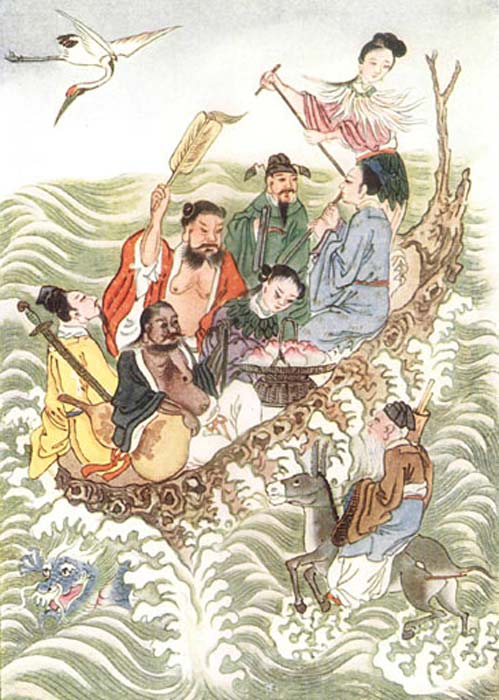 This is a nice story, but it suggests a greater truth as well.   We know that the INNER SUN is both REAL and IMPOSSIBLE.  I know this because i have meditated and been granted the experience but once.  Two others have also experienced this as well.

I do think that if we can access this SUN and allow it to fully recharge our own spirit bodies, then it allows the individual to extend his own life and to become an effective healer as well.  all forms of spiritual or miraculous healing surely draws on just this

It is noteworthy that ZEUS formed such balls and them used them to hurl lightening at targets...

Reserved for the Gods: Only Two Humans Have Tasted the Chinese Peaches of Immortalit

You may have heard of the golden apples of Greek myth, but do you know of the Chinese Peaches of Immortality? These sacred fruits have become symbols that continue to hold significance at yearly celebrations even today.

The Peaches of Immortality are a type of fruit found in Chinese mythology, specifically that of Taoism. As their name suggests, these fruits are believed to confer onto those who ate them immortality. Similar to the golden apples in the Garden of the Hesperides (as found in Greek mythology), the Peaches of Immortality are said to grow in the orchard of a Chinese goddess. It is believed that these celestial peaches only ripen after a very long time, and when that occurred, they would be served at a special banquet for the immortals.

Sacred Orchard of the Jade Pool

In Chinese mythology, the Peaches of Immortality are said to grow in an orchard belonging to Xiwangmu (literally translated to mean ‘Queen Mother of the West’), who, in some accounts, is the wife of the Jade Emperor, the supreme deity in the Taoist pantheon. According to legend, Xiwangwu resides in the mythological Kunlun Mountains. Her abode is known as the Jade Pool, and it is there that the goddess is said to have an orchard containing as many as 3600 peach trees. Needless to say, these trees produced the legendary Peaches of Immortality. 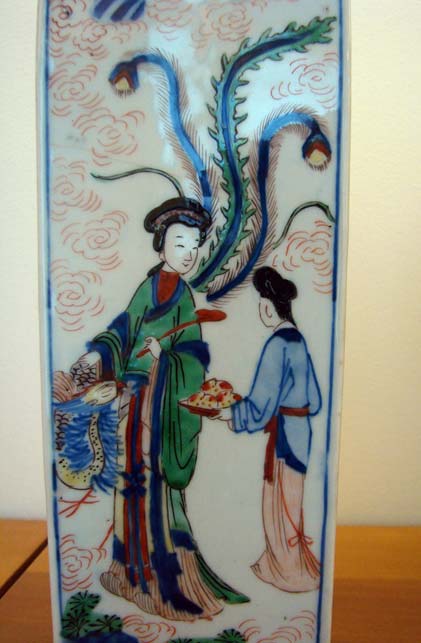 Legend states that the peaches in the orchard of Xiwangwu only ripen once every 3000 / 6000 / 9000 years. When this happens, Xiwangwu would throw a banquet to celebrate the occasion. The gods, including the famous Eight Immortals, would be invited to partake of this feast. According to Chinese belief, anyone who ate the Peaches of Immortality would be granted not only with immortality, but also with eternal youth.

Trying the Peaches of Immortality 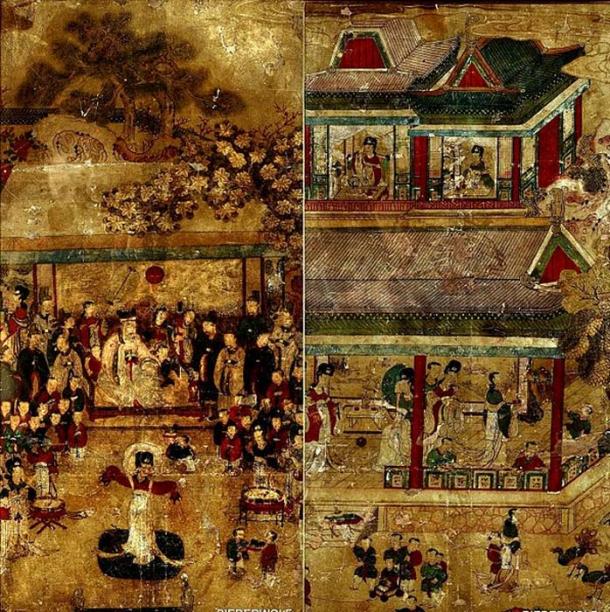 The second person said to have been given the Peaches of Immortality was the Emperor Wu of Han. The emperor is recorded to have been given several peaches by Xiwangmu. These valuables fruits were so highly treasured by the emperor that their stones were preserved, one of which is believed to have been presented to the first emperor of the Ming Dynasty. This peach stone is said to have 10 characters engraved on it.
The Peaches of Immortality were so precious that they were stolen at times. For instance, when the Emperor Wu of Han was presented with the peaches, one of his officials, Dongfang Suo, was recognized by Xiwangmu. According to the goddess, this official used to be an immortal courtier of hers at her home on Mount Kunlun but was temporarily banished to earth as a human as punishment for stealing some of the peaches.3 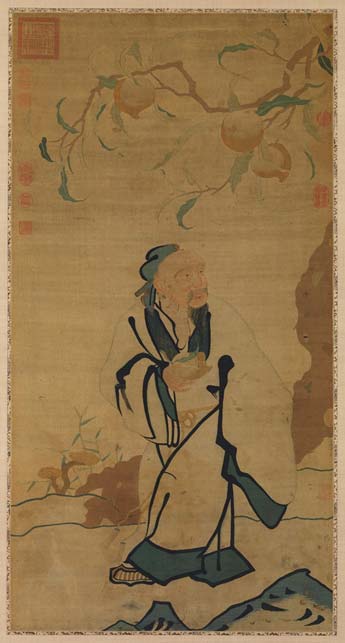 Silk tapestry from the Ming dynasty of Dongfang Shuo stealing a peach of immortality. The legend is based on the historical Dongfang Shuo, (c. 160 BC – 93 BC), a Han dynasty official who worked in the court of Emperor Wu. ( Public Domain )

The most famous theft of the Peaches of Immortality, however, is found in the immensely popular novel, Journey to the West . In this tale, Sun Wukong (known also as the Monkey King) was appointed by the Jade Emperor to be the administrator of Xiwangmu’s peach orchard. Taking advantage of this status, Sun Wukong stole and ate many Peaches of Immortality, and his misdeeds were only discovered when Xiwangmu sent her fairies to pick peaches for a banquet. 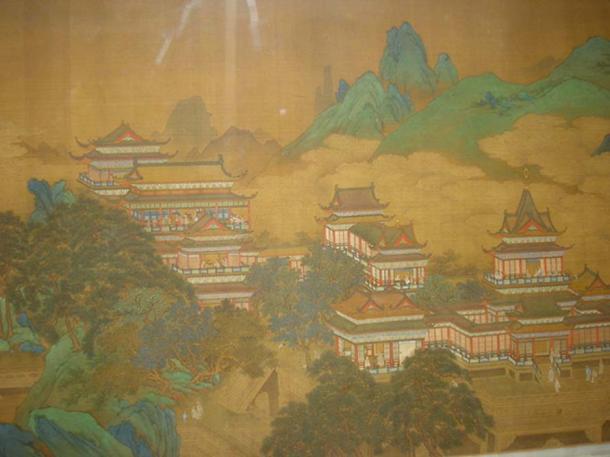 Peach Festival of the Queen Mother of the West, a Chinese Ming Dynasty painting from the early 17th century, by an anonymous artist. (PericlesofAthens/ CC BY SA 3.0 )

A Symbol of Longevity

Finally, it may be said that due to the legend of the Peaches of Immortality, this fruit has become associated with longevity in Chinese culture and is a common decorative motif. For example, images of peaches are often used to decorate objects, ranging from decorative vases to drinking cups. Moreover, peaches are closely linked to birthdays, and are represented on cards, birthday cakes, and even in the form of a special peach-shaped bun eaten on such auspicious occasions. 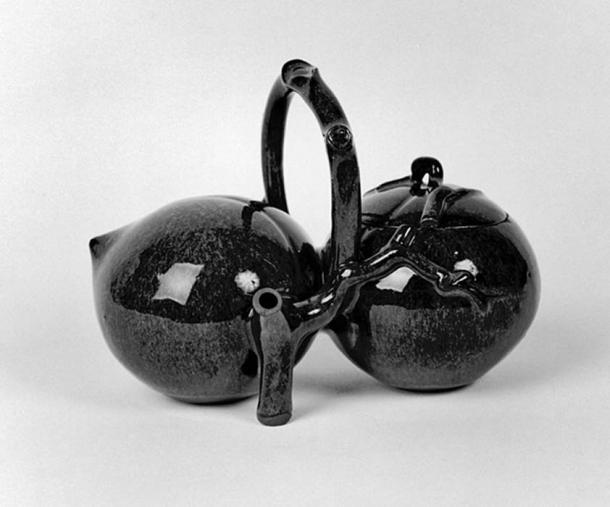 This teapot is an example of Yixing [I-hsing] ware and is glazed with a blue-brown transmutation. Peaches of immortality, which ripen only once in a thousand years, grow in the garden of the queen mother of the West, according to Taoist cosmology. The peach stands for long life. ( Public Domain )
Posted by arclein at 12:00 AM