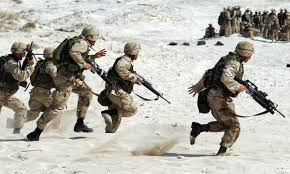 We should understand now after literally decades of USA military intervention that our approach is deeply flawed if not completely wrong.  All of it is ending badly.

A large part  of this is philosophical and goes right back to the American insistence that the British dismantle their Empire at the end of WWII.  This quickly expanded to all colonial Empires and produced what we have today.  It was all hugely unplanned and in the face of communist trouble making.  What this naturally produced was a serious power vacuum everywhere and the rise of a political class of accidental opportunists.

The British Empire was acquired almost accidentally by independent actions of adventurers who all quickly sought protection from the crown and the navy.  The crown then had to make it all pay and manage it somehow.  Formalization evolved.  The only real exception was the crown colony of Virginia which went terribly for many years at first and surely cured the crown of any other such direct investments.

What the crown did learn is that if you knock it over, you truly own it until you have fully replaced what you destroyed and made over were possible into your likeness.  This is never done by navies or too often by soldiers.  It is done by administrators with a true governance plan that includes upgrading the locals as well.

What i am trying to say is that if you intervene at all you must plan to make a temporary colony which can deal with the locals and provide financial credit to establish loyalty.  All with a plan toward successful independence but in clear political stages.

Think of Afghanistan as a colony with two different provinces and the possibility of two separate countries emerging.

Think of Iraq as a colony with three separate provinces emerging in stages.

You see my point.  The military creates the situation. The Colonial plan stabilizes and develops a succession plan.

The whole Middle East demands a full border commission and and a system of ethnic cities to accommodate the severe disunity that exists.  Without a colonial plan, we will have rampant opportunism.

Trump is completely right to be rid of this.  The military simply cannot solve it and it is late to do it correctly.  Afghanistan must break up and surely will.  This may tempt Pakistan to duke it up with the Pathans as part of Pakistan likely needs to be ceded.  Kurdistan needs to be independent and Iran needs to cede land to Kurdistan.  Iraq also needs to cede land to Iran and the balance needs to join Syria.  Ethic city states need to be also set up.  That is the historical imperative difficult to work against without ample good will.